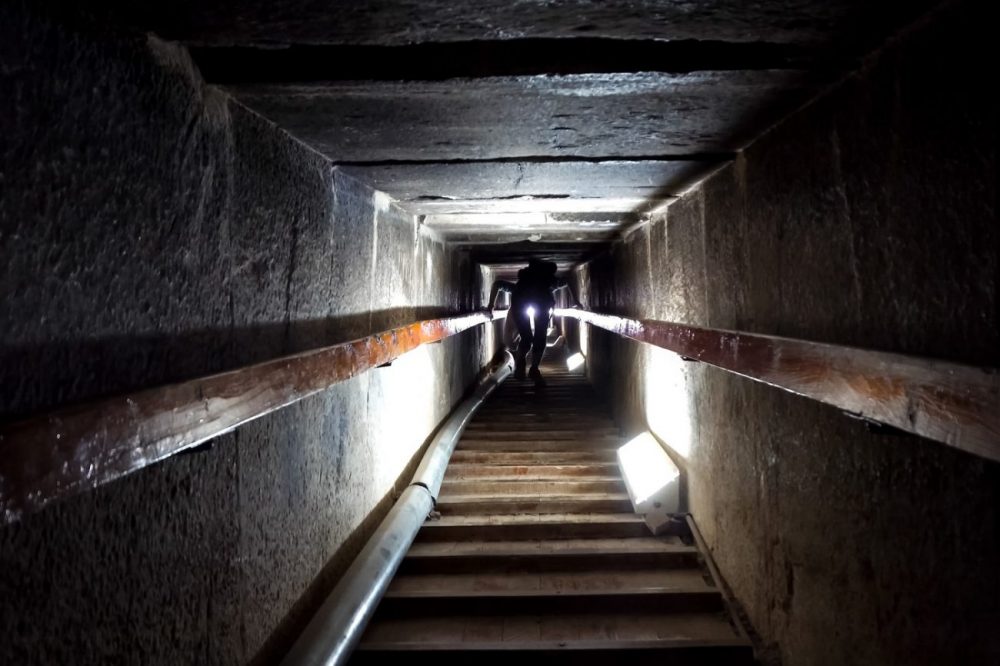 Studying Egypt, its monuments, tombs, pyramids, and mysteries hidden beneath the golden sands must be every archaeologist’s dream.

But Egypt is big. And its history is even bigger.

Despite the fact that we’ve been exploring ancient Egypt’s secrets for decades, we have still not managed to put together the massive puzzle belonging to one of the most fascinating ancient civilizations to ever live on Earth.

But if mankind is one thing then it’s persistent.

And we’ve been persistent in trying to uncover one of the biggest mysteries of the ancient Egyptian Civilization.

Just how on Earth did they build the Great Pyramid of Giza around 4,500 years ago?

The Great Pyramid of Giza is such a fabulous structure, that some of us have even doubted the ability of mankind building it.

Some have resided to the alien theory, saying that aliens apparently traveled from a very a distant solar system to Earth, and help build a massive pyramid in the middle of the desert.

We know they were advanced. They were smart. They had kick-ass ideas.

And somehow, they made the impossible really possible.

According to Egyptologist, in a 20-year period, they built what would eventually become the only standing ancient wonder of the world.

And although the Great Pyramid of Giza was built around 4,500 years ago, we’ve still not learned everything about it.

In fact, till’ this date, the pyramid continues baffling experts.

In this article, we bring you 3 incredible discoveries that were made inside the pyramid, leaving experts perplexed.

The Great Pyramid is awesome.

And like anything else dating back from ancient Egypt, it’s packed with mystery.

The Scan Pyramids project used muon particles originating from interactions between rays from space and atoms in our planet’s upper atmosphere to ‘peer’ inside the pyramid, allowing ting them to map what’s exactly inside the pyramid.

This technique has been used in the past to help experts see through cathedral walls, and even Ancient Maya pyramids.

They’ve used muon particles to see inside volcanoes and make countless fascinating discoveries that would not be possible in any other way.

The void discovered by experts was found to be aligned with the Great Pyramid’s upper chambers, which were believed to have been placed inside the pyramid to ‘relieve’ pressure on the King’s Chamber located below.

We still don’t know what exactly lies inside the mysterious void.

Who would have thought that the Great Pyramid of Giza knows how to fight back?

Long before modern history, this ancient structure was broken into.

And while experts argue that most of its treasures, as well as the pharaoh’s mummy,  may have been looted in the distant past, experts have found that whoever built the Great Pyramid of Giza made sure to include a series of ‘defensive’ structures inside it.

It was a ‘primitive’ anti-theft system.

The mechanism was described by archaeologist Mark Lehner in a series of documentaries by Channel 4. However, experts knew about the defense mechanism since the 19th century. Back then, experts identified the mechanism as a series of grooves.

Eventually, after decades of studying the groves, experts had learned that they were not placed there for decorative reasons.

They had a purpose.

The defense mechanism was primitive but certainly sophisticated for that time.

According to Lehner and other Egyptologists, the builders of the pyramid implemented a defense system consisting of thick granite blocks that were used to block access to the chamber.

These groves located inside the pyramid are believed t to have been used in ancient times to direct the slabs of granite towards the entrance and maintain them in a vertical position.

The builders also placed a second block of even thicker stones that are believed to have been used to slide down the passageway, eventually completely blocking entrance from possible intruders.

Electromagnetism and the pyramid

What could possibly connect the Great Pyramid of Giza and forms of electromagnetism?

Not much, apparently, if of course, you asked experts some 5 to ten years ago.

However, in 2018, scientists from ITMO University and the Laser Zentrum Hannover found that the ancient monument is able to concentrate energy inside its inner rooms, as well as beneath the base.

The study describing this sensational discovered was published in the Journal of Applied Physics.