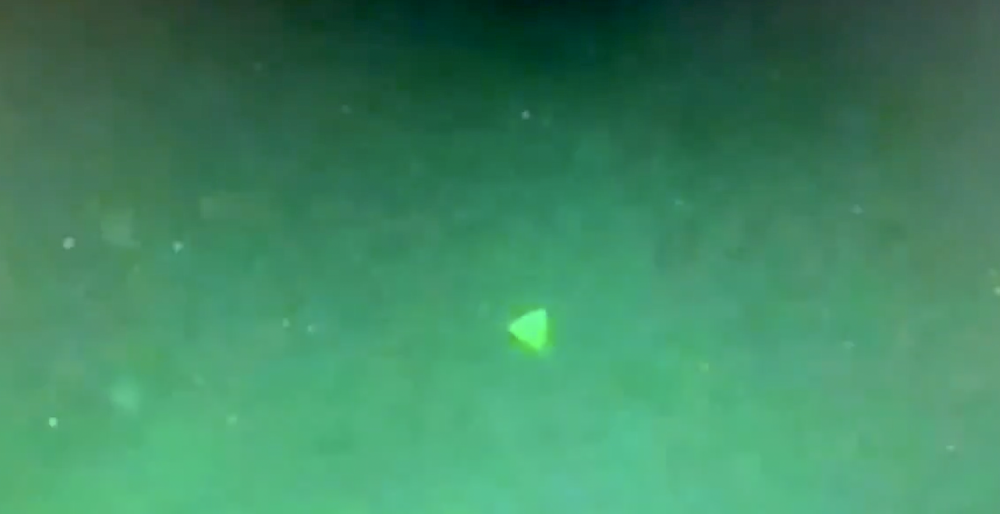 The leaked UFO footage allegedly shows an unidentified flying object "harassing" a US Navy Ship. The video is authentic, a Pentagon spokeswoman confirmed.

A leaked video that shows what appears to be a pyramid-shaped UFO harassing a US Navy Destroyer has been confirmed as authentic, a Pentagon spokesperson revealed.

For the last couple of years, the internet has been overwhelmed by reports, declassified documents, images, and videos of Unidentified Flying Objects. Finally, it seems that after decades of being considered a subject unworthy of serious study, the UFO phenomenon has attracted the attention of not only scientists but different branches of the military across the globe.

Are we really being visited by vehicles, not from this Earth? Or are UFOs no more than top-secret technologies produced by shadow agencies operating within the government?

We don’t know, at least not officially, but the sheer amount of shared data in the last few years is a clear indicator that something is going on.

No longer are UFOs a tinfoil-hat subject that people laugh at. No longer is the idea of UFOs—expressly objects not from our planet—a conspiracy.

In fact, now more than ever, people consider the possibility we have been visited by beings not from Earth in the past, and we are continuously being monitored. I firmly believe this is the case.

Take, for example, ‘Oumuamua and the number of articles, studies, and papers that have been published since the curious object was discovered back in 2017. Fast forward a few years—to 2021—and you’ll see how the chair of Astronomy of Harvard offers compelling evidence for why ‘Oumuamua is an artificial object, one likely “crafted” by an advanced alien civilization from somewhere within our galaxy.

Could you imagine ten years ago that the chair of astronomy spoke out loud about the possibility of aliens visiting our solar system? Neither can I.

I’ve written about alien life, UFOs, and the possibility of ancient alien civilization plenty of times. I’ve seen some of the best UFO footage out there throughout the years but have also seen perfectly faked footage.

Regrettably, fake UFO videos are popular among netizens, which significantly hampers our subject study. Moreover, the rise of phony footage throughout the years has inevitably led to people categorizing and generalizing the UFO phenomenon as a conspiracy.

This, however, is not the case, and the leaked video in this article is evidence that the UFO phenomenon is anything but a conspiracy.

We have reported in the past various incidents involving the US Navy and Unidentified Flying Objects. One of the latest articles we published concerns a report of UFOs hovering above US Navy Destroyers. But the evidence was scarce.

The leaked footage was presented by Jeremy Corbell and showed UFOs harassing the Us Navy. But what is perhaps most surprising of all, the footage was confirmed true by the Pentagon:

“I can confirm that the photos and videos referred to were taken by Navy personnel,” Defense Department spokeswoman Sue Gough revealed to Futurism.com.

Corbell uploaded the footage to his Twitter account, and as of writing, it has been viewed more than 230,000 times, and the footage has already made it around the world.

The footage, which lasts 18 seconds, was filmed with some night vision equipment and showed UFOs triangle-shaped UFOs floating above the deck of a Navy destroyer.

In an interview with Mystery Wire about the UFO footage, Corbell said that the footage had been taken “on deployment from the USS Russell.” The footage was filmed in July 2019, which means it shows just one of the many objects that harassed US Navy destroyers.

“It shows what they described as vehicles. And they made a great distinction. They made sure in this classified briefing; they made a great distinction that this is not something that we own either a black project, this is not something of a foreign military, that these were behaving in ways that we did not expect. And that they were, you know, shaped non aerodynamically. Like pyramids, these are flying pyramids!” Corbell explained.

It has been confirmed that the revelatory UFO video does indeed belong to the UAP Task Force’s inquiry.

Speaking to Futurism, Gogh further revealed that “the UAPTF has included these incidents in their ongoing examinations.”

The sole fact that the video has been confirmed as authentic does not necessarily mean this is the ultimate evidence that UFOs—otherworldly UFOs—are real. We could be looking at some secret drones, spy planes, or something made here on Earth.

Nevertheless, I believe the video is a game-changer in UFOs’ study and confirms that the military has been in contact with these objects longer than we have ever imagined.