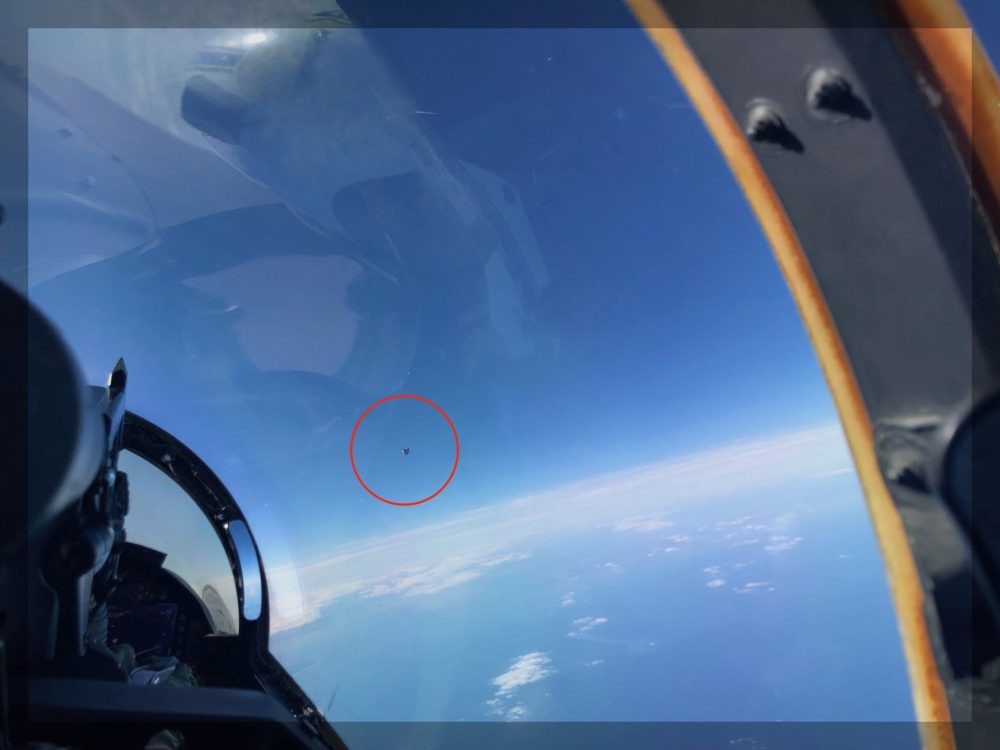 The photograph snapped by a US Navy Pilot is said to be considered "Unclassified and For Official Use Only."

The truth is out there. Like never before, our society has been flooded by the UFO phenomenon which has turned from being tagged as no more than a conspiracy, to a subject worthy of the most rigorous scientific study.

The last couple of years have been exciting for UFO Hunters across the globe. Dozens of previously classified documents have made their way to the general public, numerous videos have been officially declassified showing alleged UFOs, and now images have been made available that back up the theory that there’s more to UFO’s than previously thought.

All of a sudden, and perhaps unsurprisingly, UFOs are no longer deemed the subject of tinfoil hat speak.

As it has been revealed by the Debrief, two classified Pentagon UFO reports have been revealed, the contents of which include a leaked photo showing a mysterious object hovering over the Atlantic, filmed by a United States Navy Pilot.

According to recent reports, the Defense Department’s Unidentified Aerial Phenomena Special Corps (UAPTF) issued the classified “two-position reports” in 2018 and the summer of this year, widely circulating in the US intelligence community, according to reports published in The Debrief based on interviews with multiple sources.

The surprising content of the reports includes a leaked photo that has never been made public before, accounts of unidentified aerial phenomena (UAPs) emerging from the ocean and soaring through the sky, and an official admission that the extraterrestrial origin of some of the These objects cannot be discarded.

“These revelations are extraordinary and give the public a genuine look behind the curtain and how the US government is handling the UFO problem,” Nick Pope, who researched UFOs for the Ministry, told DailyMail. Defense of the United Kingdom. “What this new information does is confirm that the government is taking the phenomenon more seriously than ever. And I anticipate more revelations shortly.”

What strikes me the most is how much the idea of Unidentified Flying Objects has changed in no more than a few years. Go back ten years and talk about UFOs would probably get you a nice conspiracy tag. Because back then, a decade ago, UFOs were apparently no more than the figment of the imagination of UFO hunters. Fast forward to 2018, and the UFO talk changes completely to the point that it has become a subject that is worthy of scientific study.

In addition to the plethora of declassified documents related to the UFO phenomena, various—mind-boggling videos—more evidence is making its way to the general public.

BREAKING: @Debriefmedia has learned of the leak of an unclassified photo, said to have been widely distributed in the Intelligence Community, which purportedly shows what the DoD has characterized as “Unidentified Aerial Phenomena.”https://t.co/z9iBnrtRAb

A leaked photo, published by The Debrief on Thursday, was included in the above-mentioned Pentagon 2018 report, two members of the Department of Defense (DoD) and an intelligence source told the outlet. It was captured off the east coast of the United States by a United States Navy Pilot.

Experts were initially puzzled by the photo but later noted that the object resembled a GPS probe, an atmospheric profiling device designed to be launched from an airplane, typically over a hurricane. Although this may be the case, the object in the photo does not have the GPS transponder hanging from it, as such objects normally do.

Dropsondes are an expendable meteorological reconnaissance device created by the National Center for Atmospheric Research, designed to be dropped from an airplane at a specific altitude above the water to measure storm conditions as the device falls to the surface. That is, it does not float in the air and falls after it is released from the airplane.

Terry Hock, In-situ Sensing Facility (ISF) Manager at the National Center for Atmospheric Research’s Earth Observing Laboratory explained to the Debrief that ” while the image of the object is not clear, it certainly does not look like a dropsonde.”

“There are no signs of a dropsonde below the object where the object could potentially be a parachute, and it does not have the right shape,” Hock added.

What the object photographed by the Navy pilot is remains a mystery, but one possibility is that we are looking at a mylar balloon, and according to the Debrief, Hock agrees.

“There are scientific research groups that do launch balloons which they refer to as drifters. This may be a possibility,” Hock revealed.