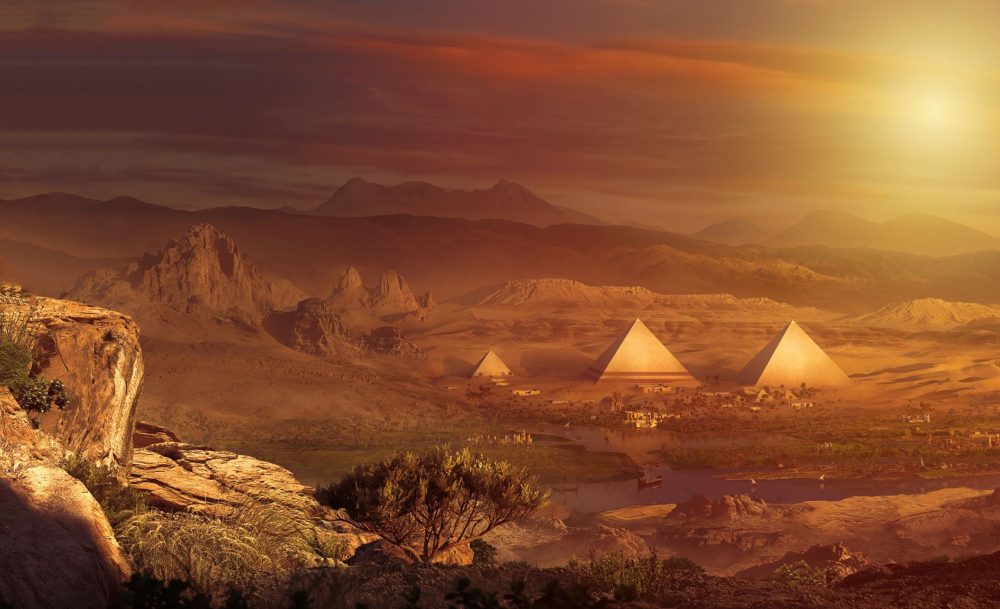 Here's your chance to see through a 3D Video what the pyramids and the Sphinx probably looked like thousands of years ago when they were completed.

When thinking about the Great Pyramid, the Sphinx, and the temples at the Giza plateau, an image of deteriorated monuments bearing the weight of several millennia comes to mind. The constructions we see today have survived thousands of years of erosion.

However, although their shine may have long disappeared, the ancient structures bear evidence of a time when great civilization walked the Earth. The Pyramids at Giza and the Sphinx were very different in the distant past. Vivid, bright, full of life are just a few words by which we can describe the pyramids and the Sphinx when they were just completed.

When they were finished is, of course, a different subject.

Giza; A trip to the past

Mainstream scholars believe that the Great Pyramid of Giza is the oldest pyramid on the Giza plateau. Despite not being the oldest in Egypt, the Pyramid is the most magnificent of all other pyramids built in Egypt throughout the course of several generations. With a total weight estimated at around 6.,5 million tons, Giza’s Great Pyramid is a marvel of ancient engineering. Estimated to have been built in a period of no more than twenty years, its builders are thought to have made use of more than 5.5 million tons of limestone, 8,000 tons of granite (imported from Aswan), and 500,000 tons of mortar.

It remained the tallest structure on the planet’s surface for more than 3,800 years after it was completed, only surpassed by the 160-meter-tall (520 ft) spire of the Lincoln Cathedral in c.1300. It is estimated that to build the pyramid, the builders transported more than 2.3 million books of stone. Most of them originated from quarries located relatively nearby. Some of the stones came from the quarries at Tura, just across the Nile River. However, many stones came from distant quarries located more than 800 kilometers away to the south, the quarries of Aswan.

When the pyramid’s inner core was finished, the structure was surfaced with white blocks of highly polished white limestone. Regrettably, these are gone nearly entirely. A massive Earthquake in 1302AD loosed the other casing stones, and many of them were later carried away and reused in the constitution of mosques and fortresses in and around Cairo. Muhammad Ali Pasha took many other stones of the Great Pyramid in the early 19th century to construct the upper portions of the Alabaster Mosque in Cairo.

How were the Pyramids built?

As for the construction process used to build the pyramids, we are left with more questions than answers. Experts have proposed various, often contradictory theories regarding the pyramid’s construction techniques throughout the years. Despite having studied any analyzed Egyptian pyramids for decades, experts disagree on whether the massive stone blocks were lifted, dragged, or rolled into place. Curiously, there are no written records dating back to when the Great Pyramid of Giza was built, which means that we can’t possibly know how the ancient Egyptians did it. Curiously, this lack of records is widespread among all Egyptian pyramids.

Even Egypt’s oldest pyramid—the Step Pyramid at Saqqara—thought to have been built by the Third Dynasty King Djoser, lacks any records. This is even stranger, as the Step Pyramid of Djoser was an extremely revolutionary structure that changed Egyptian architecture course like no other structure before it.

Djoser’s pyramid is thought to have been designed, planned, and built by a young architect called Imhotep, a man who essentially introduced a colossal stone building to Egypt. The Step Pyramid, its temple, and mind-boggling subterranean world stretching 5.7 kilometers in length are considered the earliest large-scale cut stone construction in Egypt’s history.

The Step Pyramid of Djoser is believed to have kick-started Egyptian pyramidomania more than 4,700 years ago, and the Pyramid of Djoser is seen as an evolution of Egyptian mastabas. However, it draws ideas from various precedents. The most relevant of which is thought to be a mastaba cataloged as structure 3038, built more than 4,700 years ago at Saqqara. the builders of this mastaba worked out a substructure in a rectangular pit and built mudbrick walls rising six meters in height. Three of the mastabas’ sides were extended, forming eight shallow tests rising at an angle of 49 Degrees. Had the builders not left one of the sides uncovered, the Mastaba 3038 would have been an elongated step pyramid.

Djoser’s pyramid complex was revolutionary, and various Third Dynasty Kings after Djoser tried replicating his ancient wonder. However, all Pharaohs until Sneferu of the Fourth Dynasty failed in doing so. It wasn’t several generations after Djoser that Egypt would have another pyramid. During the Fourth Dynasty reign of King Sneferu, Egypt saw three new pyramids’ birth and saw their complexity and size evolve to never-before-seen proportions.

This was nearly achieved at the Bent Pyramid at Dahshur, but the builders most likely got the pyramid’s inclination wrong as the pyramid appeared too steep. The monument rises from the desert at a 54-degree inclination. Still, at around its top section, just below fifty meters, the builders opted for a much shallower angle of 43 degrees giving the pyramid its obvious and notorious Bent shape.

The Red Pyramid was a game-changer. It is regarded as the first successful attempt at building a smooth-sided pyramid. The Red Pyramid—also known as the North Pyramid—is Egypt’s third-largest pyramid in history (of Egypt) and remained the largest such until the Great Pyramid of Giza was built (according to the mainstream history of Egypt) by Sneferu’s son King Khufu, some 4,500 years ago.

In other words, the pyramids built by Sneferu greatly impacted the evolution of Pyramid building techniques in Egypt and directly contributed to the design, planning, and construction of later pyramids in Egypt.

After the Great Pyramid, all pyramids that followed were lesser in design, size, and alignments. Nonetheless, Khafre’s pyramid is regarded as Giza’s second Jewell, right after the Great Pyramid. Khafre’s pyramid is thought to have been built around 2,570 BC. It was the second-tallest pyramid and the second-largest of the ancient Egyptian pyramids at Giza.

Khafre is also attributed to commissioning the Sphinx, the largest and oldest known monumental sculpture in Egypt. Just as the pyramids lack texts of how, why, and when these were built, we have no written records of the time the Sphinx was carved directly from the bedrock of the plateau, which is also thought to have served as the quarry for the pyramids and other monuments in the area.

Although we don’t really know what the Sphinx looked like when it was completed, and we don’t know its original purpose, scholars can try to envision what the state may have looked like thousands of years ago.

This is precisely what some researchers like Harvard Egyptologist Peter Der Manuelian did in the below videos, as he guides the viewed through a 3D model of not only the Giza pyramids and their temples, but the Great Sphinx as well.