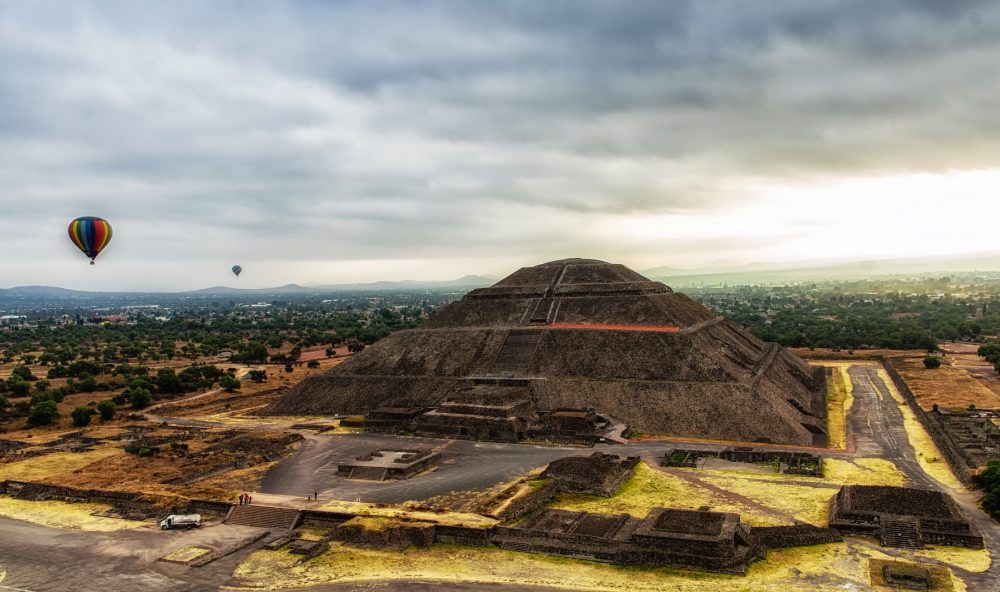 Mesoamerica (a historical region extending from approximately central Mexico through Belize, Guatemala, El Salvador, Honduras, and Nicaragua) is home to some of the largest most enigmatic pyramids ever built on the surface of the planet.

Of all the ancient pyramids the world has seen, none are as beautiful and awe-striking as those built in Egypt. The three pyramids at Giza–which some say were constructed in correlation with the constellation of Orion–are the most visited ancient sites on the surface of the planet.

However, despite their world-renowned fame, these majestic ancient structures are not the largest nor oldest on the surface of the Earth. Even though the Great Pyramid of Giza was built–according to mainstream Egyptologists–around 4,500 years ago, the oldest pyramid in Egypt predates the Great Pyramid by several hundred years.

The Step Pyramid of Djoser at Saqqara is believed to be the oldest pyramid of ancient Egypt, thought to have been built around 2,780 BC. A few generations of Kings would pass until Egypt saw another pyramid built. It wasn’t until the Fourth Dynasty reign that another successful pyramid was erected in Egypt.

This was the Pyramid at Meidum, built by Fourth Dynasty Pharaoh Sneferu. He is regarded as the greatest, most prolific pyramid builder in the history of Egypt, building three pyramids: One at Meidum and two at Dahshur: the Bent Pyramid and the Red Pyramid.

The latter is regarded as the first successful smooth-sided pyramid in Egypt and the monument that laid down the foundation for the construction of the Great Pyramid of Giza.

But even though the Step Pyramid of Djoser at Saqqara is regarded as the oldest pyramid in Egypt, one that changed ancient Egyptian architecture forever, it isn’t the oldest on Earth.

The Brazilian pyramids, although lesser in terms of masonry and design, are considered the oldest such structures on the surface of the planet. Located on the Atlantic Coast of Southern Brazil are pyramids that were built for reasons we have yet to understand fully.

Like the Pyramids of Egypt and Central America, the South American pyramids were probably built for religious purposes. As a result, some of them contain burials of sacrificed victims and grave goods that include stone plaques, shell plates, stone futures, and fossils of animals. Nonetheless, these were not tombs.

Although the functions of the Brazilian pyramids and those of Egypt were similar to some extent, researchers say that the cultures never came into contact with each other in ancient times and that the pyramid-building era developed independently in both geographical areas.

According to archaeological studies, the Brazilian pyramids date back to around 3,000 BC, which means that the Egyptian monuments predate the Step Pyramid of Djoser by several hundred years.

One attribute that both the Brazilian and Egyptian pyramids share is that both were built in various phases. The Step Pyramid of Djoser, for example, is thought to have been built in as many as six different stages, and the Brazilian pyramids were too possibly even over several decades or centuries.

Because the Brazilian pyramids were built with lesser construction materials, archeologists have failed to identify many of them in the past. Since they are made of seashells mostly, experts had confused the ancient pyramids for immense piles of rubbish from nearby settlements.

Little did know researchers that beneath those massive piles of “rubbish” overgrown and conquered by nature lay the remnants of the oldest pyramids on the Earth.

The Brazilian pyramids are the very core of pyramid-building that developed across–eventually–the entire continent.

The pyramids, some of which are believed to be more than 5,000 years old, have become a kind of “endangered” monument. Researchers say that fewer than 1’0 percent survive in various states of preservations.

Regrettably, during the ’60s and ’70s, the pyramids were used as a source of raw material for road construction.

Nonetheless, some of the greatest Brazilian pyramids survive. One of the largest is located near the town of Jaguaruna in the Brazilian state of Santa Catatina.

It covers around 25 acres and stands 100 feet tall. In the past, the pyramid is thought to have been much taller, and experts estimate that it may have risen more than 180ft into the air.

The Brazilian pyramids are evidence that some 5,000 years ago, there were ancient civilizations inhabiting Brazil that were far more sophisticated than experts were willing to admit and were capable of creating genuinely monumental structures.

However, in Central America, present-day Mexico (and Guatemala), we find some of the most mind-boggling pyramids ever built in Mesoamerica.

The first, most impressive pyramid of Mesoamerica is also the largest pyramid and largest artificial monument built anywhere on the planet. According to the Guinness Book of World Records, there isn’t a more enormous pyramid anywhere.

The Great Pyramid of Cholula, located not far from present-day Mexico City, is a pyramid that has a total volume of 4.45 million cubic meters. The pyramid remains buried mainly beneath a mountain, atop which the Spanish built a church that remains standing to this day.

Called Tlachihualtepetl (Nahuatl for “made-by-hand mountain”), it is even larger than the Great Pyramid of Giza, which has an estimated total volume of approximately 2.5 million cubic meters.

Although experts have never found any written accounts detailing the exact date the pyramid was built, nor are there any ancient texts telling us how it was done, researchers estimate that the first layers of the Pyramid of Cholula were placed perhaps as early as the 3rd century BC.

The pyramid is so massive that archeologists assume it was built in four distinct stages. The final form of the pyramid is composed of six superimposed structures, similar, although much smaller when compared to the Step Pyramid of Djoser in Egypt.

It is estimated that each structure or step of the pyramid was built by the cultural group that dominated the city at a given time.

Of the six superimposed structures, only three have been studied by experts.

In addition to the gigantic pyramid mountain, the complex features an intricate network of underground tunnels leading to unexplored areas beneath the enormous pyramid.

Not far from Cholula are the ruins of another great pyramid city: Teotihuacan.

Here, an ancient civilization that is long lost to history built a massive, imposing metropolis with incredible pyramids at a time prior to the Nahuatl-speaking Aztecs.

Today, as Teotihuacan has come to be known, the city of gods is widely acknowledged as one of the most architecturally significant Mesoamerican cities ever built.

Several thousands of years ago, Teotihuacan is thought to have been one of the most populated cities on the planet’s surface and the most populous in the pre-Colombian Americas. Scholars estimate that Teotihuacan was home to anywhere between 150,000 to 250,000 people.

Not only that, but its inhabitants were also people from different cultures, and some are thought to have moved to Teotihuacan from regions as far away as Guatemala.

Such was the city’s size that it is acknowledged as the sixth-largest city in the world during its time.

But Teotihuacan wouldn’t be a city worthy of gods without pyramids, would it?

Luckily, thousands of years ago, the ancient culture that founded Teotihuacan also built some of the most impressive pyramids of Central America.

The city’s largest pyramid is one of the largest ever built in the region, rising into the air at the height of around 65.5 meters. When it was completed, it had a kind of temple on its summit, which is now missing. With its temple, the pyramid stood around 75 meters in height.

Just as Djoser’s Step Pyramid and the Great Pyramid of Cholula, the Pyramid of the Sun was also most likely built in numerous phases and restorations.

The pyramid of the Moon at Teotihuacan is interesting because experts believe the pyramid was built on top of another much older pyramid, which is perhaps even older than the Pyramid of the Sun. This pyramid features seven distinct layers that were stacked one atop the other.

The Pyramid of the Moon is thought to have been completed in several hundred years, with some experts suggesting it took the ancient cultures around 350 years to complete.

Like many other pyramids, the temple of Quetzalcoatl also has underground tunnels running beneath the pyramid.

To the south of Teotihuacan and Cholula, deep within Maya territory, are the remnants of an ancient city home to another supermassive pyramid.

In present-day Guatemala, in the ancient city of El Mirador, we find more than just a long-lost history. El Mirador is home to around 35 triadic monuments consisting of massive artificial platforms topped with a set of three summit pyramids.

The most notable structures at El Mirador are nicknamed el Tigre, which measures around 55 meters in height, and La Danta. The latter is a true ancient wonder.

Measuring 72 meters in height, the pyramid of La Danta has an approximate total volume of 2,800,000 cubic meters; as such, it is regarded as one of the largest pyramids on the surface of the planet. However, la Danta is unique from other pyramids because it sits upon a massive artificial platform, covering around 180,000 square meters.

If this is included in the calculations, then La Danta is by far one of the most massive ancient structures anywhere in the world.

The La Danta complex consists of three superimposed levels, which result in a pyramidal concept on which several groups of buildings are located.

It has become one of the most emblematic architectural constructions of El Mirador due to its monumentality and constructive opulence, and, therefore, has generated great scientific interest among society in general. The massive construction represents a challenge both for research and for conservation.

Without a doubt, the pyramid complex of La Danta–which is hidden beneath a dense forest that surrounds it–is one of the most enigmatic structures ever built by human hands in the history of humankind.