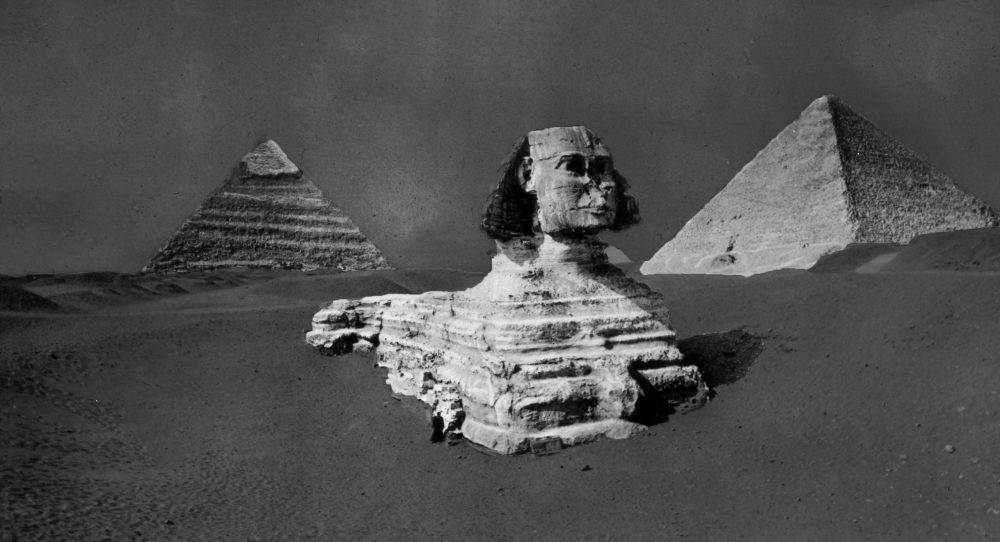 "...there is not one single contemporary inscription which connects the Sphinx with Khafre; so, sound as it may appear, we must treat the evidence as circumstantial, until such time as a lucky turn of the spade of the excavator will reveal to the world a definite reference to the erection of the Sphinx."

Carved with a lion’s body and presumably, the head of an ancient Egyptian King, the Great Sphinx of Giza, measures seventy-three meters in length and is twenty meters tall.

Even though there are no written records from when the Sphinx was carved, the ancient Egyptian moment is considered the oldest known monumental sculpture in Egypt.

According to mainstream Egyptologists, the Sphinx’s origins can be traced back to the pyramid building fourth Dynasty, specifically the reign of King Khafre, the man who is said to have commissioned the construction of the second-largest Giza pyramid, son of King Khufu.

Even though there are no written documents that date back to the fourth dynasty and mention the Sphinx, mainstream experts argue that it was designed, sculpted, and constructed by the Egyptians of the Old Kingdom after constructing the pyramid of Khufu.

Egyptologists believe that, once the pyramid of Khafre was finished, there was a massive body of limestone between the pyramid and the temple. The builders were left with two options; either remove the entire limestone formation or re-use it. Experts believe that the later one was chosen, which shows how the Great Sphinx came into existence.

Therefore, if this theory put forth by Egyptologists is correct, then the Great Sphinx is a kind of “accidental” and unplanned monument.

I don’t subscribe to this there for various reasons. Most importantly, because the Egyptian civilization was so far ahead of their time in terms of architecture, engineering, design, and planning, they surely would not have left anything unplanned or done accidentally.

I also happen to disagree with the carving date set forth by Egyptologists, mostly because of a lack of evidence.

Despite this lack of evidence, Egyptologists firmly believe that it was Khafre who commissioned it. Nonetheless, it is impossible to identify several things when speaking about the Sphinx; we have absolutely no idea what its “creators” called it since there are no written accounts of the Sphinx dating back from the Fourth Dynasty reign Khafre.

In fact, the Great Sphinx does not appear in any known inscriptions of the Old Kingdom, and there are no inscriptions whatsoever that describe its origin, purpose, or age.

Isn’t that in itself contradictory? There are no other “Great Sphinxes” anywhere else in Egypt. The Great Sphinx is the largest of its kind. It is also the most imposing one, and there are no written records of the time it was supposedly built.

Some thousand years later, and after the Sphinx was buried, explored, and buried by the sands of Egypt, the people of the New Kingdom worshiped the monument calling it Hor-em-akhet, a solar deity whose name translates into “Horus of the Horizon.”

This is also controversial, in my opinion. Why?

Because had the ancient Egyptians ever had references to the Sphinx when it was carved, they would have stuck with that name. Take, for example, the Great Pyramid of Giza.

It is believed to have been called Akhet Khufu Khufu’s Horizon. To this day, we know that Khufu’s Horizon is a name used to refer to the Great Pyramid. (Whether this is correct and accurate is something I won’t discuss in this article).

So, we have Akhet Khufu, a name that supposedly dates back to the pyramid’s time, around 2,580 BC. This pyramid predates the Sphinx.

But the Sphinx’s name is nowhere to be found.

The name we have for the monument today–Sphinx–was given to the statue in classical antiquity, more than 2,000 years after the monument was supposedly carved from the bedrock.

If the Sphinx was built in the Fourth Dynasty as some Egyptologists suggest, then why is it that its original name is nowhere to be found? The name of the Great Sphinx evolved throughout history. Medieval Arab writers referred to the statue as “The Terrifying One.”

One of the main pieces of evidence why experts re convinced that the Sphinx pertains to Khafre is a small diorite statue of the Fourth Dynasty Kind that was discovered in the debris of the Valley Temple next to the Sphinx.

But for all we know, this statue could have ended up among the debris of the temple at any given time in history.

One of my favorite explanations on the mystery surrounding the sphinx comes from two excellent Egyptologists, Miroslav Verner and Salim Hassan. The latter excavated and studied the Sphinx in 1949 made a detailed description of his discovery.

Hassan wrote, summing up the problem of dating the Sphinx in the following paragraph:

Miroslav Verner sums up just how mysterious the Great Sphinx is, and how little we know about it in the following paragraph;

The Great Sphinx of Giza is more than simply a symbol of ancient and modern Egypt. It is the very embodiment of antiquity and mystery itself. Over the centuries it has fired the imaginations of poets and scientists, adventurers and travelers. Although it has often been measured, described, investigated using the most up-to-date scientific-technical means, and discussed at special scientific conferences, fundamental questions remain unanswered: Who built it, when, and why? (p.234)

The Sphinx’s exact age. We have absolutely no idea when exactly the Great Sphinx was carved. Since there are no written documents that read, “the Sphinx was built in the year of…” we can only assume, or make an “educated” guess when the statue was carved.

Its original name. Just as we don’t know when the Sphinx was carved, we don’t really know what the people who carved the monument called it when it was completed. We call it the Sphinx, but that just a relatively “modern” name given to the statue thousands of years after it was carved.

Its purpose. Was the Great Sphinx just a massive statue and the result of a massive piece of bedrock that disturbed the view of Khafre’s pyramid from the Nile river? Was it really carved randomly?

Or is there another, a greater mystery to the Sphinx? There are cavities and rooms beneath the Sphinx, and there are even rooms that are said to exist inside it. What is its purpose?

Were these cavities carved by gold diggers and treasure hunters? Or did they exist from the time the Sphinx was carved? This, it would seem, is a secret the Sphinx holds to itself.

Is it Khafre’s face? One of the greatest mysteries of the Sphinx is who its face is meant to represent. Egyptologists are convinced that it was Khare’s face, even though we can’t possibly know what Khafre’s face looked like.

There aren’t many examples of Khafre’s face we can use to compare it to the face on the Sphinx. In other words, it is just an academic guess that it’s Khafre’s face and that the Sphinx was carved for the Fourth Dynasty King.

As proposed by Graham Hancock and Robert Bauval, the Sphinx’s geographic relation, the pyramids, and the Nile river directly correspond to the constellation of Leo, Orion, and the Milky Way.