The Sumerian King List is one of the most fascinating, chronological documents from Ancient Mesopotamia.

According to what was written down on the Sumerian King List, eight ancient rulers were kings over ancient Mesopotamia and ruled for a period of 241,200 years, before the Great Flood swept across the planet.

The Sumerian King list tells an amazing ancient tale that many scholars have found too hard to believe. 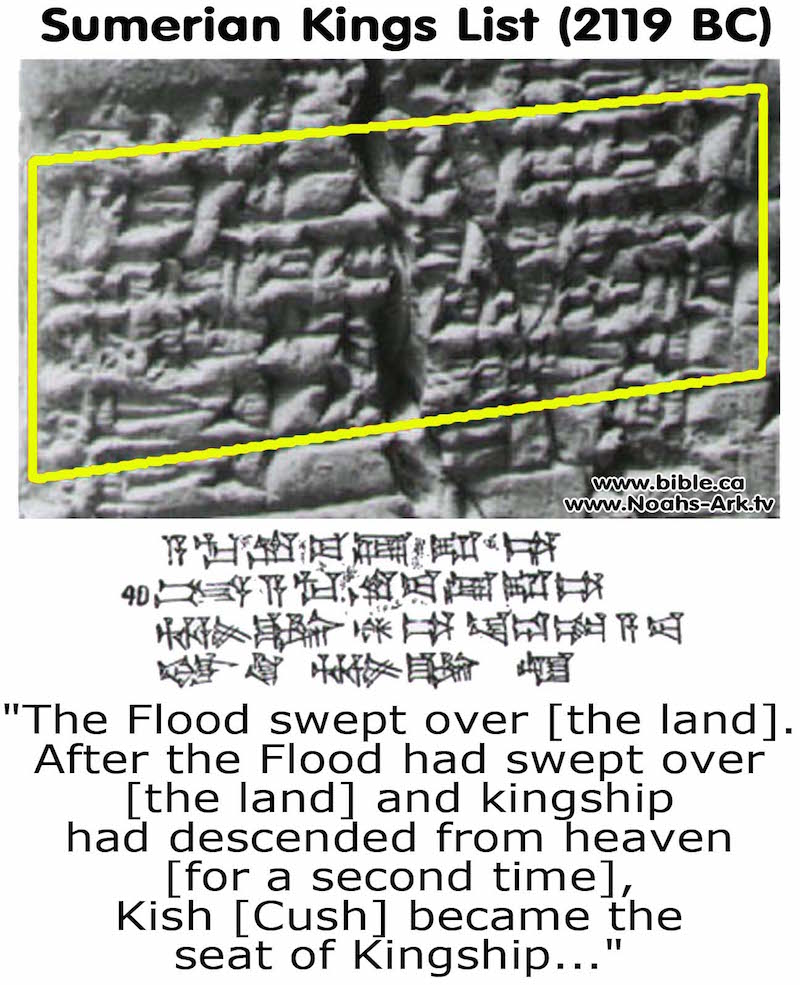 Throughout the years, different scholars have been finding copies of what is now considered one single manuscript written thousands of years ago in ancient Mesopotamia; the Sumerian King List.

The very first fragment of the list a 4,000-year-old cuneiform tablet was discovered in the early 1900s by German-American scholar Hermann Hilprecht at an archeological site in the ancient city of Nippur. Since then, archaeologists have found more than 18 copies from different sites in ancient Mesopotamia.

And while not one of the lists is the same, they clearly are derived from the same historical source.

This ancient text indicates how thousands of years ago, the world as we know it was ruled by eight mysterious kings for a staggering period of 241,200 years.

A Kingship from Heaven

But not only that, the list strange indicates that those rulers were not originally from Earth;

“…After the kingship descended from heaven, the kingship was in Eridug. In Eridug, Alulim became king; he ruled for 28800 years. Alaljar ruled for 36000 years. 2 kings; they ruled for 64800 years…”

“…In 5 cities 8 kings; they ruled for 241,200 years. Then the flood swept over…” that is written on the first part of the Sumerian King List.

So did these guys really became kings after kingship was transferred from the heaven? And did they actually live for more than 241,000 years?

Not really, say experts. In fact, the answer given to us by experts is that the Sumerian King List is in fact a mixture of prehistorical and ‘mythological dynastic rulers,’ with implausible lengthy reigns and more plausibly historical dynasties.

This means that scholars argue that some parts of the King ist are factual and correct, while other details, such as the implausibly lengthy reigns— just can’t be.

The fascinating accounts of the Sumerian king list are even more exciting as we realize some of the details are heavily related to Genesis.

The incredible lengths regions on the Sumerian King List have caused confusion among experts.

Curiously, after the Great Flood, the Sumerian Ling List tells us that the lengthy reigns of kings were greatly reduced. It also seems to reflect a similar, if not identical pattern, of decreasing longevity as found in Genesis.

Most scholars agree that the incredible lengthy reigns are artificial, and their length unworthy of consideration.

As noted by R.K. Harrison, “While the antediluvian section of the Sumerian King List has usually been regarded as important for establishing a chronology of early Sumerian kings, their amazingly long tenure of regal office has provoked many attempts at interpretation.”

“At one extreme was the desire to dismiss the astronomically large figures as “completely artificial on the grounds that such a position could hardly be denied even by the most superficial examination. Some other investigators, influenced by the mythological interpretation of Biblical and other ancient Near Eastern writings, relegated the numbers frankly to legend and folklore and regarded them as unworthy of serious consideration.”

10 Things You Should Know About the Toro Muerto Petroglyphs

There’s An Extraordinarily Strange Theory of “Immortals” Circulating the Internet