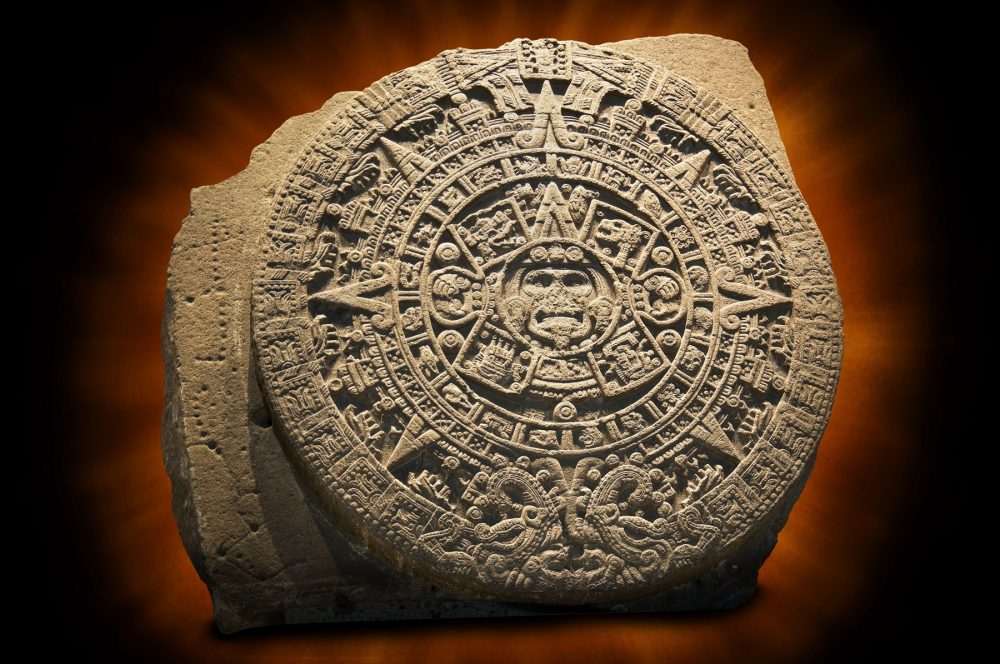 The ancient Aztec Sun Stone is one of the most fascinating Aztec pieces recovered to date.

Although the Aztec Sun Stone (Piedra del Sol) is commonly known as a calendar for keeping a count of the time according to the Mexica conception, the use of the monolith weighing more than 24 tons remains a profound mystery, even though several theories try and explain its purpose.

The Aztec sun stone is perhaps one of Mexico’s most famous monoliths, and it dates back to the time of the Aztec Empire, just before the Conquest of Mexico. Although the exact date of when the stone was carved remains a mystery, experts usually believe it was carved between 1500 and 1520, which means that it was probably carved at the end of the so-called Mesoamerican Postclassic Period.

Elements carved on the surface of the sun stone give off details that help understand its origin. Researchers have identified the name of Moctezuma II in the central disk; this would place the stone being carved between 1502–1520 AD. The massive piece was rediscovered when Mexico City’s Cathedral was being repaired during the 1790s. When the Aztecs carved it, the sun stone was likely an important piece of the monumental complex of the Templo Mayor.

But other than that, there’s not much on the sun stone that can help reveals its authorship or even purpose. Furthermore, just because the stone actually mentions Moctezuma II doesn’t necessarily mean he commissioned it, nor does it mean it was necessarily carved during his reign.

Nonetheless, and even though there are no documents that actually tell when or why it was charged, Mexican researchers did find specific—albeit weak—references to the “crafting” of a “huge stone block.”

A massive monolith and its transportation

If the Sun Ston is one thing, then it certainly is huge. It’s massive, to be honest. Its total weight is 24,590 kg (54,210 lb), and it measures 3.58 meters in diameter and is nearly one meter thick. The monolith is one of the best examples of ancient art and technical capabilities of ancient civilizations in Mexico and is perhaps even more famous than the legendary Olmec heads.

Geological analysis of the stone has revealed essential data that can help pinpoint where the Mexica extracted the stone. Geologist Ezequiel Ordoñez determined more than 100 years ago that the ancient Aztecs likely quarried the massive stone block—which weighed more than 25 tons—from the Xitle volcano. The stone is olivine basalt, something determined by Ordonez in 1893.

How the stone was transported to where it was found remains a profound mystery. With the stone weighing more than 25 tons, it is more than likely that a major labor force was needed to move the gigantic piece.

Archaeologists suggest that after the stone was quarried, it was dragged to the location where it was then carved. Given its massive weight, this probably means that the stone was transported with thousands of people’s help. But the Mexica didn’t move the stone a few hundred meters. 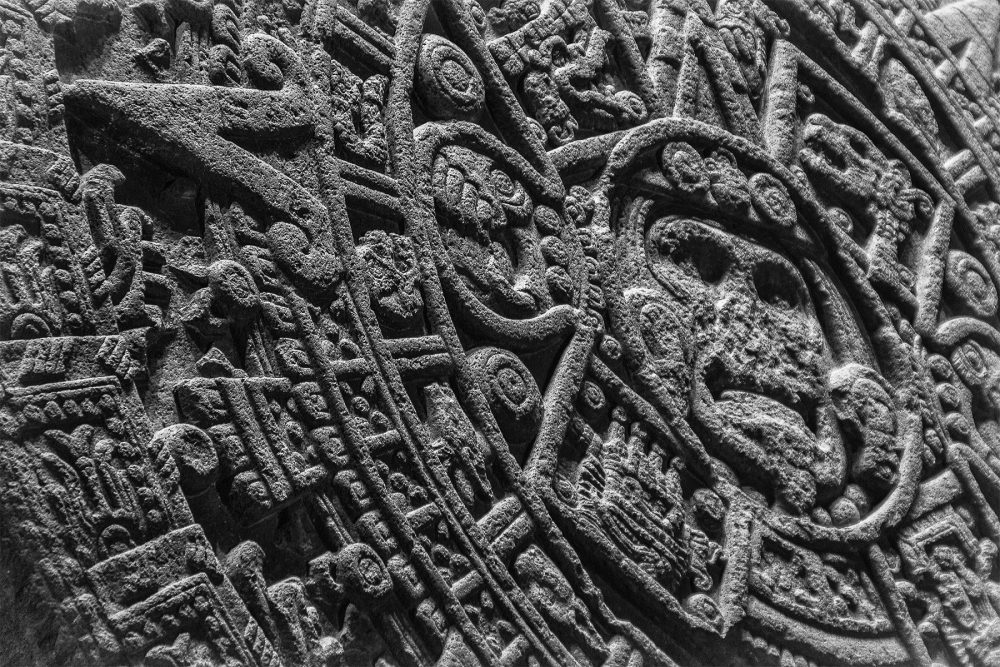 If the quarry location is accurate, it means that the sun stone was transported across a distance of more than 20 kilometers. Interestingly, although ancient civilizations in North America, like the Maya, did know the wheel, the technology was not used for transport, which is rather odd. Traces of the wheel in the New World, specifically Mexico, can be found in present-day Veracruz, where researchers discovered a toy with wheels. Nonetheless, its use in transportation in the New World has not been proven.

This means that the sun stone was either dragged by thousands of people across a vast distance or the Aztec employed a technique we’ve still not discovered to date that allowed them to move pretty large payloads in ancient times across enormous distances.

Its size speaks of its importance. There aren’t many similarly sized stones that were so intricately and carefully carved (Nonetheless, there are other sun stones). This tells us that whoever commissioned the stone to be carved thought it was of great importance and likely carried a message that we have yet not fully understood. Despite us not having fully understood it, certain elements have been identified by experts throughout the years. For example, its central components are believed to indicate a reference to the Mexica cosmogeny or their explanation for creating the universe.

The monolith is believed to refer to four previous phases of existence or eras. The central disk is believed to depict the solar deity Tonatiuh. However, several experts have proposed, throughout the years, that the central deity may be Yohualtecuhtli, a hybrid deity, and Lord of the Night, or even the earth monster Tlaltecuhtl.  Four squares were carved surrounding the central deity, and these are believed to refer to the four previous eras, all of which predate the present.

Curiously, each era is believed to reference the destruction of the world, humanity, and illustrate the beginning of a new world, the next era. The eras depicted on the sun stone are 4 Movement, the present era, 4 Jaguar, 4 Wind, 4 Rain, and 4 Water.

The eras illustrated on the sun stone have actual reference to time. Experts believe that they refer to the Aztec centuries, with 52 years being one century. The above eras and the years they lasted have one thing in common; all of them are multiples of 52.

Although this may associate one with a calendar, it is far from being one. The sun stone was crafted in a way that although it uses calendrical glyphs, it refers to a cycle or, better said, various cycles that illustrate a concept of time and its relationship with Aztec cosmogeny.

5 things you should know about the Sun stone