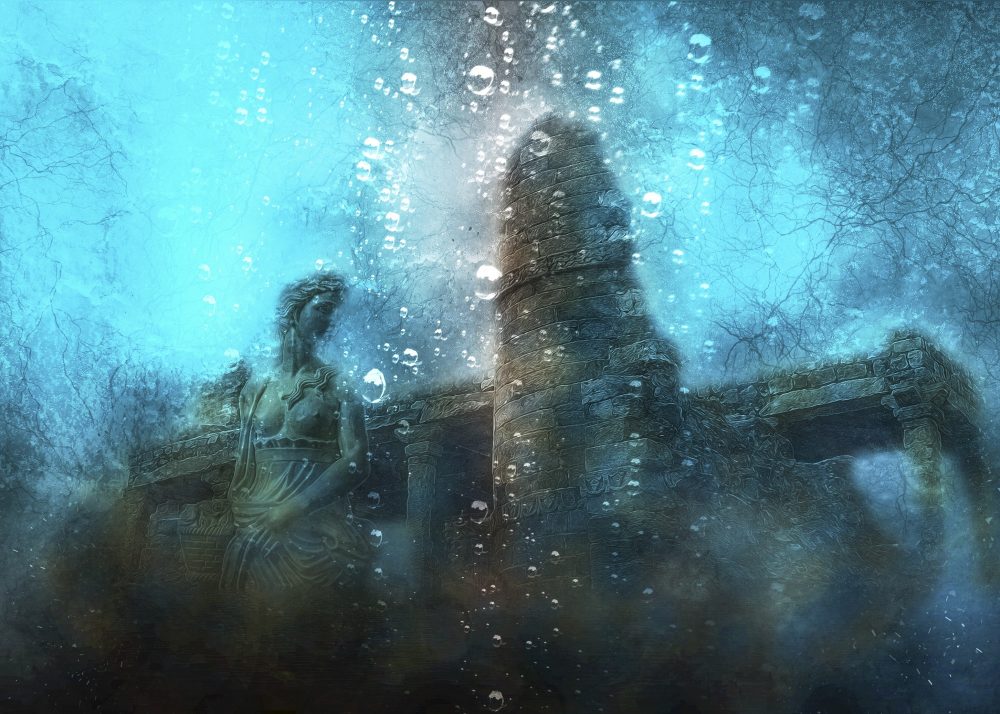 Mentioned in numerous ancient Hindu texts, the city of Dwarka was thought to have been no more than a myth. That is until the 1990's, when its remnants were found off the shore of India.

Throughout history, countless ancient cities were built across the globe. Some of these cities were so impressive that poems were recited in their honor, and some of them were so majestic that people thought gods built them; Teotihuacan in present-day Mexico is just one such example.

Other cities, such as Atlantis, were said to have been home to extremely advanced civilizations that mysteriously vanished from the historical record. But Atlantis is just one of the many examples; an ancient city called Dwarka is another fine example, and you probably never heard of it.

That’s why I adore mythology.

But sometimes, myths are not far from facts.

One such example is a legendary lost city, said to have existed somewhere in present-day India. The City of Dwarka is said to have been built by a heavenly deity, and its existence is attested in one of the holiest ancient Hindu texts, the Mahabharata.

Dwarka is the place where myths are fused with reality, becoming one. It is where we find out that what was once a myth can easily turn into reality.

Mentioned in the Mahabharata

Legends say that Krishna, one of the most powerful deities mentioned in the Mahabharata, founded Dwarka. The Mahabharata tells us that Dwarka was the capital of the Amnarta Kingdom. In Hindu epics and the Puranas, Dwarka is called Dvaravati and is one of seven Tirtha (pilgrimage) sites for spiritual liberation.

In essence, Dwarka is considered the Hindu Atlantis; it was a powerful, prosperous city eventually devoured by the ocean. The powerful City was built on an island not far from the present-day shore of India.

In the Mausala Parva of the Mahabaratha, the submergence of Dwarka is witnessed by Arjuna–a protagonist in the Mahabharata– who describes the catastrophic event as follows:

The sea, which had been beating against the shores, suddenly broke the boundary that was imposed on it by nature. The sea rushed into the city. It coursed through the streets of the beautiful city. The sea covered up everything in the city. I saw the beautiful buildings becoming submerged one by one. In a matter of a few moments it was all over. The sea had now become as placid as a lake. There was no trace of the city. Dwarka was just a name; just a memory.— Mausala Parva of Mahabharata.

In addition to the above, ancient Dwarka is mentioned in the Shrimad Bhagavad Gita, the Harivamsha, the Skanda Purana, and the Vishnu Purana.

Legends mention Dwarka as the closest thing to Atlantis after Plato: It was extremely well protected, and one could only reach it by boat. Moreover, it was well planned; the City is said to have been divided into six distinct sectors, each of which served a particular purpose. One sector was built solely for the City residents, another sector was built for commercial purposes, and another one for temples.

The Golden Palaces of Dwarka

Home to magnificent wide roads and well-decorated plazas, the City was home to many artificial lakes and gardens. But, most importantly, Dwarka was home to as many as eight hundred palaces, which are said to have been crafted out of silver, gold, and precious stones.

Once a legend, now a reality

Until the 1990s, the City was thought to have existed only in legends.

However, based on these legends, in the nineties, archaeologist Ranganatha Rao carried out investigations off the coast of the present City of Dwarka (the gold of Khambhat / Cambay) and found the remains of structures, ancient anchors, and ancient vessels of an ancient culture, dating back to the third millennium BC.

Until the discovery made by Rao, Dwarka was considered no more than a mythological place because although the City is mentioned in the main sacred texts of Hinduism, no evidence has ever been found to prove its existence.

The importance of this site for Hinduism is underlined by the fact that Dwarka, whose name derives from the Urdu word ‘dwar‘ (gate), is one of the four sacred pilgrimage points that exist.

A few kilometers from the place where the remains of the submerged City have been found, a small town was founded, also named Dwarka, which today is a coastal city with about 30,000 inhabitants and a multitude of temples.

According to Hindu sacred texts, Dwarka was buried by the ocean as many as six times, a victim of tidal waves and typhoons, but divine favor made it always resurface and remain the home to Lord Krishna. Today, laziness and mistrust are reburying archaeological remains whose importance is beyond doubt. The government has not spent enough resources to document the sunken city, nor has it done enough to protect its remains, dating back several thousand years.

Ancient Hindu texts also tell us that the City was attacked on numerous occasions and was even the place where a powerful “aerial battle” involving “Vimanas” took place;

“Lord Krsna struck Salva with sixteen arrows, and with showers of arrows He overpowered the airplane, just as the sun in a clear sky overpowers the whole sky by an unlimited number of molecules of sunshine…” (Source)

The importance of the sunken City resides in the fact that, according to experts, it predates the oldest known archeological remains in the content by around 5,000 years. Furthermore, it is even older than the ancient Harappan civilization, dating back to around 4,000 years.