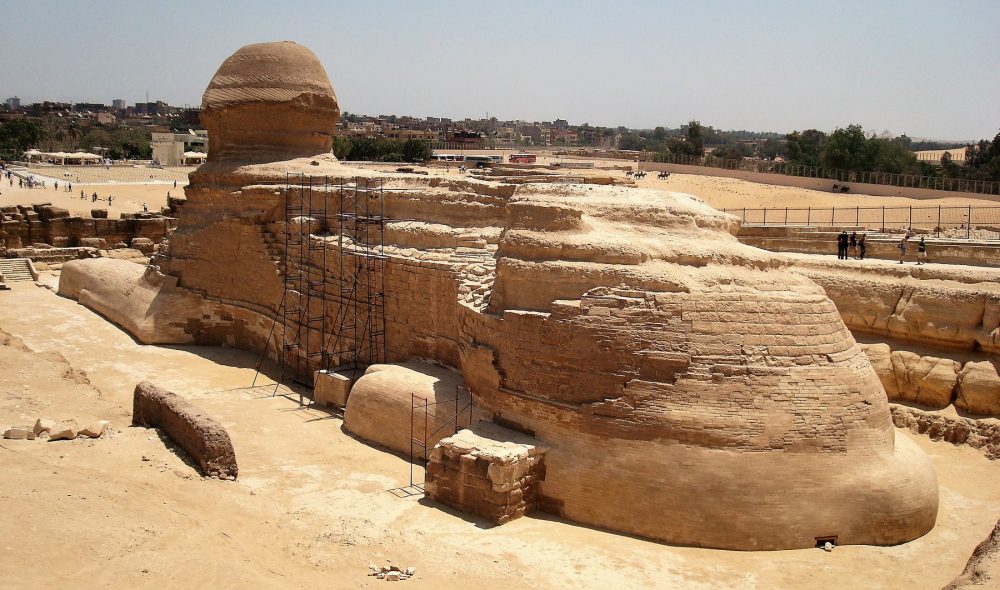 After surveying and excavating the sphinx from 1925 to 1936 Emile Baraize discovered a tunnel starting at the rump of the Sphinx which he explored before the entry was censured.

After surveying and excavating the sphinx from 1925 to 1936 Emile Baraize discovered a tunnel starting at the rump of the Sphinx which he explored before the entry was censured.

The Great Sphinx of Giza was the first truly colossal piece of sculpture ever carved in ancient Egypt.

The imposing statue composed of the body of a lion and the head of a man remained a unique wonder throughout thousands of years of history. In fact, a statue of such proportions would not be carved again until the Pharaohs of the New Kingdom, when Amenhotep II and Ramesses II carved megalithic statues around 1,200 years later.

Impressive as it is, the Great Sphinx safeguards the history of ancient Egypt, and there are some who have dared say that the massive sculpture knows about a time long before the Egyptians, suggesting it was there long before the first Pharaoh unified upper and lower Egypt. But we don’t know much about it.

In fact, there is very little that can be confirmed about its origin. Since there are no known inscriptions in ancient Egypt mentioning or describing the Sphinx, we can’t possibly identify its origin, purpose, and original name. It is a massive engine fueling mystery, and not one scholar can accurately explain why there are no inscriptions anywhere describing its construction or original purpose.

We only know that the name Sphinx was given to the statue thousands of years after it was initially carved, referencing to an ancient Greek mythological beast that had the body of a lion.

It is precisely this aura of mystery which surrounds the Sphinx that has given rise to numerous theories, stories, myths, and conspiracies.

Although not the oldest Sphinx in the world, the ancient Egyptian Sphinx is a unique wonder of the world. The earliest such statue was discovered around 195 kilometers (120 mi) to the east at Körtik Tepe, Turkey, and was dated to 9,500 B.C, meaning that around 11,500 years ago, people were already familiar with the shape of the Sphinx.

But the Sphinx at Giza is the most famous statue of them all.

Carved from the natural bedrock not far from the three main pyramids at Giza, the Great Sphinx stands guard to the three colossal pyramids behind it.

Facing directly from West to East, the Great Sphinx of Giza measures seventy-three meters from pat to tail. The statue is twenty meters high, and nineteen meters wide at its rear haunches.

This mysterious statue is so old that already to the ancient Egyptians the figure was old. Its exact age is a mystery. However, it is commonly accepted that the statue was carved by ancient Egyptians of the Old Kingdom, precisely during the reign of Pharaoh Khafre, between 2558–2532 BC.

Although no physical evidence exists pointing to Khafre as its builder, Egyptologists believe Khafre’s face was carved on the Sphinx, and that the massive monolithic statue is no older than Khafre.

But many scholars tend to disagree with this idea, and some have even suggested we can trace the Sphinx’s origins back to the end of the last ice age.

Symbol of the Sphinx

The great Sphinx symbolizes power; it symbolizes rebirth and eternity. But the Great Sphinx, in the form of a lion, was also a solar symbol which many ancient cultures around the globe would eventually adopt. This symbol is not unique to ancient Egypt. Historians argue that the Sphinx was also a common archetype of royalty.

In Egypt, for example, the human head carved on the body of a lion would symbolize power and might, all of which was controlled by the higher intelligence of the ruler, the Pharaoh who was identified as the guardian of cosmic order, or as the ancient Egyptian would call it; maat.

The maat refers to the ancient Egyptian concepts of truth, balance, order, harmony, law, morality, and justice. This was also something personified within a Pharaoh but also represented within the Sphinx. In other words, the Sphinx acted as a guardian of a kind of cosmic knowledge in ancient Egypt.

To the ancient Egyptians, the statue of the Sphinx was not just a piece of stone carved in the landscape. It was real, it was alive, and it stood there inspiring fear, but also hope since the Sun with which the Sphinx was identified symbolized rebirth and a new beginning.

The fact that the Sphinx was revered as a solar divinity is confirmed by its New Kingdom name: Hor-em-akhet. Evidence of that is Pharaoh Thutmose IV, who refers explicitly to the Sphinx as the Hor-em-akhet in the Dream Stele.

Egyptologist Miroslav Verner gives us a fascinating description of the Sphinx:

We don’t know its name. We don’t know its purpose; we don’t know anything about it. Everything we do know regarding the sphinx can be traced back to not-so-distant antiquity when ancient texts already mention a deteriorated, ancient statue.

The Great Sphinx defines mystery in history like no other statue. The massive body of the Sphinx, imposing as it is despite its many marks and damages, seems to have belonged to a statue with a totally different head. The considerably large lion body does not fit with the smaller-sized head the Sphinx has today.

It’s as if in the distant past, the Sphinx’s head depicted something entirely different.

But according to mainstream scholars, the answer as to why the head of the Sphinx is so small can be found in the geology where the Sphinx stands. The size of the Sphinx’s head, which seems totally out of proportion is not a question of the head being recarved overtime or cut to a smaller size.

According to experts, the size of the head is just right. But when the Sphinx was being carved, during the reign of Khafre, its builders were faced with a massive problem: cracks and fissures began to develop on the body of the Sphinx. In order to save the statue and still create the sPhinx despite the geological defects, the builders of the Sphinx opted to elongate the body, in order to compensate for the issues they were faced with.

Hence, the builders created the sphinx with a larger body, while the head was carved to a much smaller size.

The Sphinx is so old that restoration on the massive statues began some three-and-a-half millennia ago. Ever since restoration work has continued in order to preserve the Sphinx for time to come.

In recent times, major restoration on the Sphinx took place from 1926 to 1988. French engineer Emile Baraize studied and restored the sphinx for 11 years. Unfortunately, his 11-year work was never published, and many different phases of the Sphinx’s architecture and its surrounding s were never properly documented.

But not everything was lost. It is well known that from 1925 to 1936 Baraize was involved in the restoration of the Sphinx which included thoroughly clearing away the sand around the statue, and directed excavations around it and inside it, in search of hidden rooms, chambers and tunnels which many 19th century Egyptologists believed lay within or below it.

These excavations were hurried and were carried out with minimal equipment, but they did partially succeed in their objectives, for Baraize discovered a tunnel starting at the rump of the Sphinx which he explored before the entry was censured.

Thutmose’s stela, dating to the first year of his reign around 1401 BC has also contributed to our understanding of the Sphinx. It depicts the imposing statue couchant upon a high pedestal with a door at the bottom. This door is what has led many authors, and adventurers to suggest there are actually chambers and tunnels located beneath the Sphinx.

Egyptologists, on the other hand, say that the door is most likely simply an artistic motif.

A collaboration with Ain Shams University and SRI of California had discovered in 1977 several anomalies at the Sphinx: Researchers discovered a cavity or shaft in front of the Sphinx’s forepaws. Resistivity survey conducted by the SRI, as well as acoustical sounding testing.

The scientific study Scientists from Waseda University revealed that on the body of the Sphinx, there is a groove similar to that on the southern part, which seems to extend underneath the body. Under the Sphinx, therefore, there may be a tunnel. Further, near the front elbow, a geometrical cavity (1m x 1.5m x 7m) has been detected, possibly containing metal or granite.

Furthermore, north of the statue, they discovered similar groves which are indicative of possible tunnels that lead beneath the Giza monuments.

After surveying and excavating the sphinx from 1925 to 1936 Baraize discovered a tunnel starting at the rump of the Sphinx which he explored before the entry was censured. Since his work was lost, there are no written accounts of what the French engineer found.