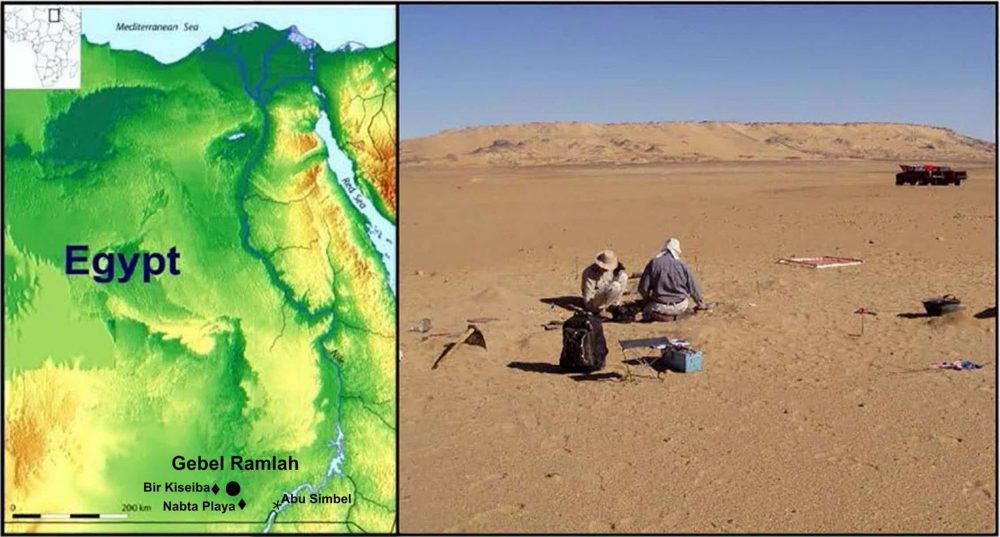 The Pre-Pharaonic Civilization built megaliths, intricate shrines as well as calendar circles that resemble mini-Stonehenges. "...several behavioral indicators, combined with the technological and ceremonial architecture, such as calendar circles and sanctuaries, imply a level of sophistication that goes well beyond that shown by groups of herders..."

Archaeologists have excavated six ancient sites dating back to a time of pre-Pharaonic times in Egypt. The discoveries have allowed us to understand better the enigmatic Neolithic culture of the people who lived in the Nile plain before the ancient Egyptians and eventually lay down the foundations for the development of ancient Egyptian civilization and their imposing temples and pyramids.

It is usually acknowledged that the ancient Egyptian Dynastic period begins around 3100 B.C. Before that, between 9300 and 4000 B.C., the Nile plain was inhabited by Neolithic peoples.

These villages have not been well studied, at least in relation to their successors, mainly because archaeological sites are often poorly accessible. The remains of their settlements are located mainly under the old Nile flood plain or in peripheral deserts, making their study a complicated thing.

However, members of the Combined Prehistoric Expedition, with permission from the Supreme Council of Antiquities of Egypt (SCA), studied the Neolithic sites of Egypt’s western desert. Although not lush, the Neolithic was wetter than today, which allowed the former herdsmen to populate what is now the middle of nowhere.

The archaeologists are excavating sites along the former shores of an extinct seasonal lake near Gebel Ramlah.

During the last part of the Neolithic period, the ancient settlers began to bury the dead in cemeteries, and the skeletons provide critical information about their lifestyle. According to experts, this pre-Pharaonic civilization even built megaliths, intricate shires, and calendar circles that resemble mini-Stonehenges.

To understand about the mysterious civilization “thought to have eventually given rise to the ancient Egyptians, we turn back to archeological expeditions that took place between 2001 and 2003 when members of the expedition excavated three cemeteries of this era with 68 skeletons.

These people were tall, enjoyed a long life, and showed low rates of infant mortality. The men measured about 170 cm, while the women, about 160 cm. Most men and women lived for more than 40 years, some up to 50 years, an advanced age for those days.

But more recent expeditions have revealed even further clues about the enigmatic peoples.

Archeological expeditions, which took place between 2009 and 2016, found two cemeteries that were very different from the rest. The researchers analyzed another 130 skeletons discovering that few artifacts accompanied them and suffered from increased infant mortality and a shorter life and stature.

Why were there so many differences between the two burials?

They could have been separate populations, but it is unlikely based on general physical similarities.

Therefore, they might differ by status, with one cemetery for the elite and one for the workers. This is the first proof of such a phenomenon in Egypt.

Further studies revealed important clues about the family structures of the time.

As noted by the Conversation, “The overall sex ratio across all cemeteries is three women to each man, which may indicate polygamy. the total number of burials and a lack of reference to individual houses suggests these were extended family cemeteries.”

The archeologists also discovered that attainment of “personhood” – the age children are socialized into being “people” – was three years.

There is also clear evidence of respect for the dead.

These behavioral indicators, combined with the technological and ceremonial architecture, such as calendar circles and sanctuaries, imply a level of sophistication beyond that shown by groups of herders. Taken together, the findings provide a glimpse of things yet to come in Ancient Egypt.

Excavating sites near Gebel Ramlah provide direct and unprecedented insight into people’s lives that gave rise to the ancient Egyptians.

Similar insight was obtained by archeologists in 2018 when the researchers discovered the remnants of a 7,000-year-old settlement in Egypt.

Archeological excavations of the Neolithic village in Tell el-Samara, located around 140 kilometers (87 miles) north of Cairo, revealed the very foundations of an ancient settlement that predates the Egyptian pyramids by at least 2,500 years. The village helped experts understand more about Predynastic Egyptians and their way of life, the gods they worshiped, and their culture.

Ancient Egypt’s first ruler from First Dynasty, which lasted from around 3150 to 2890 BC, was Narmer, the same person usually identified as Menes, the king that unified Upper and Lower Egypt. Although not much is known about Namer, he is believed to have been the successor to the Protodynastic king Ka, or even possibly the so-called Scorpion King.