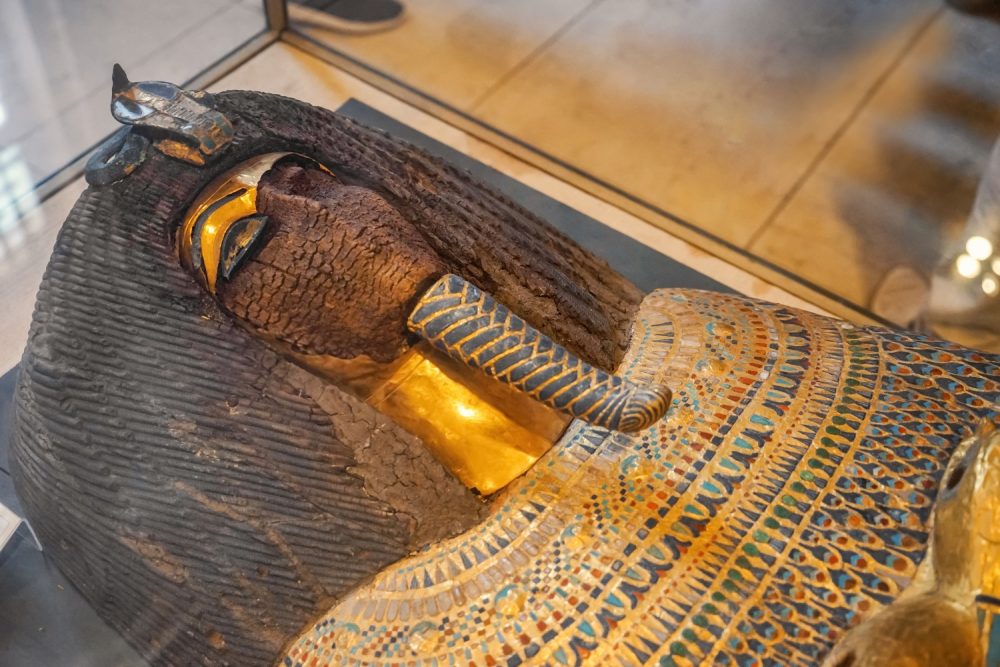 Beneath its golden sands, Egypt holds many ancient secrets.

The Land of the Pharaohs is beyond fascinating.  Filled with ancient history, myths, legends, and incredible structure dating to a time before history was recorded, the lands that were once ruled by the ancient Egyptian civilization have it all.

As we have explored Egypt, we have come to understand that we look upon one of the most advanced and sophisticated civilizations of ancient times.

Ancient Egypt may long be gone, but archeologists continue finding and digging up its ancient treasures.

From the Great Pyramid of Giza, the Sphinx, to long-lost sunken cities, here we have some of Egypt’s greatest archeological discoveries that have left experts awestruck.

Discovered at the footsteps of the Great Pyramid of Giza, in 1954,  Kamal el-Mallakh came across an ancient ship, buried in the sand. It had remained there undisturbed since it was sealed into an ancient pit, carved from the Giza bedrock.

The boat was sealed into the pit around 2,500 BC. Now located in the Giza Solar boat museum, Khufu’s ship is one of the oldest, largest, and best-preserved ships from ancient Egypt.

Described as a masterpiece of ancient woodcraft and shipbuilding, the ship has been identified as the oldest intact ship ever discovered on the planet.

Perhaps one of the most fascinating megaliths discovered in Egypt, the unfinished obelisk at Aswan, is the largest known obelisks on the planet, located in the stone quarry of Aswan.

Believed to have been commissioned by Hatshepsut, the fifth pharaoh of the Eighteenth Dynasty of Egypt, the obelisk was most likely ordered to complement what would later be known as the Lateran Obelisk at the temple of Amun in Karnak.

The unfinished obelisk is so large that scholars argue it is one-third larger than any other ancient Egyptian obelisk ever erected.

Dubbed by many as the greatest discovery in the history of archeology, in 1922, archaeologist Howard Carter discovered Pharaoh Tutankhamon’s tomb.

The tomb is famous for the plethora of wealthy artifacts it housed.

“At first, I could see nothing,” Carter wrote while describing how he entered the tomb.

“…the hot air escaping from the chamber causing the candle flame to flicker, but presently, as my eyes grew accustomed to the light, details of the room within emerged slowly from the mist, strange animals, statues, and gold — everywhere the glint of gold.”

The Tomb of Pharaoh Seti I

Arguably one of the best-decorated tombs in the valley of the Kings, the Tomb of Pharaoh Seti I is also known as the “the Tomb of Apis” and “the Tomb of Psammis, son of Nechois.”

Archaeologist Giovanni Battista Belzoni discovered the tomb on 16 October 1817. Considered the longest tomb in the Kings’ valley at 137.19 meters long, it features intricately decorated chambers. Of its eleven chambers, only two remain undecorated.

The chambers are not opened to visits due to water damage.

Yes, you read it right. There’s a tomb called TT320 that’s known as the Secret Mummy Cave. Located in the Theban Necropolis, the tomb contains the eternal resting place of the High Priest of Amun Pinedjem II and his family. Pinedjem II acted as Amun’s High Priest from 990 BC to 969 BC and was essentially the ruler of the south of the country.

The cave contains an extraordinary collection of mummified remains and funeral equipment of more than 50 kings, queens, and members of the New Kingdom’s royalty.

The Valley of the ancient Egyptian Golden Mummies

Discovered in 1996 by former Minister of State for Antiquities Affairs Zahi Hawass and his team, the valley of the Golden Mummies is a massive burial site located in the Western Desert of Egypt, near the Nahariya Oasis.

Initial excavation revealed that the tomb contained nearly two hundred and fifty mummies believed to be more than 2,000 years old.

Follow up excavations revealed that there are more than ten thousand mummies inside it.

The idea that the Great Pyramid of Giza, and for that matter, other pyramids scattered across the globe, served in ancient times as a tomb has been heavily debated among experts.

While most researchers argue the Great Pyramid of Giza was built as the eternal resting place of Pharaoh Khufu, there haven’t been many discoveries that suggest so.

The pyramid lacks the beautiful hieroglyphs we see in other ancient Egyptian tombs. Its burial chamber is empty, and there isn’t really evidence there ever was a mummy inside it.

A study published by scientists from ITMO University (Russia) and the Laser Zentrum Hannover (Germany) suggests the pyramid may have been a much more sophisticated structure than we’ve ever imagined.

Deir el-Medina, the Town of the Tomb builders

Called in ancient times, Set Maat, which means “The Place of Truth,” Deri el-Medina, as it is called today, is the ancient village that was home to the people who worked on the tombs in the Valley of the Kings.

The people who lived in the settlement were called “Servants in the Place of Truth.”

Located on the west bank of the Nile river, the excavation of the ancient village revealed an unprecedented account of community life in ancient Egypt that spans for a period of around 500 years.

In fact, the site is of such importance that experts say there isn’t a single comparable site which allowed scholars to study the organization, social interactions, working and living condition of ancient Egypt in such detail.

The site is a UNESCO World Heritage Site.

In 1999, the French archaeologist Franck Goddio came across a forgotten city’s sunken remains lost to the ocean. Dubbed by many as ancient Egypt’s Atlantis, Heracleion was actually an ancient port city in Pharaoing Egypt.

Of great importance to the Kingdom, it was home to a temple where new Pharaohs would receive the divine power of Amun, which legitimized their rule of the lands of Egpyt.

One of the most famous historians of ancient times is, without a single doubt, Greek writer Herodotus.

He wrote a plethora of information about ancient Egypt and described in great detail many things that are not long gone.

One of the things described by Herodotus in his work was a mysterious ship that existed in Egypt some 2,500 years ago.

Since no one ever discovered the remains of the ship, the vessel was considered a myth.

However, with the discovery of the sunken city of Heracleion, many discoveries surfaced.

One of them was precisely the remains of the boat Herodotus had mentioned.