Ancient Egypt is not all about Pyramids, mummies, and secrets hidden beneath the sands.

In fact, the land of the Pharaohs, throughout its extensive history, has given the world a lot of previous artifacts, and some of them are in the form of ancient papyri.

Researchers have revealed that they have identified what is the oldest Christian letter in an ancient Egyptian Papyrus.

An autographed letter dealing with everyday matters is older than all other Christian documentary evidence of Roman Egypt and the entire Christian world of the third century.

Dating back to 230 CE, the letter belongs to the papyrus collection of the University of Basel.

The ancient papyrus provides valuable information about the world of the first Christians in the Roman Empire, not found to be recorded in any other historical source.

As noted by the researchers, the early Christians in the Roman Empire are commonly depicted as eccentrics who withdrew from the world and were tormented with persecution.

This is counteracted by the content of the Basel papyrus letter P.Bas. 2.43.

The letter, however, offers evidence that at the beginning of the third century, Christians lived outside the cities in the interior of Egypt, where they held positions of political leadership and mingled with their pagan environment in their daily lives.

The papyrus P.Bas. 2.43 has been in possession of the University of Basel for over 100 years.

It was written by a man named Arrianus to his brother Paulus.

The papyrus was found to stand out from the plethora of conserved letters dating back to Greco-Roman Egypt thanks to its final greeting formula: after reporting on the family affairs of the day to day and ask for the best fish sauce as a souvenir, the author of the letter uses the last line to express his desire that his brother will prosper “in the Lord.”

According to the researcher, the papyrus author uses the abbreviated form of the Christian phrase “I pray that you farewell in the Lord.”

“The use of this abbreviation – known as a nomen sacrum in this context – leaves no doubt about the Christian beliefs of the letter writer,” explains Sabine Huebner, Professor of Ancient History at the University of Basel.

“It is an exclusively Christian formula that we are familiar with from New Testament manuscripts.”

However, the researchers also note that the name of the brother is also revealing; Huebner goes on to explain:

“Paulus was a scarce name at that time, and we may deduce that the parents mentioned in the letter were Christians and had named their son after the apostle as early as 200 AD.”

The age of the papyrus

And thanks to extensive prosopographic research, the researchers were able to date the papyrus to 230 AD.

This makes the ancient letter at least 40 to 50 years older than all the other Christian documentary letters known throughout the world.

Furthermore, Huebner also reveals that the ancient papyrus provides essential details about the social background of this Christian family: Arrianus and his brother Paulus were young and educated sons of the local elite, landlords, and public officials.

Where it originated from

But not only did Huebner manage to find out its value and its age, but the researcher also managed to discover the ancient papyrus’ origin.

According to the researcher, the ancient papyrus originates from the village of Theadelphia, a settlement located in the center of Egypt. It belongs to the famous Heroninus archive, the largest papyrus archive of Roman times.

The papyrus letter is featured in a new monograph by Huebner called, Papyri and the Social World of the New Testament.

Huebner’s book is addressed to a broad audience. It shows that the papyri of Greco-Roman Egypt can help illustrate the social, political, and economic life of the early Christians completely and fascinatingly. 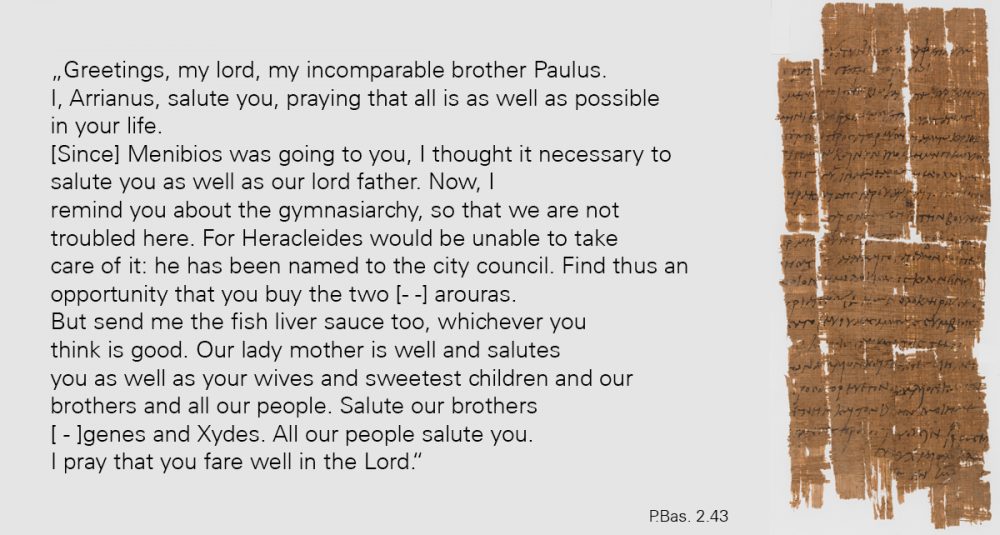