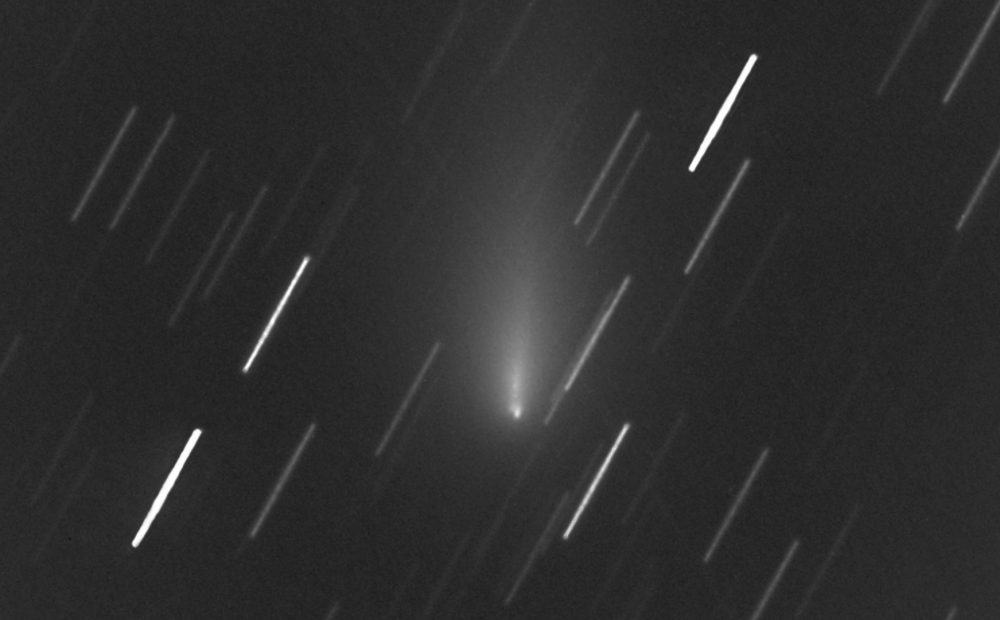 Comet C/2019 Y4 Atlas, whose coma (atmosphere) is approximately 15 arcminutes in diameter, estimated to be five times the size of Jupiter and half the size of the Sun, has broken up into several (at least four) pieces as it makes its way towards the Sun. The last time the comet came anywhere near the Earth, the Egyptian pyramids are thought to have been built.

Comet C/2019 Y4 Atlas, discovered December 28, 2019, on a trajectory approaching the Sun, has disintegrated into several fragments, with evident changes in the brightness distribution. An image snapped on April 12, (57 60-second exposures), taken remotely with a robotic unit from Virtual Telescope Project shows the comet has not survived in one piece as it continues its way towards the inner solar system.

The telescope followed the apparent motion of the comet and the images were stacked using the comet’s orbit to provide the best precision. The image scale is 0.63 arcseconds per pixel.

“In the upper left insert, you can see the central region, this time after applying an unsharp masking filtering: there are surely three, but likely four fragments there,” a statement from the Virtual Telescope read.

Apparently, the westernmost fragment is now the brightest (April 12), when a day before on April 11 it seemed weaker, while the overall aspect of the group changed as for expansion of the components. A comet becomes brighter as it gets closer to the sun because it burns more intensely and releases more frozen volatiles.

With an almost parabolic orbit, its closest approach to the Sun, the perihelion, will take place on May 31, 37.8 million kilometers from our star. If the comet survives its approach towards the sun, comet Atlas will probably be visible from then, (May 21) to a few weeks after that without telescopes.

The comet is predicted to reach a magnitude of -8.2 in its perigee and -11.7 in its perihelion. Keep in mind that the coma extends up to 300,000 kilometers, more than twice the diameter of Jupiter. The comet has a green tail that is produced by the ionization of carbon and cyanide gas inside the comet as it gets closer to the Sun.

C72014 Y4 Atlas has been identified as a hyperbolic comet, which means that its orbit extends deeper into the cosmos, with the Sun acting as a gravitational wave to launch it further from the solar system. The comet has an orbit similar to that of the Great Comet of 1844, leading to speculation whether C / 2019 Y4 is a fragment of the same main body as that of Comet of 1844. The nucleus has already been baked by the sun in its previous encounter.

Although comet Atlas is heading towards the inner solar system and has already passed the orbit of Mars, the comet will pas millions of kilometers away from Earth, so we shouldn’t be worried about it impacting us. Comet Atlas has been hailed as the comet of the century due to its increasing brightness, and skygazers theorize that it could be one of the brightest comets in recent decades.

The comet will most likely outshine Venus in the night sky (if it doesn’t continue to disintegrate) by May 31, 2020.  Its coma and tail are estimated to be around half-the-size of the Sun. The comet’s atmosphere is calculated at around 15 arcminutes in diameter. This means that on the scale of big things in the solar system, Comet ATLAS falls somewhere between the Sun (1,392,000 km diameter) and Jupiter (139,820 km), according to Space Weather Archive.

According to astronomer Lyudmila Koshman of the Moscow Planetarium, the last time Comet Atlas ventured anywhere near our planet was around the time when the Egyptian pyramids were being built, some 4,700 years ago.