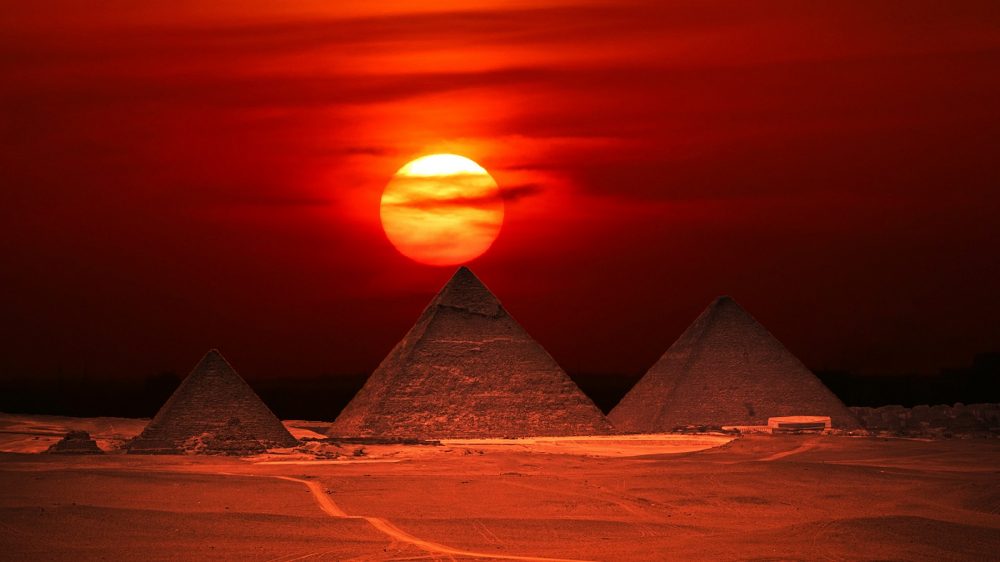 There are about 120 confirmed pyramids in Egypt, but many more could exist buried beneath the sands.

Of all the pyramids globally, the ancient Egyptian pyramids hold a special place in human history. Egypt isn’t home to the largest pyramids and certainly does not have the most pyramids in terms of numbers. But despite this, it is home to pyramids that have boggled the mind of scholars for hundreds of years.

Pyramid construction in Egypt can be traced back to the rule of Pharaoh Djoser during the ancient Egyptian Third Dynasty. During King Djoser’s reign, Saqqara, a royal necropolis, saw the birth of a construction that would forever change the history of ancient Egypt.

Royal architect Imhotep was tasked to build a stone structure, unlike any other previously built in Egypt. Imhotep, a young architect, when Djoser came to the throne of Egypt, did not disappoint. His revolutionary ideas were translated into work, and the Step Pyramid was built around 2,780BC.

The revolutionizing structure, the entire pyramid complex of the Step Pyramid, saw Pharaohs that came to the throne after Djoser, try and replicate the wonderous structure but without immediate success.

In fact, it wasn’t until Sneferu that Egypt would see the birth of a new pyramid. In total, Sneferu constructed three pyramids, of which the Bent Pyramid and the Red Pyramid are the most famous. The Red Pyramid—ancient Egypt’s third-largest pyramid—laid down the foundations for constructing the Great Pyramid of Giza, thought to have been built by Sneferu’s heir to the throne, Pharaoh Khufu.

Eventually, the Great Pyramid would become ancient Egypt’s largest and most awe-striking pyramid. The structure, which is believed to have been built as the royal tomb for Pharaoh Khufu, is a structure containing more than 2.3 million stone blocks, with an average total weight of more than 6.5 million tons.

Khufu, Khafre, and Menkaure—all descendants from Sneferu—would go and build their respective pyramids at Giza.

According to Egyptologists, there are around 120 Pyramids discovered so far in Egypt. In comparison, there are about 200 pyramids in Sudan alone.

But that doesn’t mean that there aren’t any other pyramids waiting to be found. In fact, Egypt surprises us with discoveries every once in a while. Although most of the discoveries are ancient tombs, sarcophagi, and ancient mummies, Egypt has more to offer.

A Pyramid beneath the sand

Finding a pyramid is really a big deal. Most of the history of ancient Egypt lies hidden deep beneath its golden sands. We can’t possibly see what’s beneath it, but technology can help us explore potential sites that have been buried since time immemorial.

Saqqara is believed to have served as the necropolis for ancient Egypt’s Memphis capital and is home to many pyramids, including ancient Egypt’s oldest pyramid, the Step Pyramid of Djoser.

Located around 40 kilometers from the world-famous Giza pyramids, Saqqara may hide more secrets than it has revealed until now.

Archeologist Dr. Vasko Dobrev has been studying the site for more than three decades, and during Channel 5’s documentary “Opening Egypt’s Great Tomb,” he revealed some of his research. More precisely, Dr. Dobrev is hunting for a new pyramid, and details of his work were revealed in the documentary.

The Egyptologist argues that a new Pyramid may lie buried beneath the sand in the area of Saqqara South known today as Tabbet al-Guesh, north-west of the mortuary complex of Pepi I.

“Pyramids here spanned six centuries of Egyptian history, but one dynasty of pharaohs, in particular, chose to build their magnificent tombs in Saqqara,” explained Tony Robinson from Channel 5’s documentary.

Dr. Dobrev explained that numerous undiscovered pyramids could remain buried beneath the sand.

“There are about 120 [pyramids] all around Egypt. Pharaohs built pyramids here because Saqqara is exactly in front of Egypt’s capital, Memphis,” revealed Dr. Dobrev.

The archeologist who has surveyed Saqqara believes that hidden beneath the ground are the foundations of the Pyramid of Pharaoh Userkare, an ancient Egyptian ruler that did not reign for more than three of four years.

Egyptologists argue that Pharaoh Userkare could not finish a 52-meter-high pyramid in three years. “He may have only had time to create the pyramid base. We are on a good height, we discovered that all the pyramids that are in Saqqara, are on the same level,” explained Dr. Dobrev.

But without evidence, this is pure speculation. Luckily, Dr. Dobrev has data to back up his claims. Speaking to Robinson during the documentary, the Egyptologists revealed that beneath the sand is a structure that was most likely not naturally made. It’s a kind of buried square, measuring 80 meters by 80 meters, precisely the dimension of a pyramid spanning back to the period when Userkare reigned.

“So there is a kind of pyramid level, and we have his father to the north, his son is just there, and his grandson is behind us. But we have something else, new technology, geophysics, showing something with right angles,” said Dr. Dobrev.

In addition to Dr. Dobrev, astrophysicist Giulio Magli maintains that the (buried?) pyramid of Userkare is to be found midway between the Pyramids of Pepi I and Merenre Nemtyemsaf I, at a position that would make the three pyramids create a line parallel to the one formed by the pyramids of Sekhemkhet, Unas, Djoser, Userkaf and Teti to the North.