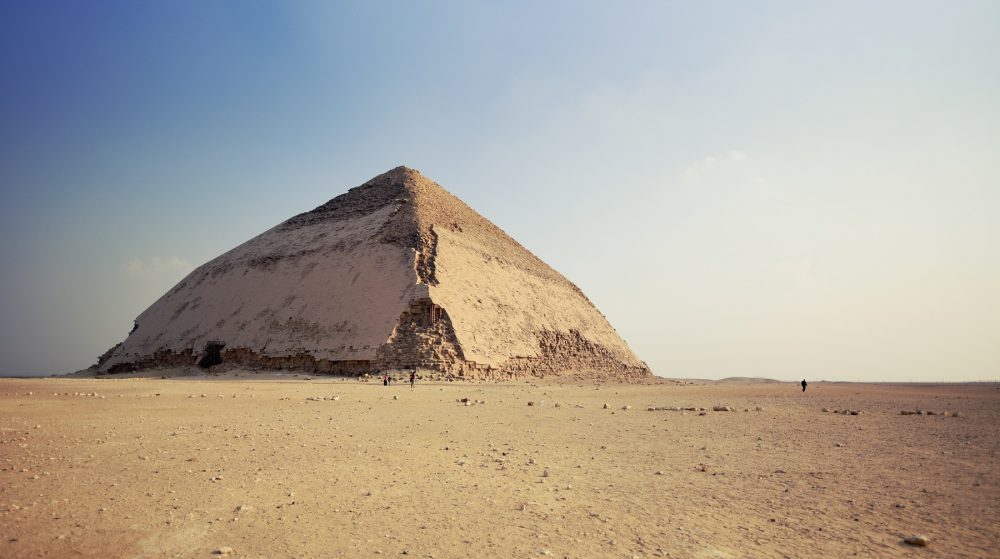 Of around 120 pyramids from ancient Egypt, the Bent Pyramid at Dahshur is the most unique.

Known also as the False or Rhomboidal Pyramid, the Bent Pyramid of Egypt is a masterpiece of ancient Egyptian engineering, one that clearly marks an important time in pyramid building techniques in ancient Egypt.

Thousands of years ago, entirely abruptly and suddenly ancient Egyptian architecture changed. Without clear precedents, the pyramid was born during the third dynasty of ancient Egypt, when the country, united for several generations already, was ruled by a Pharaoh that would later in history be known as Djoser.

The Step Pyramid at Saqqara was the very first pyramid of ancient Egypt. Built around 2,780 BC, the pyramid marked the beginning of a higher level of monument building in Egypt.

Regarded as the earliest colossal stone building in Egypt and the earliest large-scale cut stone construction, the Pyramid commissioned by Djoser was an unprecedented construction process on a previously unseen scale in Egyptian history.

The Pyramid, its pyramid complex, and vast subterranean world spanning around 5.7 kilometers was a project that left a deep imprint in ancient Egyptian history.

Pharaohs that followed after Djoser were beyond impressed and followed their predecessor’s footsteps. Although a few Pharaohs tried mimicking the achievements of Djoser and his architect, none of them were able to successfully build a pyramid until Sneferu came to the throne.

The Step Pyramid was truly a revolutionary structure. As such, it might perhaps be expected that a long life of comparable Step Pyramid structures would follow Djoser’s. However, although a few specific elements would be borrowed from Djoser by later generations, the step pyramid did not endure long in the history of Egypt.

The Pyramid of Sekhemkhet at Saqqara was an attempt to build a pyramid complex similar to that of Djoser. Placed not far from Djoser’s Step Pyramid, this pyramid–referred to by some scholars as the Buried Pyramid–never rose above its rectangular enclosure. The reason remains unclear, but the pyramid was abandoned soon after it was begun.

After Sekhemkhet’s failed attempt comes another unsuccessful try. The Layer Pyramid of Zawyet El-Aryan is another 3rd dynasty attempt at constructing a Step Pyramid Complex. This pyramid is shrouded in mystery even more than that of Sekhemkhet. Scholars estimate that had the pyramid been completed, it would have risen around five steps to a height of between 42 to 45 meters.

The Layer Pyramid departed from the trend set by Djoser, followed by Sekhemkhet who built their structure far out in the desert. The Layer pyramid, however, was planned to be built on a ridge, not far from the floodplain.

After these two unsuccessful attempts we see the rise of King Sneferu, and with him come the First true pyramids of ancient Egypt.

When Sneferu, the first King of Manetho’s 4th Dynasty came rose to the throne of Egypt around 2,575 BC, the Step Pyramid of Djoser was the only standing pyramid in Egypt.

Sneferu would change that and become the greatest pyramid-builder in the history of ancient Egypt by building three pyramids; one at Meidum and two at Dahshur.

The Frist true pyramids are therefore those at Meidum and Dahshur.

Of these three the pyramids at Dahshur are the superstars of the ancient world.

The pyramid at Meidum is thought to have started off as a classical Step Pyramid following many elements set forth by Djoser. The Pyramid at Meidum is believed to have first stood as a Step Pyramid, but later in Sneferu’s reign, it was changed to a smooth-sided pyramid, therefore representing the very beginning and end of Sneferu’s fascinating pyramid building program.

Scholars argue that during either the 28th or 29th year of his reign, Sneferu ordered his pyramid builders to go to Meidum and reconstruct the Step Pyramid of Meidum into a true pyramid with a slope of 51° 50′ 35”, essentially the same as Khufu’s.

However, the pyramid at Meidum did not stand the test of time, and most of the structure remains in ruins.

Today, the pyramid stands as a three-stepped tower rising above an abundant mound of debris.

The appearance of the pyramid of Meidum today would be that of a pyramid still under construction, as well as one that had been partially stripped of its casing stones.

How the Bent Pyramid got its bend

Some scholars could argue that the Pyramid at Meidum may not have been a successful attempt at building a pyramid. If it was intended as a smooth-sided one, then we can concur that the attempt was unsuccessful.

Luckily, Djoser left us with a legacy in stone. His two pyramids at Dahshur are like a pyramid-building encyclopedia embedded in stone.

The Bent Pyramid specifically tells a story like no other pyramid in Egypt.

This pyramid is a unique example of early pyramid development in Egypt and represents a transitional form between classical step pyramids introduced by Djoser, and smooth-sided pyramids that would later be used by other 4th Dynasty pyramid builders.

When Sneferu decided to build his pyramid at Dahshur, ancient Egypt still lacked a blueprint for a true pyramid. Scholars have argued that before the Bent Pyramid was planned, Egypt was still going through a kind of transitional pyramid-building phase, with many experimentations that would eventually result in a true, smooth-sided pyramid.

Older step pyramids had sloping faces of around 72° to 78°, obviously too steep for a true pyramid.

The core of the Bent pyramid offers evidence that the structure began as a smaller pyramid with a slope at around 60°.

However, through construction the builders were faced with structural problems that made them add girdle around the stump of the pyramid, resulting in a slope of just under 55°.

The early building stages of the pyramid saw its constructors lay the courses with stones sloping inward. However, even the reduced angle of just under 55° still resulted in integral issues and just about halfway up, the builders began setting the courses horizontally, finally seeing that by placing inward-leaning course the pyramid because under increased integral stress.

The builders, therefore, decided to continue the pyramid at a much smaller slope of between 44° to 43°.

Therefore, the pyramid rises from Dahshur’s desert floor at a  54-degree inclination but has its upper section–just above 47 meters from the ground–built at a much shallower angle of 43 degrees, resulting in the pyramids very obvious bent shape.

This pyramid is also unique of around 120 pyramids in Egypt because most of its original polished limestone outer casing remains largely intact.