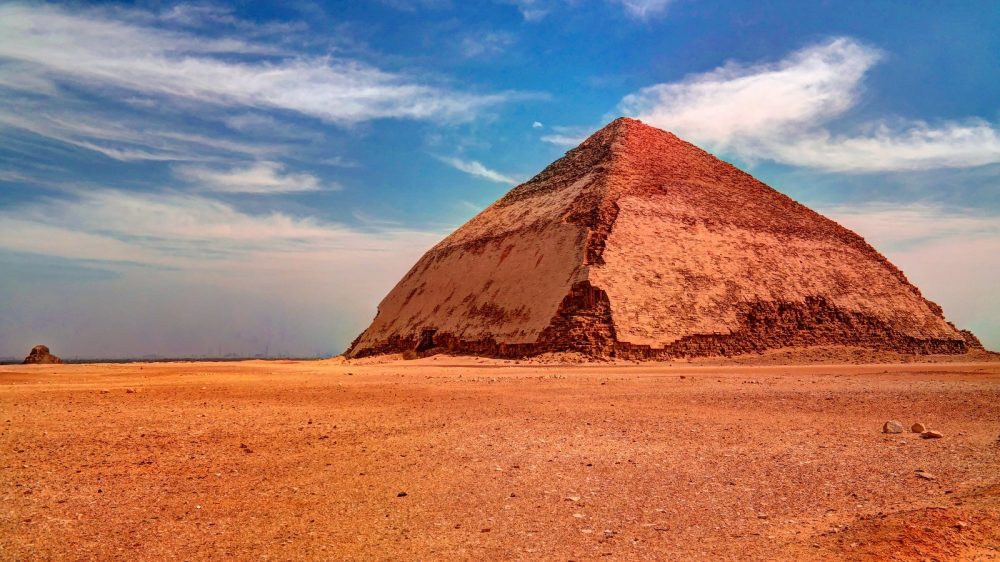 The Bent Pyramid is also known as the False, or Rhomboidal Pyramid because of its changed angle slope.

Commissioned by Pharaoh Sneferu around 2,600 BC, the Bent Pyramid at Dahshur is one of the finest examples of pyramids in ancient Egypt, because it represents a transitional phase of ancient Egyptian Pyramids.

Originally designed as a true pyramid with the steep 54-degree angle, during construction its builders decided to alter its shape, finishing it off with a much shallower able of 43 degrees, resulting in the pyramids ‘bent’ appearance we see today.

The Bent Pyramid of Dahshur is regarded as a transitional pyramid where the ancient Egyptian discarded previous step pyramid building techniques, adopting a smooth-sided pyramid shape.

The Bent Pyramid is also known as the False, or Rhomboidal Pyramid because of its changed angle slope.

The Pharaoh who commissioned the Pyramid, Sneferu, was the man who would later provide the basic labor structure that was needed to build the most amazing pyramid Egypt has seen: The Great Pyramid of Giza, commissioned by Sneferu’s successor Khufu.

The original steepness present at the Bent Pyramid may have been an issue for its builders. Experts have put forward a theory suggesting that its extreme steepens of the angle of inclination may have led towards instability during initial construction. The terrain on top of which the pyramid was erected was also an issue for its builders. The Bent Pyramid was built on soft, silty clay.

This is most likely the reason why its builders opted to reduce its steepness, continuing the construction with a much shallower angle of 43 degrees.

Evidence to support this idea is located not far from the Bent Pyramid. The adjacent Red Pyramid built almost immediately after the completion of the Bent Pyramid shows an angle of 43 degrees from its base.

In his 1974 book “The Riddle of the Pyramids”, Kurt Alfred Georg Mendelssohn, German-born British medical physicist who had a great passion for Egypt and pyramids, in general, postulated the idea that the change in steepness seen at the pyramid was a security precaution that resulted from the catastrophic collapse of the  Meidum Pyramid while it was still under construction.

But in addition to its unusual shape and angle, the Bent Pyramid is unique in more ways than you’d probably ever imagined. It is considered one of the most unique pyramids of ancient Egypt since its original polished outer casing made of limestone remains largely intact. In fact, no other pyramid has so much of its casing stone still present.

Its name, the Bent Pyramid of Dahshur, was not used in ancient times. The ancients generally called the pyramid (translated) The)-Southern-Shining-Pyramid or Sneferu-(is)-Shining-in-the-South.

If the pyramid was completed around 2,600 BC, it means that as of writing, the Bent Pyramid at Dahshur is 4,618 years old.

The Bent Pyramid’s complex contained a Pyramid temple of which only fragments remain today. Archeologists argue that the temple may have been similar to the one located near the Pyramid of Meidum. Two stelae lacking inscriptions have been found behind the temple.

Like many other ancient Egyptian pyramids, the Bent Pyramid of Dahshur was accompanied by a so-called satellite pyramid, erected in ancient times serving as the building where the Pharaoh’s Ka was kept. The satellite pyramid was erected around 55 meters south of the Bent Pyramid. It originally measured 26 meters in height and nearly 53 meters in length. Built of relatively thick limestone blocks, the stones were arranged in horizontal rows and then covered with fine limestone quarried at Tura.