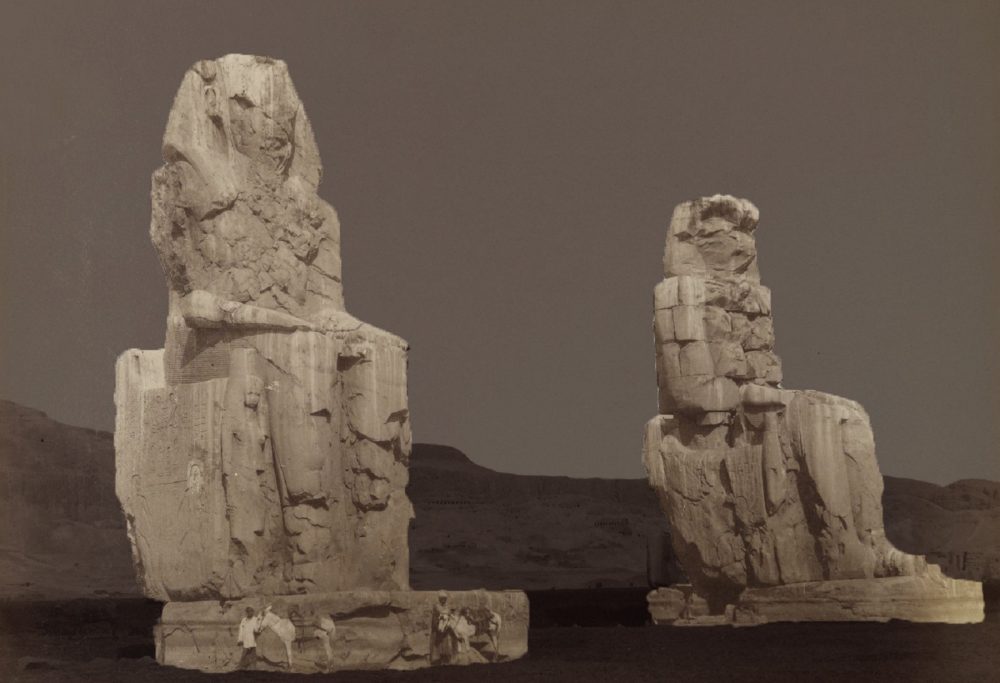 Each of the statues weighs around 720 tons. The Colossi are made of quartzite sandstone which was quarried at el-Gabal el-Ahmar (near the Pyramids of Giza) and transported 675 km (420 mi) overland to their current position. All of this, more than 3,300 years ago.

In the middle of what is now Egypt stand two towering ancient statutes dubbed the Colossi of Memnon. Each of them reaching a height of 19 meters (60ft). It has been calculated that each of the states weighs 720 tons.

Located no more than 15 meters (50ft) apart, the massive quartzite sandstone are believed to depict Pharaoh Amenhotep III. The statues were transported more than 675 kilometers away.

West of Luxor stand two massive ancient statues representing Pharaoh Amenhotep III, an ancient Egyptian King who ruled over the land of the Pharaohs during the Since 1350 BCE, they have stood in the Theban Necropolis, located west of the River Nile from the modern city of Luxor.

Their heavily eroded shape speaks of their antiquity. The features of the statues located just above the waist are nearly unrecognizable. The statue to the south is made of a single piece of stone, while the northern figure has a massive crack in the lower half and above the waist, consisting of five tiers of stone.

The statues have been reconstructed and repaired throughout history. Analysis of the statues has revealed that the upper levels are made of a different type of sandstone.

Although they are heavily damaged, it is believed that once completed, the statues were most likely identical to each other, only featuring minor inscriptions and art that may have varied.

The Colossi of Memnon were beautifully decorated and served as guardians to Amenhotep’s memorial temple (or mortuary temple): an extensive construct erected during the pharaoh’s lifetime, where he was venerated as a god-on-earth both before and after his departure from this world.

Amenhotep’s temple was a wonder of its own. In its day, the massive structure was the largest and most luxuriant anywhere in Egypt, covering a total area of more than 35 hectares rivaling that of Ramesses II’s Ramesseum or Ramesses III’s Medinet Habu and even the Temple of Karnak, which were much smaller in terms of area.

The statues depict the king in a seated position with the hands placed on the knees, facing eastwards towards the River Nile. The stones used in the statues’ construction are one of the biggest mysteries of the statues; they were quarried at el-Gabel el-Ahmar, not far from the Giza Pyramids, transported towards upper Egypt (south) more than 675 kilometers.

We are talking about 720-ton statues, not rocks that weigh a few tons.

All of this was done around 1350 BC, more than 3,300 years ago. Since the stones were too heavy to have been transported upstream using boats, it is believed the quartzite sandstone was transported via land by means wer are still unable to understand.

Transporting statues weighing a few tens of tons may have been challenging, but it is completely mindboggling to find out that somehow, thousands of years ago, the ancients managed to move stones that weigh several hundreds of tons.

Although a wonder of engineering, both the statues and the temple, this miniature ancient wonder did not stand the test of time like other ancient Egyptian monuments, soon after the completion of the temple, the area was struck by a massive earthquake that destroyed everything but the massive colossi at its entrance standing.

The statues did not go undamaged. The earthquake of 1200 BC, which destroyed the mortuary temple, struck a great deal of damage to the statues. Eventually, another earthquake around 27BC further destroyed the colossi, which were then partially reconstructed by Roman authorities.

The earthquakes opened numerous holes in the ground around the temple, most likely burying many statues, some of which may have been in pristine condition. An extensive archeological survey of the area has revealed important clues about the temple and its surrounding area.

Archeologist Hourig Sourouzian has shown that the ancient temple complex–guarded by the colossi–was made of three massive pylons fronted by colossal statues.

Around 200 statues and fragments of statues are currently held at the Luxor Museum. Some of these are on display, while many others await restoration and conservation.

The earthquake that struck the region in 27 BC reportedly caused a great deal of damage to the northern colossus shattering it and causing it to collapse from the waist up while cracking its lower half.

Although tragic due to the lost history, the collapse of the statue gave rise to a myth that the colossi would sing on numerous occasions. It was said that within an hour or two of sunrise, the rupture in the statue would cause it to produce a curious sound right at dawn.

The sound was often reported more frequently in February or March, but experts argue there wasn’t an actual pattern that the sound followed.

The earliest report of the singing Colossi of Memnon is that of Greek Historian Strabo who wrote that the colossi would produce a sound “like a bow.” Others reported the sound as being similar to the striking of brass or even whistling.

This odd noise eventually gave rise to the legend of the Vocal Memnon. Reportedly, hearing the sound brought luck to the person. The colossi reportedly also had oracular powers. This mixture eventually made the colossi famous outside of Egypt, which led to a massive flow of tourists, including Roman emperors, who traveled to Egypt to marvel at the ancient statues.

During the Roman Era, the upper tiers of sandstone were added (the material may have come from Edfu, north of Aswan), reconstructing the statue. The original upper half was never found.

Although it remains unclear when exactly the statute was repaired, local tradition gives us a timeline that coincides with the reign of Roman Emperor Septimius Severus, around 199 AD.

The singing sound’s exact cause remains a mystery, although two explanations have been offered: one of a natural origin and another one humanmade.

If the phenomenon was of natural origin, it most likely was caused by the rising temperatures and dew evaporation within the porous rock.

Curiously, similar sounds have been reported coming from other ancient Egyptian monuments, with the temple of Karnak being one of the locations.

One of the greatest mysteries in ancient Egyptian architecture and engineering is how massive stones were transported. In other words, how did they transport 720-ton statues?

We know of ancient papyri that document the transport of stones weighing several tons via boat down the river.

But for larger stones–some of which may have been used in the construction of the pyramids–the transportation methods must have been different.

Experts proposed that some of the stones used in the construction of the pyramids were moved across the desert sand. The builders would place the massive rocks on a sled, and workers would pull it over the sand.

Experts argue that the ancients may have made the desert in front of the sand wet to make it tougher and easier to transport.

One research argues that “sliding friction on sand is greatly reduced by the addition of some — but not that much — water.”

The study argues that the amount of pulling force required to move a massive rock was reduced–apparently by as much as fifty percent–if the ancients poured water onto the sand in front of the sled since it glides far more easily over the firm and wet sand because the sand does not tend to pile up in front of the sled, compared to the dry and hot sand.

However, we must bear in mind that this is with stones that weigh less than ten tons.

When it comes to much heavier stones–like the Colossi of Memnon, the issues become clear. Is it possible the ancient Egyptian used techniques and devices that are now lost to history? More importantly, why did the ancient Egyptians not find a need to document how such a massive undertaking was achieved? After all, moving 720-ton statues was no easy task.