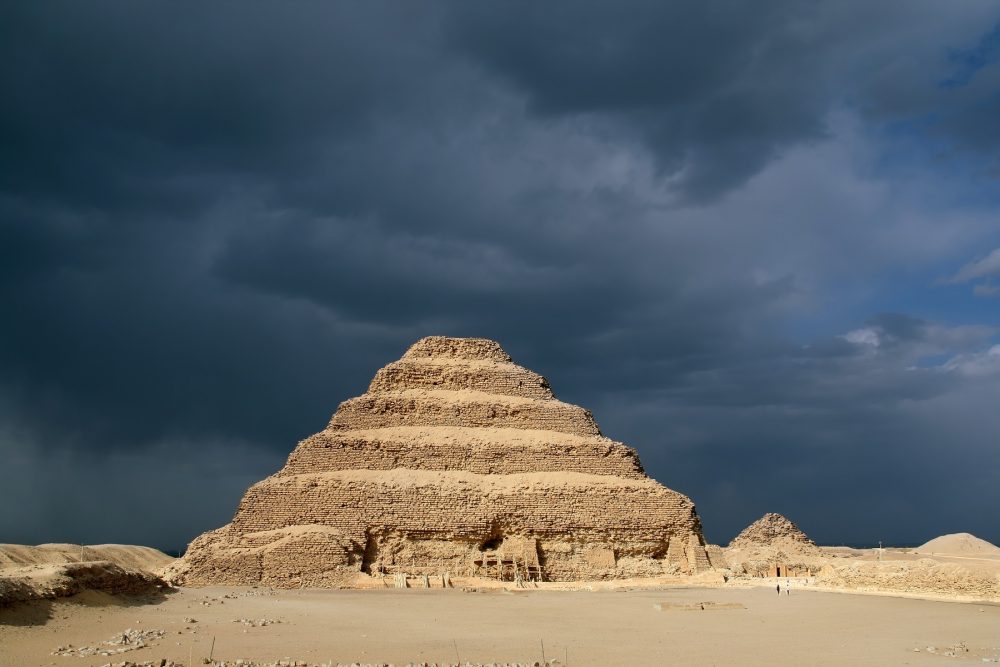 Did the first Egyptian pyramid evolve from a much simpler monument called the mastaba?

When it comes to the impressive and famous monuments of ancient Egypt, Pyramids fascinate everyone even till the present day. When mentioning Egypt, the first thing that springs to mind are pyramids. The advancement of pyramid designs, as a tribute to the memory of Egyptian kings, started with a single monument, the Step Pyramid of Djoser, located in Saqqara.

The Step Pyramid of Djoser was the earliest Pyramid built in Egypt. Djoser was an Egyptian king who reigned in the third dynasty. The ingenuity and innovations characteristic of the Pyramid was attributed to Imhotep, who was later deified as a god-like figure throughout Egyptian history.

The construction of the Pyramid began as a flat-roofed structure, a kind of square mastaba which was eventually expanded into a 197-foot-high pyramid comprising six layers. This process, the transformation from a square mastaba into a six-stepped pyramid, is believed to have taken at least nineteen years to complete.

The Pyramid, built with 11.6 million cubic feet of clay and stone, also houses subterranean tunnels forming a 3.5-mile-long labyrinth–the largest of its kind. In fact, never again in the history Egyptian pyramid building would such a massive subterranean world be built. The massive limestone wall surrounding the entire pyramid complex has 13 fake doorways and real colonnade entrances.

The Pyramid has a temple on the north side with a statue surrounded by minute stone structures known as serdab. On the southern side of the Pyramid sits a court with an altar demarcated with stones. In addition to the complex structures were several chapels located in the north, south, and southeast pavillions. The chapel in the southeast of the complex presumably served the king to enact the Heb-Sed festival, supposedly in the afterlife.

The mysterious tomb is situated in the southern part of the complex with many tunnels.

Burial Chamber of the King Djoser

Underneath the step pyramid lay a bewildering number of chambers and tunnels at the center of which occupied the 90-foot-deep shaft burial chamber of king Djoser.

In ancient times, the subterranean vault was adorned with limestone blocks decorated with five-pointed stars. However, these decorations were later ditched for a simpler granite burial chamber, perhaps because of tomb raiders.

Findings have shown that with serious attempts to preserve the step pyramid, the tunnels beneath the Pyramid might collapse, especially because the Pyramid had survived several decades and has deteriorated throughout time.

Years back, efforts to conserve the tomb was started by an Egyptian-led conservation group. In recent times, a British engineering firm known as Cintec took up the challenge of keeping the Pyramid safe. The company used monumental airbags to keep the roof in place while carrying out permanent repairs, safeguarding the Pyramid for generations to come.

The Pyramid housed two subterranean passages that branched into various magazines, chambers, and rooms, a unique tunnel for food offerings, and an uncompleted underground palace presumably designed for the afterlife.

There were three false doors revealing where the king was engaged in rituals. The chamber is adorned with hundreds of blue faience tiles similar to the reed matting found in the king’s real-life palace in Memphis. Housed on the east side was a tunnel containing 40,000 stone vessels that belong to the king’s ancestors.