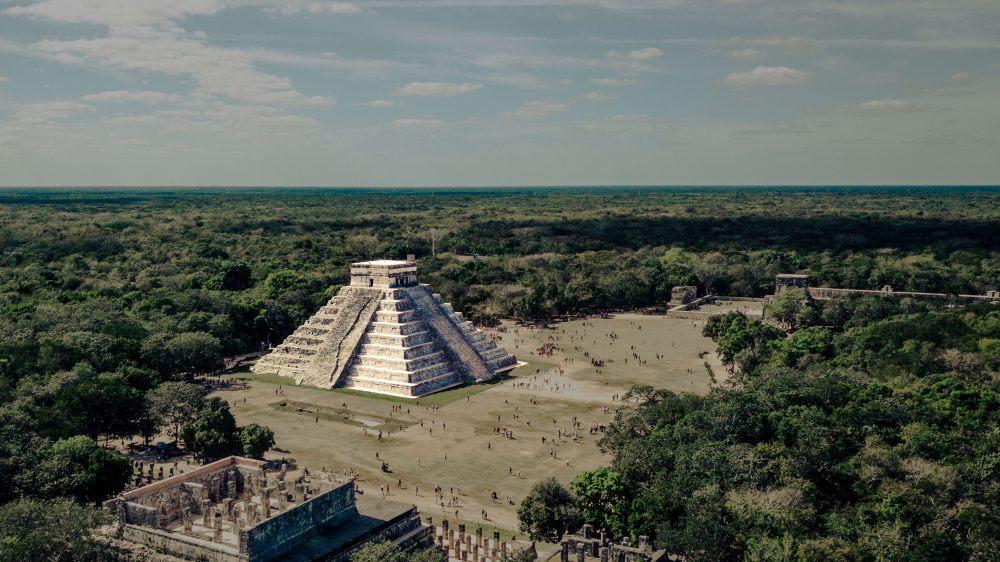 Here's a collection of aerial images of the ancient American pyramids. Did you know that the largest pyramid on Earth is located in North America?

Thousands of years ago, humankind built pyramids across the globe. Nearly everywhere we decide to look; eventually, we will come across ancient pyramids that have stood the test of time. There are pyramids everywhere. Africa, Asia, Europe, and across the entire American Continent, from North to South.

Some of the oldest pyramids on Earth are thought to have been constructed over 5,000 years ago in Brazil. Scholars estimate that there were as many as one thousand pyramids in Brazil alone. In addition, thousands of other pyramids were built further north across Central and North America.

In Egypt, the pyrmaidomania is believed to have begun during the Third Dynasty reign of Pharaoh Djoser. Egyptologists believe that the Step Pyramid of Djoser, the first of Egypt, was constructed around 4,700 years ago and resulted from the evolution of the mastaba tomb. Djoser’s Step Pyramid is the central feature of a vast mortuary complex in an enormous courtyard surrounded by ceremonial structures and decoration. In total, Djoser’s pyramid complex covers 15 ha (37 acres) and is about 2.5 times as large as the Old Kingdom town of Hierakonpolis.

But even before Djoser, around 300 years, halfway around the globe in what is now Brazil, a mysterious “lost” civilization erected some of the first pyramids on the surface of the planet.

Unlike those constructed in Egypt, their pyramids were not built of multi-ton stones but were made out of lesser materials and mostly out of seashells. Despite the lack of massive stones, some of these pyramids have survived the test of time. Unlike their Egyptian counterparts, the Brazilian pyramids don’t look like much today.

Most of them are barely visible and were—still are—mistaken for massive piles of rubble or trash. Many of them have long been overtaken by dense layers of vegetation, which is one of the main reasons many of the pyramids were destroyed in the 20th—21st centuries, as people thought they were no more than rubble. Many were destroyed, and their materials were reused in the construction of modern settlements and buildings.

Strangely, the same thing happened thousands of years before in ancient Egypt, when many of its pyramids were destroyed on purpose, and their materials were used in the construction of various buildings across Egypt. Is nothing ancient sacred to us anymore?

The Brazilian pyramids were massive monuments. One Brazilian Pyramid, located near the town of Jaguaruna, covers a total area of 25 acres. The pyramid is once believed to have stood more than 167ft high.

Elements of some Brazilian pyramids resemble those that have been found on some Central American pyramids. For example, archaeologists have found traces of structures built on top of the pyramids resembling altars or miniature rooms. However, the Brazilian pyramids are between 3000 and 2000 years older than some pyramids in Central America. Thus, it remains unlikely, although entirely possible, that cultures across America were in contact more than 3,000 years ago.

The Brazilian pyramid appeared and disappeared rapidly. Eventually, and entirely independently, cultures in Central America would develop their own versions of pyramids. However, unlike those built in Brazil, many pyramids across South, Central, and North America were built of much stronger materials.

Peru has examples of a few. The Pyramids of Caral—Caral being also a city and empire—are among the oldest pyramids on the American continent. Some would say its pyramids can compete with the Brazilian as the oldest on Earth. Among archaeologists, the ancient city is regarded as the most extensively recorded site in the Andean region, with conclusive data showing dates older than 2,600 BC.

More importantly, it has been suggested that Caral may have served as a model for later urban design developed by Andean civilizations that came and went for thousands of years. The Pyramids of Peru were numerous yet fewer than those built by civilizations in Brazil. Unlike the Brazilian, the pyramids of Peru were made of stone and were therefore much more difficult to erect.

The Huaca Pucllana pyramid is another ancient wonder in Peru, although built of adobe brick and not multi-ton stone. Located in the Miraflores district of Lima, the Pyramid is thought to have served in ancient times as an administrative and ceremonial center for the pre-Inca Lima culture. This adobe pyramid is thought to have been built around 1,500 years ago. Similar others exist in Peru, such as the Huaca del Sol and Huaca de la Luna.

Peru’s Huaca del Sol pyramid is a massive structure built with a mind-boggling 130 million adobe bricks. It is thought to have been built around 450 CE and was the largest Pre-Columbian adobe structure ever built in the Americas.

Further north, in what is now Bolivia, numerous ancient civilizations built intricate structures. One particular site in Bolivia is of great interest to scholars; Tiahuanaco (Tiwanaku). It is one of the largest sites in South America. It covered around 4 square kilometers. The site is home to the Akapana, a cross-shaped Step pyramid that is 357 meters wide, 197 m broad, and 16.5 m tall.

Many other pyramids exist throughout South America, and we couldn’t possibly cover them all in one article.

Moving further north from Bolivia, we begin venturing into the territories of ancient civilizations that inhabited Central America. Here, some of the most sophisticated and complex ancient cultures developed over thousands of years. The Aztecs, Maya, Olmec are just a few of the many civilizations that erected some of the most massive monuments in Mesoamerican history.

Inprese4nt day Belize, we have a series of smaller pyramids. The archeological site of Caracol is home to one of the tallest pyramids in Belize. The Pyramid, dubbed Caana, is triadic. In Guatemala, we have a pyramid temple with an estimated total volume of over 2,800,000 cubic meters, making it one of the largest pyramids on Earth, even larger than the Great Pyramid of Giza. The Pyramid is known as La Danta, and it was built in the ancient city of El Mirador.

Venturing into present-day Mexico, southeast of the state of Campeche, we find the ruins of the ancient city of Calakmul, a Maya city whose name translates into the “city of the two adjacent pyramids.” Its pyramid, known as structure II, is one of the tallest pyramids in the region, over 45 meters (148 ft) high.

Another series of striking pyramids can be found in the ancient city of Tikal (Guatemala). The tallest pyramid of Tikal is a structure known as Temple IV. This pyramid is not only the tallest in Tikal, but it is also regarded as one of the tallest and most voluminous buildings in the Maya world.

Here’s a stunning view of Tikal and one of its pyramids, not giving in to the fog surrounding it.

One of the most impressive and important cities of the Ancient Maya was Chichen Itza, located in the Yucatan Peninsula of present-day Mexico. Its pyramid, dubbed el Castillo, is one of the most famous Maya structures in the world. Here’s an aerial image of the pyramid.

Traveling further into present-day Mexico, we come across a series of unique pyramids in the state of Veracruz. The ancient city of El Tajin is home to the so-called Pyramid of Niches, which is essentially a massive stone temple that served as a calendar. The pyramid’s outer decoration comprises 365 niches, not including those hidden under the staircase and including those that divide it into two halves by its central part. They are thought to represent the solar year.

In Central Mexico, we find some of the most impressive pyramids. The ancient city of Teotihuacan is perhaps the most impressive pre-Columbian city of Central Mexico. It is home to some of the largest pyramids that were ever built thousands of years ago. The Pyramid of the Sun, the moon, and the Temple of Quetzalcoatl are three of its majestic pyramids. Here’s what these ancient structures look like from the air.

According to the Guinness Book of Records, its incredible size means that it occupies the largest pyramid and the largest monument constructed on the planet. The best part is, this gigantic monument is hidden nearly completely from sight, located “inside” a hill. Not knowing what lay beneath a hill, the Spanish built a Church atop of it.

Since the pyramid is not visible, this image below—a representation of the pyramid and what lies beneath the hill and church—shows us the pyramid’s sheer size.