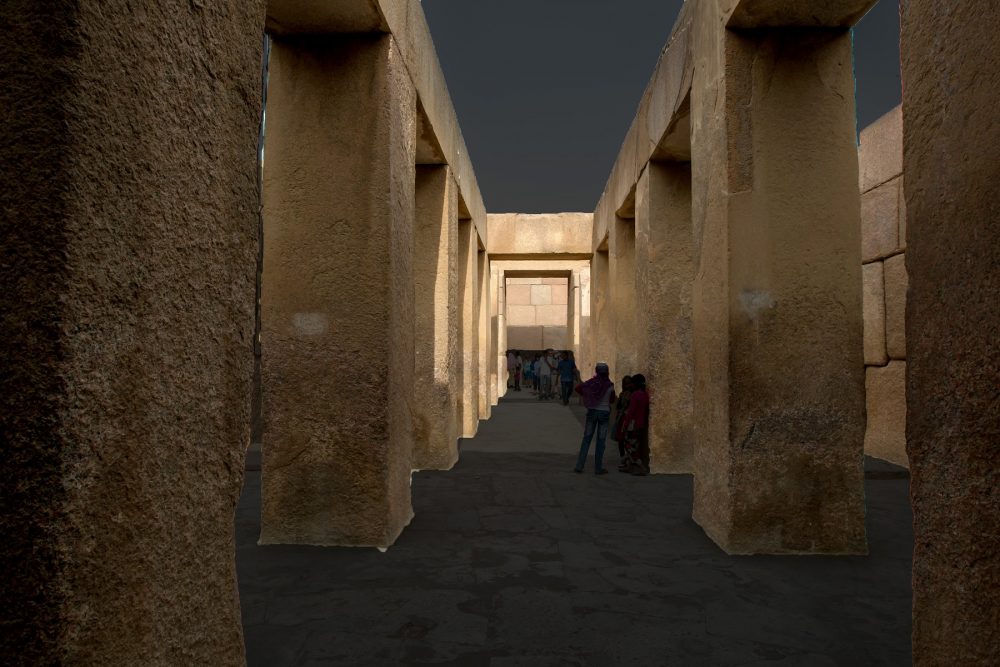 Thousands of years ago, the ancient Egyptians managed to transport massive stones of block some of which weigh around 200 tons. Today, transporting loads exceeding 50 tons require special machines.

Throughout the extensive history of Egypt, this ancient civilization has managed to construct some of the most challenging and daring structures the history of archeology has ever witnessed.

Not only did the ancient Egyptians construct some of the most impressive pyramids, but they also had the uncanny ability to erect massive temples, using gigantic pieces of stone.

Their architecture was unique. Magical, for some, the ancient Egyptians were keepers of construction techniques that remain a profound enigma for us today, leading many authors to say that if impossible engineering existed anywhere on Earth, it did so in Egypt thousands of years ago.

Although both Upper and Lower Egypt are home to countess ancient structures, it is in Lower Egypt not far from present-day Cairo where some of the most challenging constructions remain standing today.

Thought to have been thousands of years ago, some of these monuments defy logic.

The Giza plateau is perhaps the best example of what many would call “impossible engineering.”

The most striking monuments at the plateau are without a reason of a doubt the three pyramids and the Sphinx.

According to mainstream experts, the pyramids of Khufu, Khafre, and Menkaure were all built during the Fourth Dynasty of Egypt. The three pyramids are seen as the most incredible architectural achievements in the history of the ancient Egyptian civilization.

Although impressive beyond a reason of a doubt, the pyramid at Giza are some of the most mysterious structures ever erected in Egypt.

There is no single ancient text dating back to the time of Khufu, Khafre, or Menkaure that mentions anything about the pyramids.

No ancient text has ever been recovered in Egypt that speaks of the exact purpose of the pyramids. There is no inscription from the Fourth Dynasty or earlier that describes the methodology involved in constructing the pyramids.

Nothing whatsoever exists that tells us how it was possible for the ancient Egyptians to construct, around 4,500 years ago, a pyramid as that of Khufu.

With an estimated total weight of 6.5 million tons, the Great Pyramid of Giza is considered the most perfect pyramid ever built by human hands.

Egyptologists estimate that around 2.3 million blocks of stone were involved in its construction process. The total volume of the Great Pyramid is calculated at 2,583,283 cubic meters (91,227,778 cu ft).

Impressive beyond doubt, the Great Pyramid of Giza has attracted scholars, authors, and tourists for thousands of years for different reasons.

Some have admired the incredible size of the Great Pyramid; others have been left perplexed by its precision and design. Many more have been attracted almost like a magnet to the pyramid thanks to the countless mysteries and legends that surround it.

And just as we are baffled by it today, writers and experts have been so thousands of years ago. Of the many problems concerning pyramids, their construction—and transportation of materials—is perhaps the most puzzling.

Even in antiquity, the Roman writer Pliny the Elder, who condemned the pyramid as an “idle and foolish exhibition of royal wealth,” concluded that there was much to wonder at.

He wrote: “…the most curious question is how the stones were raised to so great a height.”

However, years after the pyramids were built, I believe that anyone who visited the massive structures has stared upon the mighty monuments and wondered how they were built.

Building a structure comprised of more than 2.3 million blocks was a staggering project in antiquity. Thousands of years later, it remains equally challenging, but bear in mind that more than 4,500 years ago, when the Great Pyramid is thought to have been built, the Egyptians did not possess technologies such as the pulley or the wheel.

The pulley, for example, was introduced to the Egyptians during Roman times.

This means that more than 4,500 years ago, the Egyptians somehow built the pyramids with the simplest methods at their disposal.

Take into consideration that even with today’s modern equipment and technologies, building a monument such as the Great Pyramid of Giza would be beyond challenging.

Egyptologists assume that the ancient Egyptians used copper chisels, as well as flint, quartz, and diorite pounders, to produce the stones necessary for the construction project. In addition, they are believed to have made use of large wooden crowbars, and for transportation eighter sleds and/or rollers.

In addition to the might pyramids, the Giza plateau is decorated by a number of temples. The temple complex at Giza consists of the so-called Sphinx Temple and the Valley Temple, which is believed to have been built by Khafre.

The Valley temple is located just east of the Sphinx.

Of the two, the Valley Temple is the larger structure measuring around 40 meters (130ft) each side, which gives it a square shape. The Sphinx temple, on the other hand, was built having a much more pronounced rhomboidal shape, with sides measuring around 33 meters (100 feet).

These two temples are thought to have stood around 40 feet high. The builders used gigantic limestone core blocks, and both temples were cased in granite. Both temples are left roofless, and their original ceiling beams have been lost to history.

The Valley temple, however, still retains is original sixteen interior columns, and its architraves remain in place inside the T-shaped central hall.

Although these temples are different, they share a similar building style, but most importantly, both temples were built using monstrous megalithic blocks of stone, some of which have an estimated weight of more than 200 tons apiece.

In fact, the two Giza temples were built mostly out of massive blocks of stone, the smaller of which weigh no less than 50 tons.

It is, therefore, difficult to understand how such massive pieces of rock were lifted and positioned into place by the ancient Egyptians.

Regrettably, there are no ancient documents that mention how this was achieved and using what kind of technologies.

Even today, attempting to move and position massive blocks of stone weighing at least 50 tons would be a formidable challenge for contractors despite having cranes and vehicles.

As explained by Bauval and Hancock, modern cranes—which are sophisticated machines—can generally ‘pick’ a maximum load of 20 tons at what is called ‘minimum span’—i.e., at the closest distance to the tower along with the ‘boom’ or ‘arm’ of the crane. The longer the span, the smaller the load, and at ‘maximum span’, the limit is around 5 tons. Loads exceeding 50 tons require special cranes.

“There are few cranes in the world today that would be capable of picking 200-ton blocks of quarried limestone. Such cranes would normally have to be of the ‘bridge’ or ‘gantry’ type, often seen in factories and at major industrial ports where they are used to move large pieces of equipment and machinery such as bulldozers, military tanks, or steel shipping containers,” Bauval and Hancock write.

In other words, despite our extremely advanced engineering and technologies, modern contractors are greatly tested when trying to transport loads that have a weight of more than one hundred tons.

Despite this, thousands of years ago, the builders in ancient Egypt had the ability to pick up massive, 200-ton stones without difficulties, and had the technical capabilities of not only moving these massive blocks but precisely positioning them within their buildings.

How this was achieved in ancient Egypt remains a profound enigma.