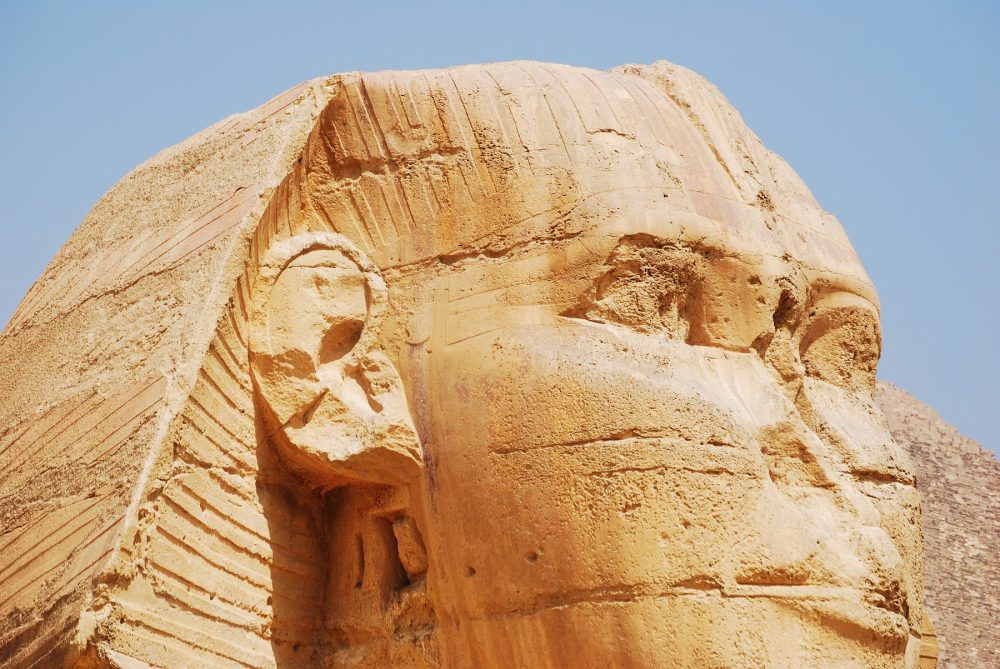 How long has the Great Sphinx stood inspecting the horizon while guarding the pyramids? Whose image does it bear, and how old is the Sphinx? What was its function, and does the Sphinx have a "higher" purpose?

Of all the ancient monuments that have been built by ancient civilizations across millennia, none compares to the great Sphinx of Giza. Standing at the footsteps of some of the greatest structures ever erected in ancient Egypt, this ancient monument hides numerous mysteries. It has intrigued people more millennia, and already to an ancient civilization, the Sphinx was antique and perplexing.

Abul-Hol, as Arabic writers would call the Sphinx in recent times, the Great Sphinx’s name translates to “Father of Terror,” although the statue itself is anything but terrifying.

What is terrifying is the lack of information and details we have about the Sphinx. Even though we have studied the ancient Egyptian civilization coming to understand their history to a certain degree, details about the Sphinx are nearly non-existent.

For thousands of years, this massive statue has remained crouched within a massive trench of bedrock out of which the Sphinx was carved, thousands of years ago, at a time when history was likely not even recorded.

The Sphinx looks old, but its mighty. It looks wounded but never weak. The towering statue, imposing as it is, bears evidence of a time long gone. Bruised and beaten, the Sphinx proudly wears its scars, evidence of its age, and the numerous restorations the monument went through for thousands of years.

But how long has the Sphinx remained in its carved ditch? How long has it remained there, gazing at the horizon while safeguarding the secrets of a civilization? What was its true purpose, and whose image was it meant to portray?

Who were the people who carved the statue from the very limestone that makes up the Giza plateau? Where did they live? Who did they report to, and what kind of plan did they follow when they began digging and carving a massive block of limestone?

What was their final goal? Was it to carve a lion? Portray a living god? Or, as some scholars suggest, did they glorify a Pharaoh, merging an image of a God with a King? It is usually acknowledged in the mainstream community that the Great Sphinx of Giza was initially carved during the Old Kingdom when Fourth Dynasty Pharaoh Khafre ruled over Egypt’s land.

For centuries have scholars searched for answers that would help us understand this magnificent monument and confirm or deny whether or not the Sphinx dates back to the fourth dynasty?

And in our quest for answers, we have been thrown into different and strange areas of study, coming across unexpected discoveries that only seem to raise more questions instead of providing answers.

The more we attempt to understand the Sphinx, the more we see its secrets are perhaps not meant to be revealed.

Nonetheless, we continue studying the Sphinx with every tool at our disposal. We’ve even journeyed back in time using computer simulations trying to understand the Sphinx’s purpose as we observed the night sky over the massive statue, tens of thousands of years ago, as Orion–the Hunter–crosses the Meridian at sunrise, giving Leo the pathway to rise radiant towards the East.

But are the Sphinx’s secrets hidden not beneath it, but above it, in the very sky that ancient civilizations across the world saw as the origin of their creators and gods?

Have we failed to discover the true meaning of the Sphinx because we have looked in the wrong places?

Standard texts of Egyptology, history books, encyclopedia, and a plethora of academic journals all seem to agree that the Great Sphinx is an illustration of Fourth Dynasty Pharaoh Khufu, the builder of the second-largest pyramid at Giza. Most scholars argue that the Great Sphinx was conceived as a representation of the King, and its face was carved in the likeness of the Pharaoh.

The issue with this entire story is that we aren’t sure ourselves what exactly Khafre was like. Since the mummified remains of Khafre have never been discovered, there’s nothing really out there that can tell us what he looked like, other than a statue carved of back diorite, housed at the Cairo Museum.

How can we claim the Sphinx is Khafre’s representation when we alone aren’t sure what Khafre was like?

Nonetheless, the confidence of mainstream scholars that the Sphinx was carved in Khafre’s likeness is striking.

The truth is that the Sphinx could bear the likeness of any Pharaoh, for that matter. According to scholars, the Sphinx’s face could have been carved in the likeness of Pharaoh Thutmose IV, or even Ramesses II, who extensively reconstructed the sphinx around 1280 BC. After all, the Great Sphinx spent hundreds if not thousands of years buried in the sand with only its head sticking out at some point.

As noted by John West, in “Serpent in the Sky,” “through a combination of textual references and historical extrapolations, it’s possible to prove that during the 4500 years that have elapsed since the Sphinx was ostensibly built by Khafre it’s been buried to its neck for as much as 3300 years.”

How can we know that the statue was not recarved to suit the likeness of various kings and rulers during this time?

The Sphinx is truly an eternal sculpture, one that we will probably never understand completely since we cannot even figure out its correct age with 100% certainty, and neither are we able to identify the true shape of its face.

Therefore, the biggest anomaly on the Sphinx is its head.

Since almost anyone could have recarved and re-shaped the face of the sphinx in its long history, there is evidence of major recarving on the sphinx, a fact that even Egyptologists and archeologists like Mark Lehner have acknowledged. Lehner has revealed that the head of the Sphinx, compared to its body, is quite disproportionate. Lehner has written that the head of the Sphinx appears too small compared to the body.

As noted by Lehner, who seems convinced that the Sphinx is the result of Egypt’s Fourth Dynasty, rather than being a finished monument, the Sphinx was the result of a process of learning, where the ancients may not have worked our the canon of proportions between the head of the statues and the nemes headdress.

But Lehner, as well as many other Egyptologists refuse, for some reason, to consider the possibility that the Sphinx is much older than the fourth Dynasty, and that its body, face, and general shape may have been much different in the distant past, despite there being evidence to suggest so.

Considering that the Sphinx may have been a much larger statue in the past, specifically its head, the head’s disproportionate size may be the direct result of one too many recarving of the face of the Sphinx.

Furthermore, as noted by Lehner,  “the division of the face and head into cubits corresponds remarkably with the upper hard layers of Member III bedrock and even with the distinct beds into which Member III is subdivided. The front elevation likewise shows good symmetry, although in the face itself a subtle discrepancy appears to exist between the axis of the head and that of the facial features.”

Hancock and Bauval noted this feature might be indicative of heavy recarving of the statue throughout time, possibly suggesting the Sphinx age goes further back in history than what mainstream scholars would feel comfortable with.

To understand what the Sphinx looked like initially and whether it bears Khafre’s face, scientists have resided to several different methodological studies. One of those studies, in 1993, involved a Lieutenant of the New York City Police Department, a senior forensic artist called Fran Domingo, an officer who worked with identifying suspects and drawing faces for more than 20 years. He was commissioned to study the Sphinx and present the results to the scientific community. After analyzing the Sphinx and countless comparative images of the Sphinx, and the limited depictions we have on Khafre, Lieutenant Domingo concluded that: ”

“After reviewing my various drawings, schematics, and measurements, my conclusion concurs with my initial reaction, i.e., that the two works represent two separate individuals. The proportions in the frontal view, and especially the angles and facial protrusion in the lateral views, convinced me that the Sphinx is not Khafre …”

At best, all we can do is theorize what the Sphinx may have looked like when it was carved. The “when” the Sphinx was carved is another enigma we are unable to solve. Finding out its original head and face would provide experts with much-needed information that could help us devise a chronology through which we could assert the Sphinx age.

Since neither its original shape is known, and its exact age remains a mystery, we can only continue theorizing about the true origin of the Sphinx. But acknowledging and suggesting the Sphinx was carved in the likeness of Khafre is a mistake, as there is not enough evidence to back up the claim.