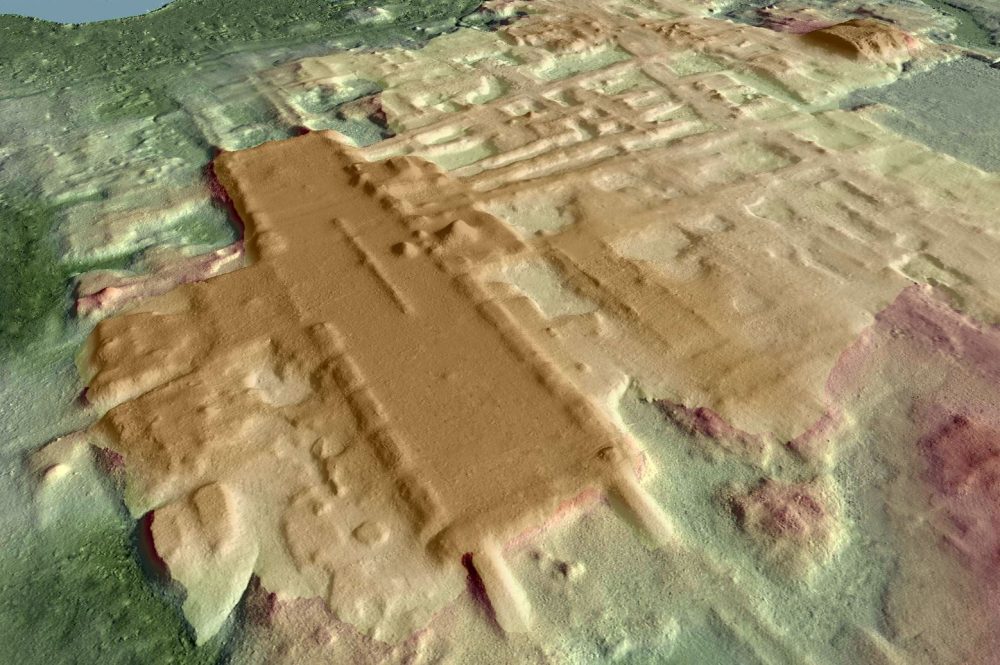 This massive ancient Maya monument is the largest known in all of Mayan history, far exceeding the pyramids and palaces of later periods. The gigantic structure is a raised platform 1.4 kilometers in length. Built with around 4.3 million cubic meters of material, its nearly twice as large (in terms of total volume) as the Great Pyramid of Giza.

Researchers have reported discovering the most massive and ancient monument belonging to the Maya civilization. The structure hints at a far more superior and complex civilization that developed much faster and sooner than archaeologists previously thought.

It has been stated that to build the massive structure, the Ancient Maya used around 4.3 million cubic meters of material. This means that in terms of total volume used in the construction, the recently-found monument is nearly twice as large as the Great Pyramid of Giza, albeit not nearly as tall. Furthermore, unlike the pyramids of Egypt, this monument was built of earthen materials.

The researchers say that to build the structure, 10 to 13 million person-days of work were required. In other words, it likely took thousands of people to build the massive structure.

The existence of the ancient structure not only tells us that the ancient Maya were a very complex society thousand of years ago, but it also hints at less social inequality than in later periods.

The study describing the massive structure discovered in Mexico was published in the journal ‘Nature’.

The massive monument is located in the state of Tabasco, near the northwest border with Guatemala

The monument is almost 1,400 meters long, ranging from 9 and 15 meters in height and includes nine wide roads, making it the largest and oldest Mayan monument ever discovered, according to radiocarbon dating, which places the megalithic strcutre at around 1,000 BC.

The 3,000-year-old structure was discovered by an international team led by Takeshi Inomata and Daniela Triadan from the University of Arizona School of Anthropology in the College of Social and Behavioral Sciences, with the support of the Agnese Nelms Haury University program and the National Institute of Anthropology and History of Mexico.

To explore the structure, the researchers made use of a popular archaeological tool called LiDAR –light detection and ranging– technology, which uses laser-emitting equipment from an airplane to scan the surface and reveal previously unseen buildings.

“To our knowledge, this is the oldest monumental construction ever found in the Maya area and the largest in the entire pre-Hispanic history of the region,” the researchers revealed in a new paper.

“Artificial plateaus may be characterized as horizontal monumentality, which contrasts with the vertical dimensions of pyramids,” the authors write, explaining that as many as nine wide causeways were built extending outwards from the platform which in turn is surrounded by countless smaller structures.

LiDAR is extremely helpful when looking for potential archaeological sites that are hidden beneath the jungle and dense trees; the laser beams penetrate the forest, and their reflections on the ground reveal the three-dimensional shapes of the archaeological elements.

After identifying the structure and its dimensions, the researchers proceeded to explore the massive monument on the surface.

The team excavated the site and 69 radiocarbon-dated carbon samples were collected in order to determine when it was built. To the surprise of experts, the samples returned an age dating between 1,000 to 800 BC. This means that long before the Maya began constructing their famous Step Pyramids, their architects developed massive, intricate structures that would survive for thousands of years.

Until now, the Mayan site of Ceibal, constructed around 950 BC was considered the oldest confirmed ceremonial center.

This monumental structure in Aguada Fénix turned out to be the largest known in all of Mayan history, far exceeding the pyramids and palaces of later periods.

The strange part of the discovery is that this area is developed, it is not in the middle of the jungle, it’s not isolated like many other sites.

People live there, but this site was not known because it is very flat and huge. It just looks like a natural landscape. But with LiDAR, we can see the true nature of the site revealing its monumentality and complexity.

The monumental structure at Aguada Felix helps us shed light on the early development of the Maya, as well as help understand how human societies functioned and organized themselves thousands of years ago to undertake massive construction projects.