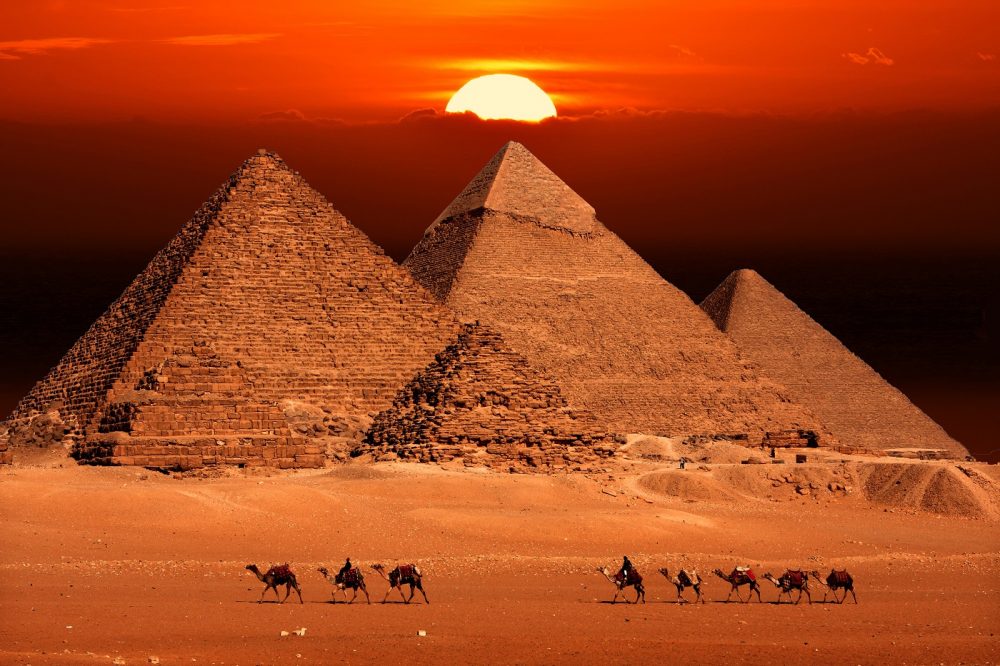 The construction of the pyramids fascinates mankind to this day.

We’ve wondered for decades how the ancient Egyptians built the pyramids. Countless theories have been proposed to explain how this ancient civilization managed to erect the only ancient wonder of the world still standing today. Experts calculate that the ancient Egyptians used around  2.3 million stones, weighing on average 3 tons, to build the Great Pyramid.

So, how were the Pyramids built?

The truth is, we don’t know.

Although the Great Pyramid building process remains a historical enigma, experts have developed a few theories on how the Pyramid may have been built.

This article explores three of the most startling theories that might explain how the Egyptians did it.

The pyramid’s construction is estimated to have started around 2580 BCE and was finished around 2560 BCE.

During the construction, the pyramid builders used approximately 144,000 casing stones that were polished and flat to an accuracy of 1/100th of an inch, about 100 inches thick, and weighing around 15 tons each.

This is how the may have done it.

The Great Pyramid of Egypt: How They Were Really Built?

A fascinating documentary posted on YouTube may shed some light on th building process of the Great Pyramid.

The theory is woven around one of the greatest resources available to the Egyptians at that time: Water.

If limestone blocks were dragged up a mud brick ramp to be placed at the top of the Great Pyramid, where is the evidence of this huge ramp? How could materials such as wooden rollers and mud bricks take the strain put on them by tons of stone?

Check out the videos:

Another video posted on YouTube by John Heisz from “I Build It” offers a new theory on how Egypt’s pyramids may have been built and how the ancient builders moved and stacked 2.3 million stones massive rocks on top of each other, forming a massive pyramid.

Describing the video and the entire process on his website, Mr. Heisz explains: “I’m basing this on what I know about moving big things and the boundless ingenuity of a highly dedicated workforce.

Many would like to believe that some lost technology was used, and I’m not saying that’s not possible, but it discounts what we humans can accomplish when properly motivated.”

Make sure to check out the blog post written by John Heisz detailing the entire process.

Water, Water, and a bit of Sand

Several studies have been penned down, trying to solve the mystery behind the building process of the Great Pyramid.

One particular study, published in 2014 in Physical Review Letters, sheds insight on the building process.

The paper’s authors suggest the ancient Egyptians used a massive workforce to haul massive stones across the desert. But they did so using water.

The ancient Egyptians are thought to have poured water in front of the massive stone blocks that were being hauled to stiffen the sand, making it easier to transport across the desert.

“It turns out that wetting Egyptian desert sand can reduce the friction by quite a bit, which implies you need only half of the people to pull a sledge on wet sand, compared to dry sand,” revealed one of the authors of the paper, Daniel Bonn, a physics professor at the University of Amsterdam in an article published by Live Science.

But not only that, the Egyptians may have built massive channels into the desert originating on the Nile River.

According to experts, there is evidence to support the idea that the ancient Egyptians built waterways that channeled the Nile’s water directly towards the pyramids’ construction site.

It is believed that the ancient builders would load the massive stones onto boats and transport them from the quarries towards the construction site.

Using ramps and a massive labor force, they would transport the stones onto the construction site piece by piece.

Interestingly, archeologist Pierre Tallet discovered in 2013 a fragment of a papyrus journal belonging to a man called Merer, who is thought to have been in charge of transporting building materials to the Pyramid construction site at Giza using boats.

Merer supposedly oversaw a team of around 40 people who were in charge of opening waterways to divert water from the Nile to the Pyramids.

The journal also details trips from Tira to Giza and how they transported the massive stones.