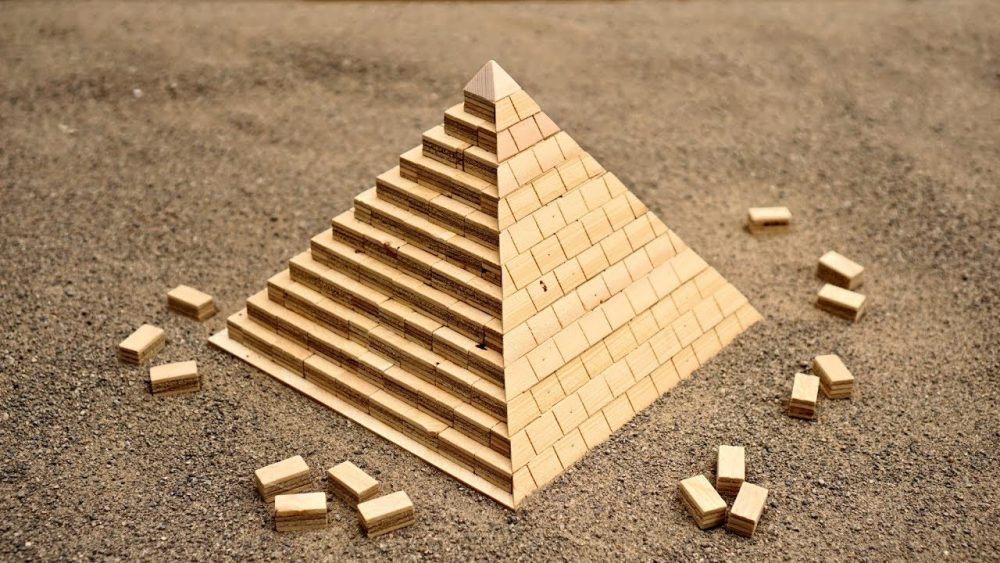 There aren't any writings that tell us how the ancients managed to build the Pyramids at Giza, and what type of technology was used, but this new theory is a refreshing possibility that may explain how these massive structures were constructed.

A ‘refreshing’ new theory caught my attention as I browsed the nearly infinite posts on Reddit.

I love reading what people post in various subreddits, and some pretty catchy videos are posted on the network from time to time. As I was browsing the section, my eyes caught a glimpse of a video titled ‘How I Would Build the great pyramids.’

Although technically incorrect as there is only one Great Pyramid (If we talk about Giza), the video did seem interesting enough for me to give it a view. After all, the mystery of how the Great Pyramid of Giza was built is probably the biggest of them all, when it comes to ancient Egypt, archaeology, and the history of pyramids.

The video, created by John Heisz – from ‘I Build It,’ offers a new way of how the pyramids may have been built in the very distant past and how we could actually do it today.

Even though no one can actually say how the pyramids were built, why they were built, and what their exact purpose was, we’ve theorized about the possible answer to those questions for centuries.

Despite studying the structures built at the Giza plateau as best as we can, we’ve still not answered many of their enigmas.

There aren’t really any writings left that tell us what methods the builders used to construct monuments, such as the Great Pyramid of Giza.

And while John Heisz from ‘I Build It‘ may not have solved the mystery of the building of the pyramids, he certainly made a good point of how we could build the pyramids today and illustrates one possibility of how the ancient builders may have made it possible some 4,500 years ago.

Describing the video and the entire process on his website, Mr. Heisz explains: “I’m basing this on what I know about moving big things and the boundless ingenuity of a highly dedicated workforce. Many would like to believe that some lost technology was used, and I’m not saying that’s not possible, but it discounts what we humans can accomplish when properly motivated.”

“And one thing is abundantly clear – the people that built these were extremely intent on the project. They didn’t do things halfway,” he added.

The builders were motivated alright, as some scholars have proposed that building the Great Pyramid is perhaps one of the greatest, most massive construction projects ever attempted by ancient civilizations.

Mr. Heisz argues that the difficult part of the entire process would be lifting the massive heavy stones quarried and transported to Giza and moving them to the pyramids. But he argues that the ancient builders would never ha e needed to do so.

Heisz explains that his idea involves taking advantage of the blocks’ shape and using it to lift them each level.

“Since the stones were twice as long, the tipping point when stood on end would be the middle. If you’ve ever moved something like a fridge onto the back of a pickup truck, you can probably see how this works,” he explains in a blog post.

“The key is never fully to lift the weight but always have the bulk of it supported. I made this animation to demonstrate:”

The Egyptians may have used levers made of long thick poles to stand the stones. Workers would pull on the ropes from above, and others would help to lift them from below. Once the piece of limestone was lifted, it would be much easier to tip the stone tone to the next level.

“This would be a continuous stream of stones going up, one after the other, and I believe the pyramid was built with step-like areas where this took place. And since a pyramid has four sides, it could be happening on each one. In other words, the “ramp” used wouldn’t be a ramp at all, but a section of stairs in the middle of each side,” explained Heisz.

Here’s the video of the entire process.

Make sure to check out the blog post written by John Heisz detailing the entire process.