Scientists estimate that the total length of the structure is about 1000 light-years.

An international team of astronomers has presented a new study that explains the nature of long-known mysterious celestial structures. The authors of the work hypothesized that the Earth could be surrounded by a giant magnetic tunnel that surrounds not only our star system but nearby stars as well.

Is our planet located inside an invisible magnetic tunnel?

As the authors explain, the North Polar Spur (observed in the northern part of the Milky Way) and the fan-shaped region at opposite ends of the sky visible to us can be connected by magnetized filaments. These phenomena form a massive magnetic tunnel that surrounds not only the Solar System but also other nearby star systems.

Known since the 60s

Lead astronomer Jennifer West notes that these two mysterious structures have been known since the 1960s. By the way, West says the team’s new research was inspired by an article published back in 1965. Radio astronomy was just beginning to develop at that time. The authors of the article were astronomers Matthewson and Milne, who based their research on rather crude, by modern standards, data.

However, even this crude data then suggested that polarized radio signals might look like a huge tunnel when we look at the Local Bubble (a region of rarefied hot gas in the interstellar medium inside the Orion Arm in our galaxy). Contemporaries did not accept the hypothesis, and over the years it was forgotten. In fact, astronomers have now tested a long-standing assumption using a set of new data accumulated by science over the past decades.

Nobody had linked the structures together

It’s also surprising, West said, that no previous analysis has linked the two structures together. In the new study, however, such a connection is revealed – it is described as some kind of radio loops that fill the space between two opposite ends of the sky and, probably, connect these two regions.

To check this or that, scientists have built a computer model that takes into account data from observations of ground-based telescopes. They then performed a simulation, creating a kind of “radio sky” invisible to the naked eye. This allowed them to see what the sky would look like if two opposite structures were connected by magnetic strands.

Scientists tested various parameters, which made it possible to study several scenarios and choose the most reliable one. As a result, the team concluded that the most likely distance from our solar system to these structures is about 350 light-years. And the total length of the magnetic tunnel, modeled by the team of researchers, is about 1000 light-years.

Consistent with other estimates

The authors of the work assure that the data they obtained are consistent with some other, more accurate estimates. As an example, they cite an estimate of the distance to the North Pole Spur, which was given earlier this year based on data from the Gaia Space Telescope. Those observations showed that almost all of this spur is located within 500 light-years. 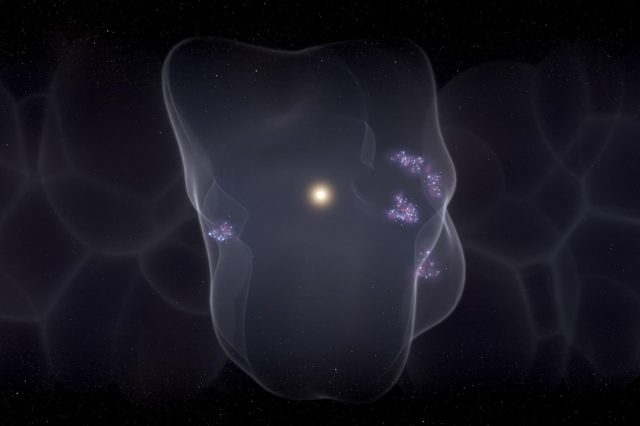 Researchers Find the Origin of Cosmic Neighborhood Surrounding Our World