There is a massive area of nothingness in the universe which has caused experts to scratch their heads.

Our universe is a strange place.

The more we explore it with our limited technology, the more we understand how much we have left to learn.

Despite this, we have made great progress in understanding our cosmos in recent years.

And along the way, we’ve encountered a few mysteries that could force us to rethink everything we thought possible. 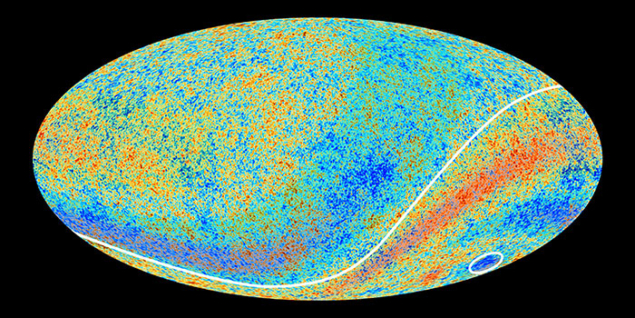 One such discovery a massive area of ‘nothingness’ that spans 1.8 Billion years across and located some 3 billion light-years away from our galaxy.

But not only is it big, but it is also incredibly cold as well, unlike its surrounding areas. The “Cold Spot” is approximately 70 µK (0.00007 K) colder than the average CMB temperature (approximately 2.7 K).

Scientists believe that the discovery of this massive sphere of nothingness could explain longstanding cosmological mysteries.

Some scientists believe that this ‘cold spot’ in space could be evidence of parallel universes. In fact, some have dared say that there could be BILLIONS of universes, just like ours, out there.

Until now, the most popular explanation has been that the mysterious cold spot is the result of a supervoid–Cosmic voids are vast spaces between filaments (the largest-scale structures in the universe), which contain very few or no galaxies.    Thus, this massive area of nothingness has been dubbed the Eridanus Supervoid

The Eridanus Supervoid could be the result of a collision between two universes.

Some scientists theorize that this cosmic mystery could be the first ever evidence of a multiverse and that our universe is just one of billions of other universes out there.

To understand the mysterious supervoid, we take a look at the Cosmic Microwave Background, commonly referred to by scientists as the CMB.

The Cosmic Microwave Background is a sort of map of radiation that was left over from the Big Bang.

This strange cosmic radiation was emitted not long after the Big Bang, a few hundred thousand after it.

The CMB provides scientists with the earliest view of our fledging universe and has become one of the most important components in studying the universe we live in.

The CMB Cold Spot, aka the Eridanus Supervoid, was discovered by astronomers in 2004 using data recorded by the Wilkinson Microwave Anisotropy Probe (WMAP).

Located in the Eridanus Constellation, there is a massive area that was much larger and cooler than should be possible according to standard cosmological models.

Scientists have long tried to explain the origin of this mysterious cold spot.

Progress in understanding it was made in 2015 when scientists came close to figuring it out as a study had shown it to be an actual “Supervoid” where the density of galaxies is much lower than it is in the rest of the universe.

But strangely, other studies haven’t managed to replicate the result.

Then, a survey of more than 7,000 galaxies concluded that a mysterious cold spot in the cosmic microwave background (CMB) is not caused by a giant void in space, potentially opening the door for more exotic explanations.

If we ask Laura Mersini-Houghton, a cosmologist, theoretical physicists, and a professor at the University of North Carolina at Chapel Hill, the mysterious cold spot un the universe is likely the imprint of another universe beyond our own, caused by quantum entanglement between universes before they were separated by cosmic inflation.

Laura Mersini-Houghton said, “Standard cosmology cannot explain such a giant cosmic hole” and made the remarkable hypothesis that the WMAP cold spot is “… the unmistakable imprint of another universe beyond the edge of our own.” If true, this provides the first empirical evidence for a parallel universe (though theoretical models of parallel universes existed previously).

A sophisticated computational analysis (made using Kolmogorov complexity) has provided scientific evidence for a north and a south cold spot in the satellite data: “…among the high randomness regions is the southern non-Gaussian anomaly, the Cold Spot, with a stratification expected for the voids. Existence of its counterpart, a Northern Cold Spot with almost identical randomness properties among other low-temperature regions is revealed.”

In other words, what the CMB Cold spot really is remain a profound mystery awaiting to be solved.