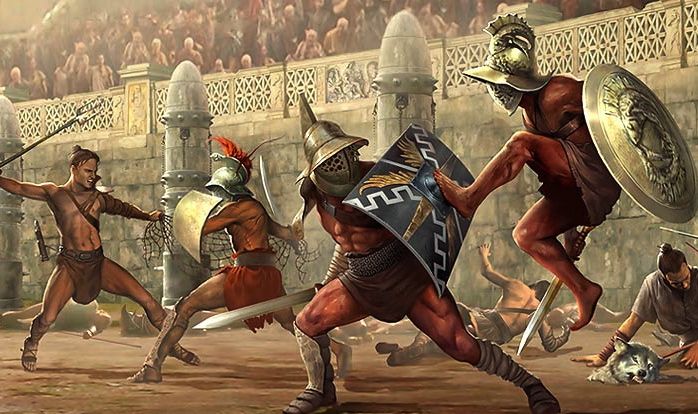 The contemporary understanding of Gladiators stands far from the truth about these brave warriors of the Ancient world. Did you know that there were numerous Gladiator classes?

Entertainment was a vital part of life in Ancient Rome and in most cases, the means of entertainment included violence and death. The most obvious example of such events was the Gladiator games that took place in each major city in the Roman Empire. The greatest of all fights took place in the Roman Colosseum.

Is there a person alive that has not seen the movie Gladiator or any of the similar movies about the Roman Empire? However thrilling and consuming they may be, such movies present us with a misleading representation of the real gladiator games that took place in the heart of Rome.

The Beginning of Gladiatorial Battles

Beginning in the 3rd century BC, Roman warriors believed that sacrificing prisoners in Gladiator games to commemorate their own death was a great symbol of honor.  Obviously, this sacrifice turned into a pastime, during which the prisoners of war went into battle to the point of death between them.

In the course of time, this practice spread to public life and became a grand entertainment.

Funerary Gladiator fights became so common that wealthy citizens began to set aside funds specifically for games to mark their own deaths in a memorable way. Those war prisoners who fell victim to funeral games were called asbustiarri.

Many emperors realized that the Roman mob loved the thrill of spectating a battle. Therefore, every ambitious politician at the time took advantage of this opportunity and sponsored fierce battles to increase his popularity.

Thus, the demand for these funeral battles increased to such an extent that it became public entertainment that brought fame, money, and influence. In less than two centuries, the gladiator games became one of the most lucrative businesses in the empire. Of course, even the emperors funded huge games involving hundreds of gladiators and animals that lasted for weeks.

The Men Underneath the Armor

The gladiatorial ranks were filled mainly through the capture of prisoners of war, although many of the future warriors in the arena were criminals from Rome itself. All but a few lucky ones were considered slaves.

There are also documented cases of free people who voluntarily participated in the games. Some of them were desperate men looking for direction in their lives, while others sought only adventure, challenge, and fame.

There was one thing they all shared – the desire for wealth or freedom.

No matter how the men got among the gladiators, the preparation for the fights went through hard and exhausting combat training in special gladiatorial schools, where most often the teachers were successful but retired gladiators. Eventually, there was an exit from the arena.

Elements and Variations of Gladiators and Games

Contemporary beliefs about gladiatorial battles are virtually straightforward and untrue.

When we think of these battles, we imagine two men wielding swords at each other, until one inflicts a powerful blow on the other and kills him. The movie “Gladiator” and the series “Spartacus” probably expanded the conception of many of us for this type of battles, including the way of training and combat. In reality, there were many variations of the gladiator battles and the fighters that took part in them.

Let’s look at some of the most famous types of gladiators:

Rеtіаrіuѕ – This type of fighters are often regarded as fishermen because they used a net, a trident, and a knife. These fighters rarely wore armor in order to be more mobile. Thus, they took advantage of the slow movements of their opponents to catch them with the net and stab them to death with their trident.

Myrmillonis – These fighters were similar to Retiarius due to the fact that their armor was decorated with fish elements. They were equipped with large shields and a sword.

Secutor – Otherwise known as pursuers, these fighters were among the favorites of the crowd as they presented them with a thrilling show. They were highly respected because they chased their opponents around the arena before killing them. As for their armor, they too had fish elements as decorations.

Galluѕ – Heavily armed gladiators, who relied on strong protection and sheer strength, at the expense of speed and agility. They took their name from the great Gallic Wars and fought with a traditional gladiatorial sword or with a spear.

Bestiarii – Technically, they were not real gladiators because they only fought animals. We can consider them like the predecessors of modern bullfighters with the minor difference that they fought lions, leopards, even elephants.

Eques – This was the name of the gladiators who fought on horses. They had the right to a spear while on horseback and a sword when on the ground. Their most distinctive feature was their helmet which usually had two feathers on each side.

Thrax – This is one of the most curious types of gladiators. They were armed as Thracian warriors who were one of the biggest enemies of Rome. These gladiators fought with small rectangular shields, a sword, and a helmet with a crest.

Essedarius – Those were the famous gladiators on chariots.