How did the ancient civilizations build such grand structures of multiton stones? How did they transport them from hundreds of miles away, and more importantly, how did they lift them high in the air to build their temples and monuments?

Thousands of years later, modern technology still does not have the capability of lifting such impossible weights. For example, let’s consider modern building cranes. The usual cranes you see in building sites around your city have a weight limit of 20 tons.

Of course, more advanced cranes can lift to 50 tons in weight, which are rare since modern buildings will rarely require such capabilities. Last but not least, few modern cranes can lift the magnifying 200 tons but let me tell you how rare they are today. There are only 2 of those cranes in the United States in total.

Knowing that, how could it be possible for the ancient builders to carry single stones with hundreds of tons of weight, sometimes even surpassing 1000 tons?

The Mysterious Ruins of Baalbek

Impressive and respectful, Baalbek was one of the largest cult centers in the Roman Empire. With its Roman temples, it is the largest and best-preserved ensemble of Roman architecture that exists to this day.

The Temple of Jupiter is one of the most impressive temples in Baalbek. It measures 88 × 48 meters and stands on a podium with a height of 13 meters above the surrounding terrain and 7 meters above the yard.

However magnificent the temple may have been, perhaps the Podium’s greatest architectural achievement, which was built with some of the heaviest stone blocks ever cut. Simply said, compared to them, the 200-ton blocks used in Giza look like small pieces of Lego.

As a start, the foundations were made of nine rows of stone blocks, each weighing over 300 tons. Above these blocks is the podium called “Trilithon” – a small group of three enormous stones that weigh about 800 tones each. And even with their incredible weight and size, they were so precisely placed next to each other that you cannot even place a needle in between them.

Besides the obvious question of how they transported such heavy stones is another more pressing matter – how did they lift them 7 meters above the ground?

Just ten minutes from the temple in an ancient quarry is the Stone of the South, also known as the Stone of the Pregnant Woman. The weight of this block is mind-boggling 1000 tons, although it was never transported to a monument.

A second ancient monolith was found nearby in the 90s, and surprisingly, it even surpasses the weight of the Stone of the Pregnant Woman. Archaeologists estimated its weight to more than 1200 tons. According to the archaeologists’ theories, the two stones were left in the quarry because their quality was not high enough to be transported without

And finally, 2014 was marked with the discovery of a third monolith stone in the quarry that is by far the heaviest ancient stone found in the world. The exact weight has not yet been calculated, but archaeologists estimated it to be between 1400 and 1650 tons.

Last but not least, we need to say a word or two about the temple’s origin and the blocks used for its building. Some popular theories suggest that all grand monuments originate from the time of the Romans. However, research has led to the belief that the stones were carved many thousands of years earlier by a lost ancient civilization. 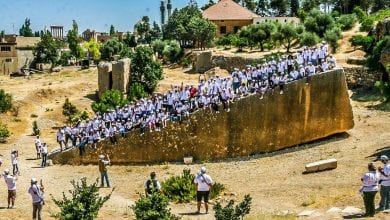 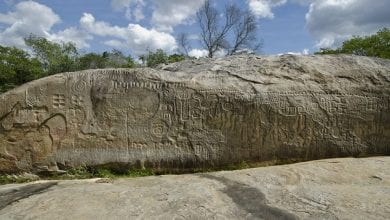