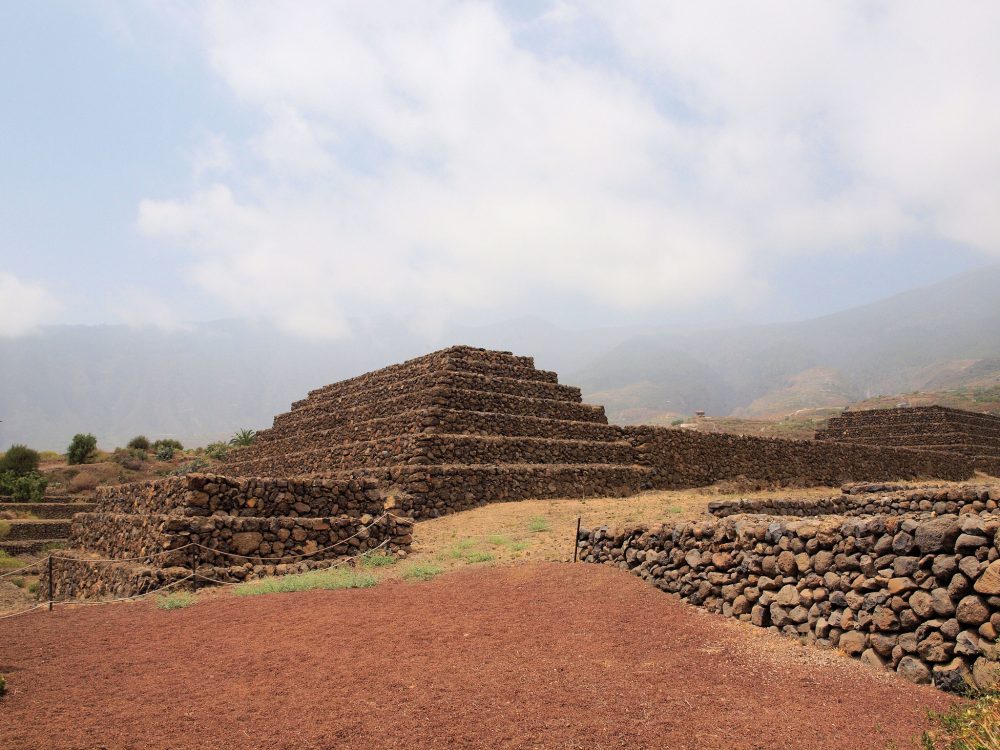 According to some, the pyramids of Tenerife were built by locals that simply needed to remove the stones from elsewhere. According to more exotic theories, the stone structures were built centuries ago by the aboriginal natives of the island.

In the southeast of Tenerife, there is a small town called Guimar, which has won worldwide fame thanks to the presence of a unique complex of structures – the pyramids of Guimar.

Although these structures are not as ancient as the Egyptian ones, an excursion to the Tenerife pyramids will turn out to be no less exciting and informative.

1. The Pyramids of Tenerife are six stone structures of volcanic rock, which are stacked in the form of steps without the use of a binder. The origin and purpose of these pyramids are still hotly debated by scientists.

2. Local old-timers say that there were a lot of such structures as the Guimar pyramids in Tenerife. This is also confirmed by some old images, but then many of them were dismantled and used for construction due to their uselessness. We know for sure that there were 9 of them initially but 3 of them, unfortunately, did not stand the test of time.

3. There are two most common versions of their origin. The main hypothesis is that the pyramids were “built” by local residents in the late 19th century, who, in the process of developing the new territory of the island, simply removed unnecessary stones from their path and put them into a kind of pyramid. This hypothesis has a large number of adherents, including among world-renowned scientists.

4. According to the well-known theory of Thor Heyerdahl about the continuity of cultures, the Canary Islands at one time were a place where multiple ships from different continents met, therefore the Guimar pyramids originally performed a religious function and were copied from similar Egyptian pyramids.

5. The technique of constructing the pyramids also raises questions. All of them are lined with rectangular-shaped volcanic stones, the upper platforms and each step are leveled and carefully graveled. The sites before the construction of each pyramid were carefully leveled, and the cornerstones of the pyramids were turned.

6. Thor Heyerdahl was the first to draw attention to the exact astronomical location of the pyramids of Tenerife. But what the meaning and cosmic purpose of these messages from the past is, is still a mystery to scientists.

7. On the day of the summer solstice, you can observe a “double-sunset” from the platform at the top of the largest pyramid.

8. In turn, the stairs located on the western side of the pyramids lead exactly to the rising sun on the morning of the winter solstice.

9. In addition, the Spanish pyramids are very similar in shape to the construction of the pyramids of Peru and Mexico.

10. One more interesting fact – from the writings of Pliny the Elder, you can learn that in his time (the 1st century AD), the Canary Islands were uninhabited, but there were ruins of large structures. Many theorize that the structures he mentioned were the same pyramids of Tenerife.