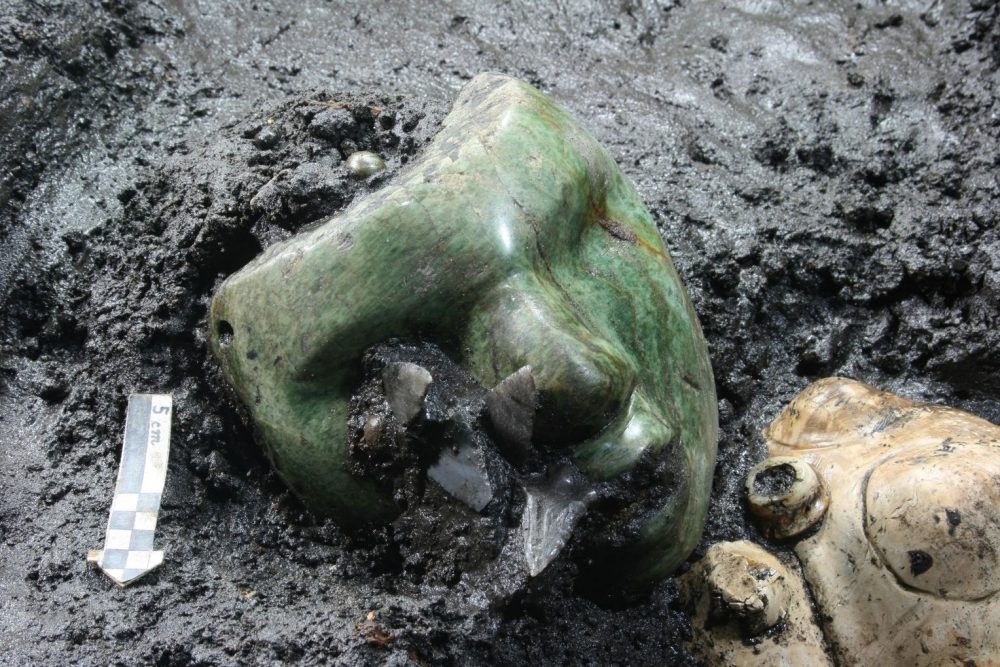 Rivers of liquid mercury beneath the pyramid, an underground world of tunnels, materials that are used today in electronics, and strangely carved masks are just some of the mysterious discoveries made beneath the ancient Pyramids at Teotihuacan.

Thousands of years ago, for reasons we are still unable to understand, cultures worldwide erected massive pyramids of all shapes and sizes.

Although the most famous pyramids are located in Egypt, many other pyramids exist around the globe that are equally stunning and majestic.

The most ancient pyramids, according to experts, are ancient monuments erected around 5,000 years ago in present-day Brazil.

A brief history of pyramids

These monuments, built by a culture we have yet to identify, were built at least 300 years before Egypt’s first pyramid, the Step Pyramid of Djoser.

Archaeological surveys suggest the Brazilian pyramids, for example, were built around 3,000 BC. The first pyramid of Egypt is thought to have been built around 2,700 BC.

The Pyramids of Egypt, on the other hand, are thought to have served exclusively and only as tombs for the kings of Ancient Egypt.

The most famous pyramid of Egypt is the Great Pyramid of Giza; an ancient monument believed to have been built around 4,500 years ago as the eternal resting place for Fourth Dynasty Pharaoh Khufu.

Mainstream Egyptologists argue the pyramid was built in no more than two decades. The builders managed to quarry, transport, and place more than 2.3 million blocks of stone, constructing a pyramid with a total weight of around 6.5 million tons.

Such was its size that, for a period of more than 3,800 years, the Great Pyramid of Khufu remained the tallest human-made structure built on the surface of the planet.

To find the largest pyramid on the planet’s surface, we need to look towards the American Continent, in present-day Mexico.

In the city of Puebla, not far from Mexico’s capital, stands an enormous pyramid ever built on the planet’s surface. However, despite being much larger than the pyramid of Khufu, the pyramid isn’t clearly visible. In fact, people could walk right next to it and not notice it is there.

That’s because the ancient pyramid was buried beneath thick layers of soil thousands of years ago.

In fact, when the Spanish Conquistadores made their way to the ancient city, they missed the pyramid completely. All they saw was a massive hill, atop which trees were already growing.

They saw the top of the hill as the perfect place to build a church, something they did without knowing that an ancient structure lay beneath.

The Great Pyramid of Cholula is the largest pyramid and the largest ancient monument ever constructed anywhere in the world. Although it is the largest, it isn’t the tallest structure. That honor belongs to the ancient pyramid of Khufu.

The Great Pyramid of Cholula, which in ancient times was called Tlachihualtepetl (Nahuatl for “made-by-hand mountain”), was most likely built in four distinct stages, the earliest of which probably began around the 3rd century BC. Its construction is believed to have lasted all the way through the ninth century AD.

Essentially, the massive pyramid is a kind of Step Pyramid with a base measuring 450 BC 450 meters, rising towards the sky at a total height of 66 meters. Such was the pyramid’s size that the ancient Aztecs thought it was built by Xelhua, one of the seven giants in Aztec mythology.

At its peak, the city of Cholula was home to the second-largest population in Mexico, with an estimated 100,000 people living in the area. The size of the city is only comparable to Teotihuacan.

Interestingly, more than one detail is shared between Teotihuacan and Cholula. Experts have revealed that the architectural building style at Cholula was closely linked to Teotihuacan, an ancient city shrouded in mystery, located in the Valley of Mexico.

The City of Gods

Of all the pyramids in America, none are as mesmerizing, perhaps as the pyramids of Teotihuacan. Scholars argue that his pre-Columbian city is home to the most architecturally singing fang pyramids built on the American Continent.

At its peak, the city is thought to have been home to more than 150,000 people. Experts suggest the city covered a total of eight square miles, and between 80 to 90 percent of the total population of the valley is belied to have called Teotihuacan their home.

Not much is known about the city since no ancient texts exist mentioning the foundation of the city have ever been found. Nonetheless, scientists argue that the city was probably established no earlier than 100 BC. However, experts agree that the history of the ancient city is as mysterious as its founders.

What we do know is that Teotihuacan was the largest urban center of Mesoamerica before the Aztecs, nearly one thousand years before their epoch.

By the time the Aztecs came to the city, Teotihuacan was already in ruins, overgrown by vegetation. In addition to the mysteries surrounding its foundation, experts have absolutely no idea of the city’s original name. Its present name was given to the city by the Nahuatl-speaking Aztecs around 550 CE.

The city’s name has been translated to “birthplace of the Gods” or “place where gods were born.”

The city of gods deserves majestic temples, and the ancient Teotihuacanos made sure to build such monuments.

Ancient Teotihuacan is home to three main pyramids: The Pyramid of the sun, the largest pyramid built in the city, the pyramid of the moon, and the temple of Quetzalcoatl.

The Pyramid of the Sun is the largest structure at Teotihuacan. The pyramid’s base measures 219.4 x 231.6 meters and a height of 65 meters; experts calculate the pyramid has a total volume of 1,184,828.3 cubic meters (41,841,817 cubic feet). Although called the Pyramid of the Sun today, we have absolutely no knowledge of its original name given to the monument by its initial builders.

Although many enigmas surround Teotihuacan and its pyramids, archaeologists have made progress in understanding the ancient city and its original founders.

One of the most notorious discoveries made at Teotihuacan was excavated at the base of the Pyramid of the Sun. More than five years ago, while exploring the tunnels beneath the pyramid, archaeologists recovered an intricate green serpentine mask.

The ancient artifact was so delicately carved that archeologists believe it may have been a portrait belonging to a royal citizen of Teotihuacan’s original inhabitants.

A far more mysterious discovery was made when experts analyzed Teotihuacan’s monuments and found these were decorated with large amounts of Mica. Mica is used in numerous electronic appliances because it is a superior insulator.

In total, experts have reported discovering more than 37 kilograms of Mica at Teotihuacan.

The mineral was found in the form of plates, triangles, trapezoidal figures, rectangles, squares, and circles and small fragments and dust.

In addition to the fact that many pyramids worldwide share a similar design, many pyramids were apparently built atop of underground tunnels, chambers, and even subterranean worlds.

The Step Pyramid of Djoser, for example, was built atop a massive underground world coving more than 5.7 kilometers in length.

The Great Pyramid of Cholula features around 8 kilometers of tunnels beneath it.

The Pyramid of the Sun at Teotihuacan shares this similarity.

According to experts, the Pyramid of the Sun was erected above a human-made tunnel that leads towards a cave, some six meters beneath the very center of the pyramid. Some have argued that this chamber beneath the pyramid is, in fact, a tomb, although evidence to support the claims has been inconclusive.

Despite the importance of the Pyramid of the Sun, experts have never managed to fully excavate and explore the interior of one of the largest and most enigmatic pyramids on Earth.

Nonetheless, excavations have been made, and stunning discoveries have been revealed to the world. The most striking discovery is that of a miniature mountainous landscape, some 20 meters below the surface, large quantities of liquid mercury. This is awfully strange since mercury is toxic and capable of devastating the human body through prolonged exposure. Furthermore, liquid mercury would have had no practical use for Teotihuacan’s inhabitants, which is why its discovery is perplexing.

Some experts have proposed that the large amounts of liquid mercury beneath the pyramid may have served a religious or artistic purpose.

Archaeologist Sergio Gómez has proposed that the liquid mercury may have symbolized an underworld river or lake thanks to liquid mercury’s reflective qualities.