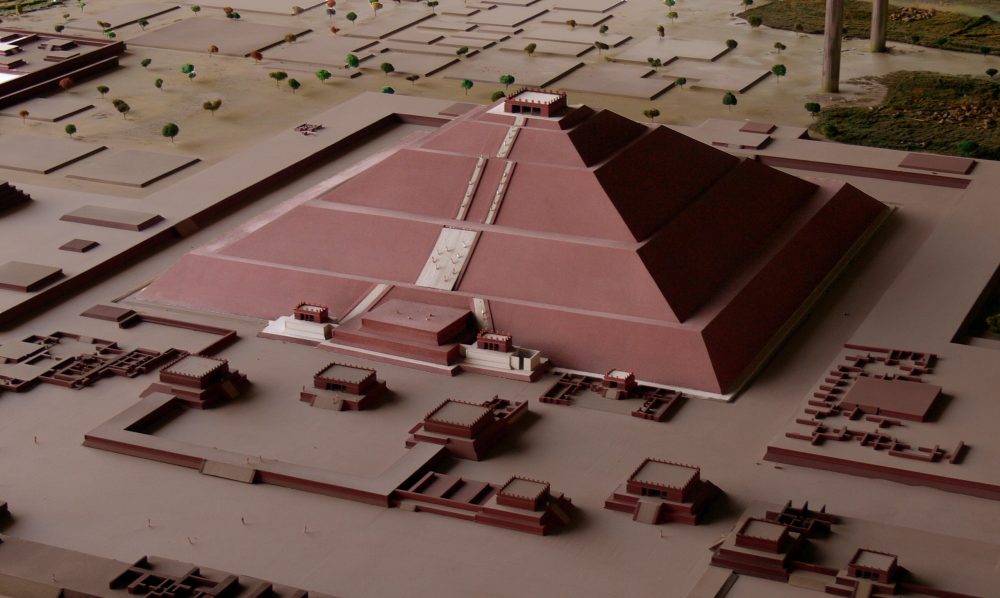 Some of the largest pyramids on the planet are also some of the most unknown.

The Egyptian pyramids are by far some of the most popular ancient structures on the planet’s surface. Leading the way is the Great Pyramid of Giza, an ancient monument thought to have been completed around 4,500 years ago, during the Fourth Dynasty reign of King Khufu.

Experts argue that the massive Pyramid—built with more than 2.3 million stone blocks—was intended to be the eternal resting place of the Pharaoh.

Although it is not the largest Pyramid on Earth, Giza’s Great Pyramid is certainly the tallest. When it was completed around 2580–2560 BC, it remained the tallest human-made structure on the surface of the planet for more than 3,800 years.

With a total weight of 6.5 million tons, the Pyramid of Khufu is a jewel of ancient architecture and Engineering. Thought to have been designed, planned, and built by Khufu’s Royal vizier and architect Hemiunu, Egyptologists estimate that Giza’s Great Pyramid was built in two decades.

Its completion marked the peak of the Egyptian pyramid building. However, the Egyptians went through numerous phases to build a structure like that, starting with Djoser’s Third Dynasty. During the reign of King Djoser, Egypt saw the birth of its first Pyramid, the Step Pyramid at Saqqara.

The Step Pyramid is thought to have been completed in no more than 19 years, and experts argue that the step pyramid was enlarged every three years until it became the recognizable six-step structure we see today. This was around 4,700 years ago.

However, halfway around the world, in Peru and Brazil, some 5,000 years ago, different ancient cultures erected pyramids.

It has been argued that the Brazilian pyramids, some of which are near the town of Jaguaruna in the Brazilian state of Santa Catalina, are the oldest on the planet.

The Egyptian pyramids were also built of material that ensured the structures would survive for thousands of years, retaining their original shape as much as possible. Evidence of that is the Pyramids at Saqqara, Dahshur, Giza, and other acceptable, although much smaller examples.

However, when experts analyzed the massive mounds, they discovered that the masse piles of trash were, in fact, square structures of pyramid design.

A Survey of various Brazilian pyramids more than twenty years ago revealed that some of these ancient monuments in South America were originally more than 160 ft high, with massive bases, some of which covered a total area of more than 37 acres.

In terms of volume, these pyramids were much larger than the earliest pyramids in Egypt and nearly as tall. It has been estimated that ancient cultures in brazil may have erected thousands of pyramids, some of which date back 5,000 years. The Step Pyramid of Djoser had a volume of 330,400 cubic meters (11,667,966 cu ft), and experts estimate the Brazilian pyramids were much larger.

Although thousands of these pyramids once decorated the Brazilian landscape, no more than 10 percent of pyramids exist in different states of preservation, and many of them have been destroyed.

This means that more than 5,000 years ago, cultures in Brazil were much more sophisticated than scientists initially believed and had the ability, logistics, and knowledge to build massive structures, some of which have survived the test of time.

In present-day Guatemala, not far from Brazil and hidden beneath the dense tropical rainforest, is a pyramid a few have heard about.

Constructed in the distant past, at the heart of the ancient Maya city of El Mirador (the lookout) is one of the most massive pyramids on the surface of the planet, known among experts as La Danta Temple.

When the large human-made platform that the temple is built upon (some 180,000 square meters) is included in calculations, La Danta is considered by many experts to be one of the most massive ancient structures in the world. In fact, this pyramid temple is so large that scholars have calculated that approximately 15 million man-days of labor were needed to complete the supermassive construction process.

Despite its massiveness, you’d probably miss La Danta if you walk near it because it is hidden beneath the dense Guatemalan rainforest.

It remains a profound mystery as to why ancient cultures saw the necessity of building such massive pyramids.

Not far from Mexico City, in present-day Puebla, is the world’s largest Pyramid. Dubbed by experts the Great Pyramid of Cholula, this massive monument was known in ancient times as Tlachihualtepetl (Nahuatl for “made-by-hand mountain”).

Standing at around 55 meters in height, the Great Pyramid of Cholula measured 450 by 450 meters (1,480 by 1,480 ft) in its final form. Its base is of behemoth size: experts have calculated it covers a total area of more than 160,000 square meters, which means it is three times bigger than the 53,056.5 square meter base of Giza’s Great Pyramid.

As noted by the Guinness Book of Records, Tlachihualtepetl is, in fact, the largest Pyramid on Earth but also the largest monument ever constructed anywhere on the surface of the planet.

The base of the Great Pyramid of Cholula has been calculated at around 18.2 ha (45 acres).

Curiously some of the largest pyramids in Brazil covered an area of around 37 acres.

This means that we have some of the most massive pyramids ever constructed in Brazil, with some structures covering an area of nearly 40 acres. La Danta is one of the largest pyramids on Earth, with a total volume of 2,800,000 cubic meters. The largest of all pyramids, the Great Pyramid of Cholula, is unlike any other pyramid ever built on the planet’s surface, with a total volume calculated at more than 4.45 million cubic meters.

However, a fourth pyramid (an extra) is worth mentioning, not only because of its size but because of its history, the Pyramid of the Sun at Teotihuacan. With a total volume of 1,184,828.3 cubic meters (41,841,817 cubic feet), standing 65.5 meters (216 feet) high, experts have no historical records mentioning who and when this Pyramid was built.