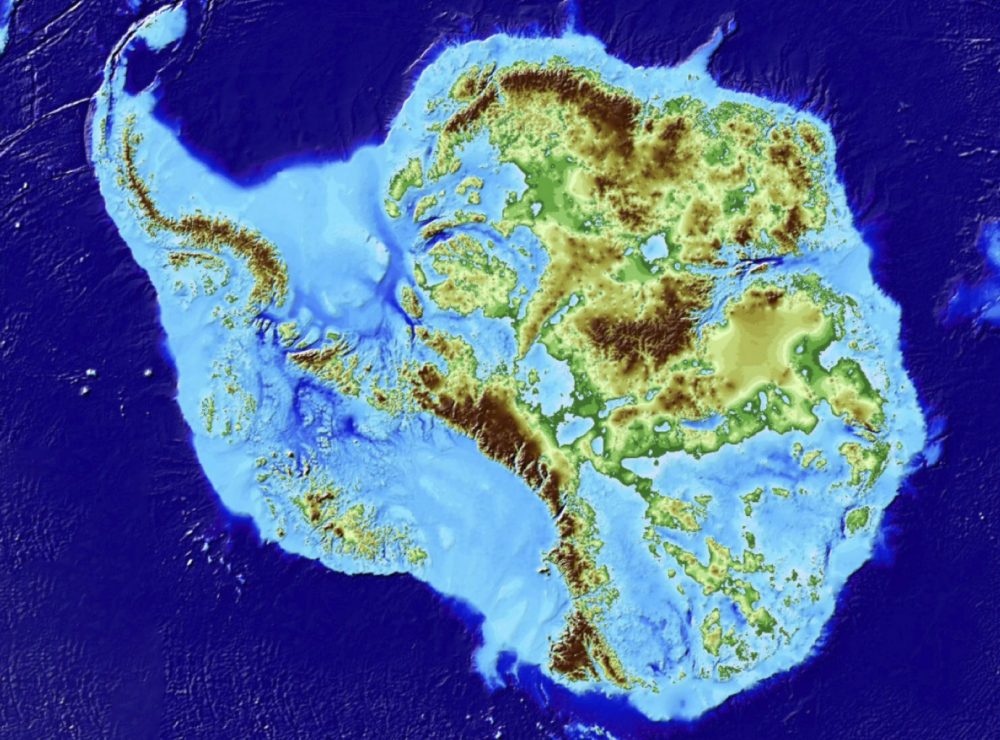 Have you ever wanted to see what Antarctica looks like beneath all the snow and ice? Well, here is your chance.

A new map made of data from radar, imaging, and predictions has revealed Antarctica’s unprecedented view.

Not only has the new map revealed what Antarctica looks like beneath the ice, but experts have also discovered the deepest point on land.

A team of glaciologists led by Irvine, from the University of California, in the United States, has revealed the most accurate portrait of the contours of the landmass below the Antarctic ice sheet, and in doing so, they have helped identify which regions of the continent will be more or less vulnerable to future climate warming. Antarctica’s topographic map, dubbed ‘BedMachine,’ was published in the journal ‘Nature Geoscience.’

Among the most surprising results of the ‘BedMachine’ project are the discovery of stabilizing ridges that protect the ice that flows through the Transantarctic mountains; a bed geometry that increases the risk of rapid ice melting in the Thwaites and Pine Island glaciers sector of West Antarctica, and a bed under the glaciers of the Support Force Glacier that is hundreds of meters deeper than previously thought, making those ice sheets more susceptible to withdrawal, and the deepest land canyon in the world beneath the Denman glacier, in Eastern Antarctica.

The experts have revealed that the new data has unveiled many surprises in Antarctica, especially in regions that have previously not been mapped in great detail.

To get even better readings, the scientists behind the ‘BedMachine’ project used measurements of the bathymetry of the ice shelf of the NASAs Operation IceBridge campaigns and the data of the speed of the ice flow and the seismic information, where it was available.

These same data sets have been used in other topography mapping projects, producing similar results when viewed broadly.

Scientists have revealed that BedMachine data allows experts to understand particular parts of Antarctica better. The new map of Antarctica has allowed experts to discover the deepest point on land.

Previous mapping methods in Antarctica that rely on radar surveys have been usually effective, with some restrictions. While the airplanes fly in a straight line over a region, the radar systems mounted on the wings emit a signal that penetrates the glaciers and the ice sheets and bounces from the point where the ice meets the mainland.

Glaciologists then use interpolation techniques to fill the areas between the runways, but this has proven to be an incomplete approach, especially with rapidly flowing glaciers.

In other words, in an ever-changing environment such as Antarctica, this technique can’t be relied upon.

This is where BedMachine is a game-changer.

‘BedMachine’ relies on a fundamental physics-based method of mass conservation to discern what is located between radar survey lines, using highly detailed information on the movement of the ice flow that dictates how ice moves around varied contours of the bed.

This technique was instrumental in the research team’s conclusion regarding the true depth of the Denman channel, for example.

Previous maps showed a canyon thought to be far less deep, but this was wrong.

With conservation of the mass, by combining the existing radar study and the ice movement data, scientists were able to find out how much ice the canyon fills, which, according to calculations, is 3,500 meters below sea level, the deepest point on land. Since it is relatively narrow, it must be deep to allow so much ice mass to reach the coast.

By basing its results on the ice surface speed in addition to the ice thickness data of the radar surveys, ‘BedMachine’ can present a more accurate and high-resolution representation of the topography.

“The same method has been successfully used in Greenland in recent years, transforming the understanding of ice dynamics, ocean circulation, and the mechanisms of glacier retreat,”  revealed Professor Mathieu Morlighem, the lead author of the study.

Scientists hope that using BedMachine will allow them to reduce the uncertainty in sea level rise projections and understand the continent in ways previously impossible.