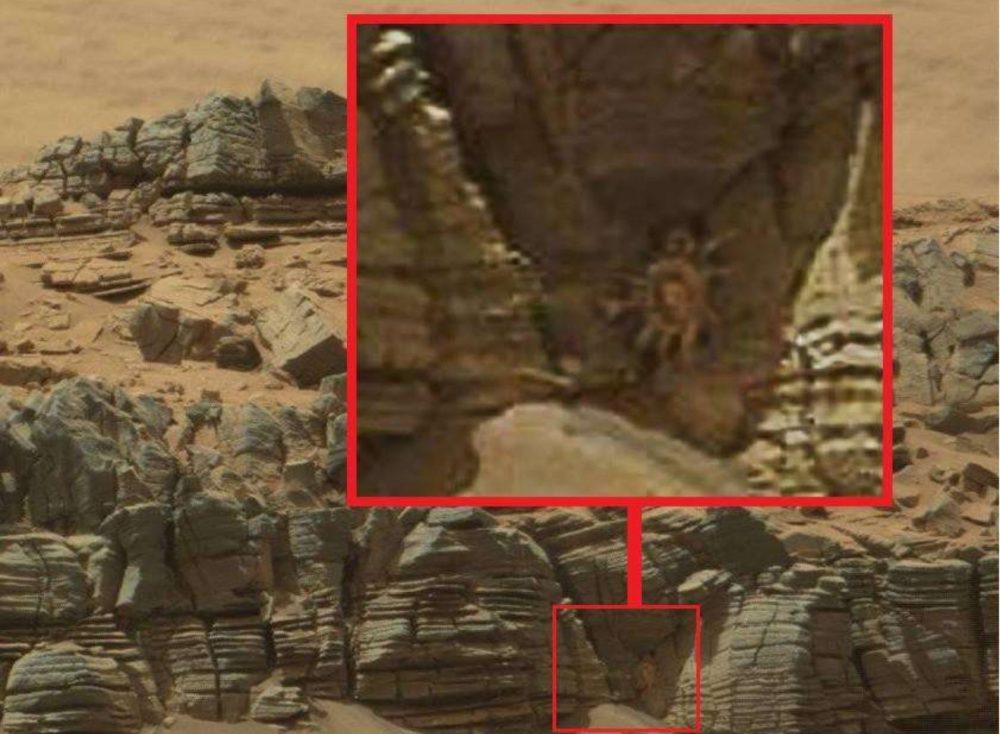 An Ohio University Emeritus Professor analyzed countless images from Mars and says that "there has been and still is life on Mars." Some of these life forms are clearly visible in the images beamed back from the red planet.

Update: The article on the website of Ohio University was deleted, although the scientific paper where Professor Romoser presented his claims can be found here. The original featured image can be accessed by visiting this link: https://mars.nasa.gov/msl-raw-images/msss/00710/mcam/0710MR0030150070402501E01_DXXX.jpg

The Emeritus professor revealed that some of the images seem to show insect-like and reptile-like forms, appearing to verify that life exists on Mars, according to a statement from the University of Ohio.

The Ohio entomologist argues that we already have more than enough evidence to confirm that there is life on Mars, and we can thank NASA’s rovers on the red planet.

He revealed that during his search, he encountered evidence of a number of insect-like lifeforms which appear to be similar to bees. He also claims to have found reptile-like forms, both as fossils and living creatures.

His discoveries were presented at the National Meeting of the Entomological Society of America in St. Louis Missouri.

“There has been and still is life on Mars,” Romoser explained in an article now deleted by Ohio University, adding that the images appear to show both fossilized and living creatures.

“There is apparent diversity among the Martian insect-like fauna which display many features similar to Terran insects that are interpreted as advanced groups – for example, the presence of wings, wing flexion, agile gliding/flight, and variously structured leg elements.”

Although scientists still argue they have not found conclusive evidence of life on Mars, Professor Dr. Romoser say that NASA’s rovers, particularly Curiosity, have taken a number of photographs of the Martian surface “where arthropod body segments, along with legs, antennae, and wings, can be picked out from the surrounding area.”

One of the images even appears to show insects in a steep dive, just before pulling up, avoiding hitting the ground.

Dr. Romoser revealed that the images of mars were carefully studied while altering photographic parameters such as brightness, contrast, saturation, inversion, and so on.

The researcher argues that no content was added or removed from the images, and they were published in the study in the same way.

In order to find anomalies on Mars, Dr. Romoser used the following criteria: “Dramatic departure from the surroundings, clarity of form, body symmetry, segmentation of body parts, repeating form, skeletal remains, and observation of forms in close proximity to one another. Particular postures, evidence of motion, flight, apparent interaction as suggested by relative positions, and shiny eyes were taken to be consistent with the presence of living forms.”

The Ohio University entomologist further explains that distinct flight patterns are evident in many of the images from Mars. The creatures he believes to have identified resemble bumblebees as well as carpenter bees similar to the creatures we have here on Earth.

Some of the images from Mars even seem to show the insects leaving their shelters or nests in caves. The expert claims that there are images that also show fossilized creatures resembling snakes.

“Once a clear image of a given form was identified and described, it was useful in facilitating recognition of other less clear, but nonetheless valid, images of the same basic form,” Romoser revealed.

These characteristics should likewise be valid to identify an organism on Mars as insect-like. On these bases, arthropodan, insect-like forms can be seen in the Mars rover photos,” the entomologist added.

UFO hunters and Alien enthusiasts have combed through the countless images taken on Mars in search of alien evidence. Some of them are actually pretty convincing, like this example here.

In addition to alien hunters, scientists have also made claims about Mars telling us there really is life there.

One example is Gilbert V. Levin, who was the principal investigator of an experiment on NASA’s Viking mission to Mars. Mr. Levin argues that NASA found evidence of alien life on Mars back in the 1970s.

You can read the paper here. And you can find articles that remain online here, here, and here.