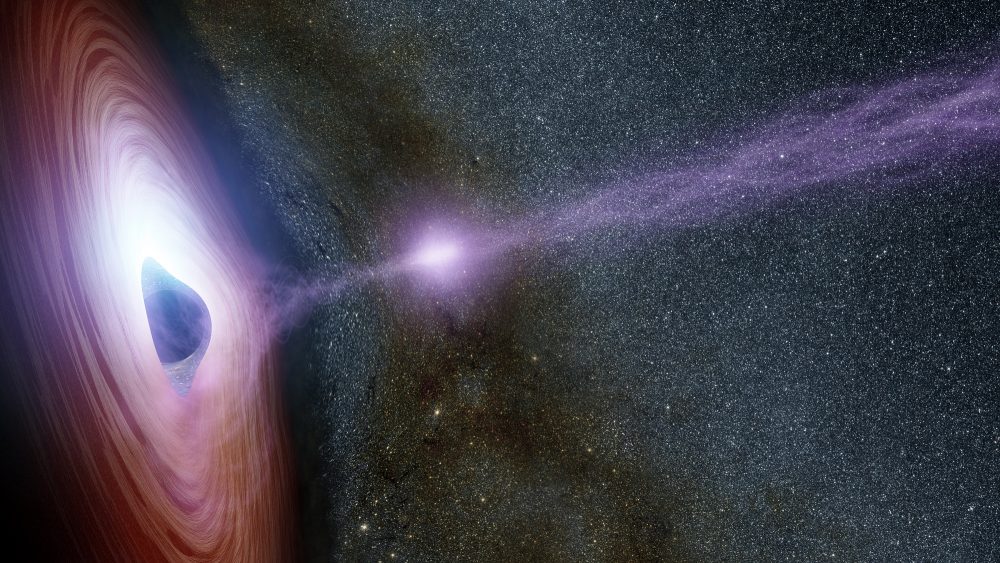 Astronomers have caught a black hole hurling hot material into space at nearly the speed of light.

10,000 light-years away, there’s a black hole and a companion star. Together, these two comic objects are from the so-called MAXI J1820 + 070 system. This specific black hole was observed by NASA’s Chandra x-ray telescope, which spotted hot matter exiting the black hole at nearly the speed of light.

X-ray observations with NASA’s Chandra Space Telescope have captured a black hole on video, launching hot material into space at nearly the speed of light.

According to astronomers, the black hole in the MAXI J1820 + 070 system has a mass about eight times greater than that of the sun, making it a so-called stellar-mass black hole formed by the destruction of a massive star. This is in contrast to supermassive black holes that contain millions or billions of times the mass of the sun.

While some of the hot gas in the disk will cross the “event horizon” (the point of no return) and fall within the black hole, some of it is ejected from the black hole in a couple of short beams of jets. These jets point in opposite directions launched from outside the event horizon along magnetic field lines.

The new footage of this black hole’s behavior is based on Chandra’s four observations in November 2018 and February, May, and June 2019. It is reported in a study led by Mathilde Espinasse of the University of Paris, published in The Astrophysical Journal Letters.

The below video by NASA shows what the telescope spotted.

The image below shows a large optical and infrared image of the Milky Way galaxy from the PanSTARRS optical telescope in Hawaii, with MAXI J1820 + 070 on the plane the galaxy marked by a cross. Inset shows a film that runs through Chandra’s four observations, where “day 0” corresponds to the first observation on November 13, 2018, approximately four months after the jet was launched.

MAXI J1820 + 070 is the bright X-ray source in the center of the image, and X-ray sources can be seen moving away from the black hole in jets north and south. MAXI J1820 + 070 is an X-ray point source, although it appears larger than a point source because it is much brighter than jet sources. The southern jet is too weak to be detected in observations from May and June 2019.

This is an example of a phenomenon called superluminal motion, which occurs when something travels towards us near the speed of light, in a direction close to our line of sight. This means that the object travels almost as fast toward us as the light it generates, giving the illusion that the jet’s movement is faster than the speed of light.

In the case of MAXI J1820 + 070, the south jet is pointing towards us, and the north jet is pointing away from us, so the southern plane seems to move faster than the north. According to Chandra, only two other examples of such high-speed X-ray ejections of stellar-mass black holes have been posted so far.