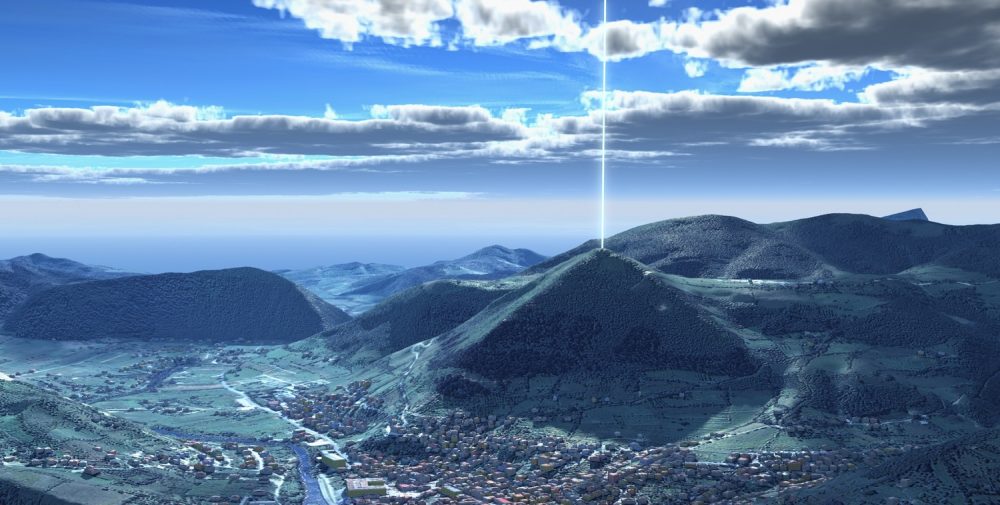 I visited the pyramids a few years ago, and spoke with Dr. Osmanagic inside the tunnels. It was a fascinating experience.

The man behind their discovery claims the Bosnian Pyramids are the largest and oldest of them all but are they?

It’s as if in the distant past, nearly all ancient civilizations decided to build these massive structures reaching the skies.

Despite being unconnected and separated by thousands of kilometers and different continents, some of these structures turned out to be very similar.

I call it Pyramidomania, and it is a phenomenon that took over the ancient world.

Speaking about pyramids, there’s a debate as to where the largest pyramid in the world is located.

Officially speaking, it’s the Great Pyramid of Cholula, located in the state of Puebla in Mexico. The Great Pyramid of Cholula, also known as Tlachihualtepetl, which means “made-by-hand mountain” in the Nahuatl language, is according to the Guinness Book of World Records, the largest pyramid in the world. It stands around 55 meters above the surrounding area and measures 450 by 450 meters.

Its a monster of a pyramid, and it’s hidden beneath a hill.

But is it really the largest of them all?

A behemoth of a pyramid

According to numerous authors, the world’s largest Pyramid is not located in Mexico but Europe.

In 2005, Dr. Semir Osmanagic discovered what he argues is the largest and oldest pyramid in the world. In addition to that, the Pyramids are supposedly around 30,000 years old.

Named the Pyramid of the Sun, the Bosnian Pyramid is a towering structure is which supposedly is the largest Pyramid of them all.

But experts disagree. In fact, the European Association of Archaeologists has condemned the  ‘Bosnian pyramids Complex’ as a “cruel hoax.”

Mainstream archaeologists claim that the Pyramids are nothing but natural hills known as flatirons and that excavating the area where the pyramids are located poses a risk to genuine archeological sites such as a medieval Bosnian capital, Roman fortifications, and some even more ancient remains.

Despite this, Osmanagic has not succumbed to mainstream pressure and continues his project in excavating the pyramid complex using private funding.

The Bosnian Pyramids and their composition

Those who have participated in excavations at the site in Visoko argue that once you remove the layers of vegetation, you will find layers and layers of human-made concrete that make up the pyramids in the Bosnian Valley of Pyramids.

The Pyramids of Bosnia, the largest of which is the Pyramid of the Sun, is believed to be one third taller than the Great Pyramid at the Giza plateau.

The Bosnian Pyramids are supposedly made of as many as five thick layers of concrete, and each of those layers has an additional fifteen centimeters of clay in between.

Beneath the concrete and the clay, the interior parts of the pyramid are made of sandstone blocks.

As noted by the Sarajevo Times, the sandstone blocks at the Pyramids in Visoko show a number of different types of rocks like sandy quartz limestone.

The material is thought to have originated from a locally deposited post-glacial conglomerate.

It has also been claimed that during the manufacturing process, and based on analysis of the rocks, the materials were somehow heated to temperatures around 500 degrees Celsius.

Furthermore, as noted by the Sarajevo Times, studies performed by the University of Paris show that the concrete used in constructing the Bosnian Pyramids is around five times stronger than modern-day concrete.

The concrete used in the construction of the Bosnian Pyramids is, in addition to not being of natural origin, stronger and more water-resistant than any other known material.

Tunnels beneath the Pyramids

Dubbed the Ravne Tunnels, Semir Osmanagic argues that beneath the Pyramid complex is an intricate tunnel system connecting the pyramids.

Inside these tunnels, it was claimed that there are cryptic markings that could even point to a long-lost language, older than Sumerian.

The entrance to the tunnels is located around 2.5 kilometers from the Bosnian Pyramid of the Sun.

Materials discovered inside the tunnels point to incredible dates. As noted by the Pyramid Complex website, organic materials tested through radiocarbon dating in Poland, Germany, and Sweden show that the tunnels were built in the conglomerate, which formed around 32,000 years ago.

Healing Energy of the Bosnian Pyramids?

It has also been claimed that the complex tunnels beneath the PYramids at Visoko are home to beneficial electromagnetism that has been well-measured in the past.

Experts also detected an extremely high concentration of negative ions, up to 60,000 per cubic centimeters.

There is an absence of harmful cosmic rays as well as natural radioactivity in the tunnels.

The tunnels supposedly feature an ultrasound of 28 kHz and the Schumann resonance of 7.83 Hz, which has been claimed to be the best energy for spiritual, physical, and mental health.

The Controversy behind the Bosnian Pyramids

And while all of the above sounds terrific, the mainstream archaeological community is strongly opposing the project led by Osmanagic.

Their main claims are that there’s nothing there (in terms of Pyramids) and that his excavations in the area can dagame known archeological sites around the hills.

The European Association of Archeology has deemed the project led by Osmanagic a pseudoarchaeological hoax, claiming that the pyramids Osmangic speaks of are non-existent.

A letter issued by seven leading European archaeologists declares the following regarding the Pyramids Osmanagic found:

We, the undersigned professional archaeologists from all parts of Europe, wish to protest strongly at the continuing support by the Bosnian authorities for the so-called “pyramid” project being conducted on hills at and near Visoko. This scheme is a cruel hoax on an unsuspecting public and has no place in the world of genuine science. It is a waste of scarce resources that would be much better used in protecting the genuine archaeological heritage and is diverting attention from the pressing problems that are affecting professional archaeologists in Bosnia-Herzegovina on a daily basis.

After having visited the pyramids several years ago and having spoken with Dr. Osmanagic, who kindly explained the discoveries made, I certainly believe there is more to the mysterious structures than a pseudoscientific hoax.

You can feel a different kind of energy while inside the tunnels. You can feel these structures are more than hills.