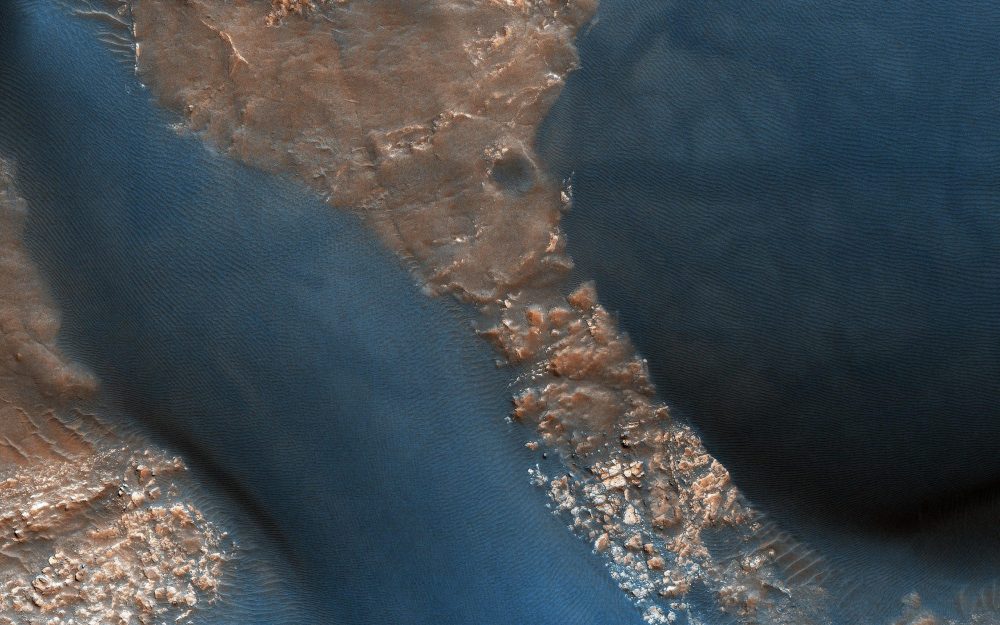 Thanks to the MARSIS radar of the ESA Mars Express orbiter, a team led by Sebastian Emanuel Lauro and Elena Pettinelli of the University of Roma Tre has confirmed the presence of a complex system of saltwater lakes under the South Martian pole cap. Roberto Orosei.

The discovery of the underground, saltwater lakes is a big deal, and experts say that these bodies of water “could still retain traces of any forms of life to this day.”

The discovery deepens our understanding of the red planet and helps us better understand what mars were like in the distant past and what the red planet is like today. As it turns out, Mars is a hidden gem, and its most important features are located beneath the surface, hidden from ordinary sight. However, satellite images from various space agencies are helping reveal the hidden jewels of the red planet.

When I say jewels, I mean water. In 2018, a large lake of liquid water 20 kilometers in diameter was discovered under the icy surface of the south pole of Mars.

On Mars, water is gold.

New research has confirmed the lake’s existence and found three more, which means that there is much more water on Mars than we initially thought.

“Not only did we confirm the position, extent, and strength of the reflector from our 2018 study”, co-lead author Elena Pettinelli (Roma Tre University) said, “but we found three new bright areas.”

“Smaller bodies of liquid water surround the main lake, but because of the technical characteristics of the radar and its distance from the Martian surface, we cannot conclusively determine whether they are interconnected,” he added.

More importantly, scientists argue that the recently-uncovered lakes remain liquid despite extreme cold as they are hypersaline solutions (hypersaline perchlorate brines). As a result, high concentrations of salts are dissolved in water.

As revealed by researchers, the average temperature at the Martian pole varies at around -110 ° C. But despite this freezing temperature, the water is believed to remind in a liquid state because salts can reduce the freezing point of water by tens of degrees

“These experiments have demonstrated that brines can persist for geologically significant periods even at the temperatures typical of the Martian polar regions (considerably below the freezing temperature of pure water),” explained co-author Graziella Caprarelli.

“Therefore, we think that any process of formation and persistence of sub-ice water beneath the polar ice caps requires the liquid to have high salinity,” the researchers explained to scimex.

More importantly, the lakes’ discovery helps us better understand the geological history of Mars and how long the planet may have remained “habitable” both above and beneath the surface.

Whether Mars is habitable today—if it is home to microbes—is something NASA‘s Perseverance rover hopes to answer. The rover—and the first Martian helicopter—are set to touch down on the red planet’s surface in February 2021.

Nonetheless, the recent discovery contributes to our hopes that the red planet is habitable. Only recently have we learned that, based on observations of Venus’s atmosphere, there could be organisms there as well. Why wouldn’t Mars also be home to microbial life if this is true? Subsurface conditions on Mars could be the ideal hiding spot for life.

Researchers say that the existence of a single subglacial lake on Mars could be attributed to “exceptional conditions” such as the existence of a subsurface volcano. However, discovering a network of underground lakes suggests that their formation process is much more common than initially thought.

More importantly, if such lakes are common and extensive, it would imply that they existed for much of the red planet’s history, which in turn means that there was probably enough time for life to emerge.

The recent study published in nature also tells us we need to look at Mars from a different perspective and that the planet’s ice sheets are not uniformly structured wastelands. Instead, it should be seen as “stratigraphically and physically complex geological formations, deserving to be fully explored in detail.”