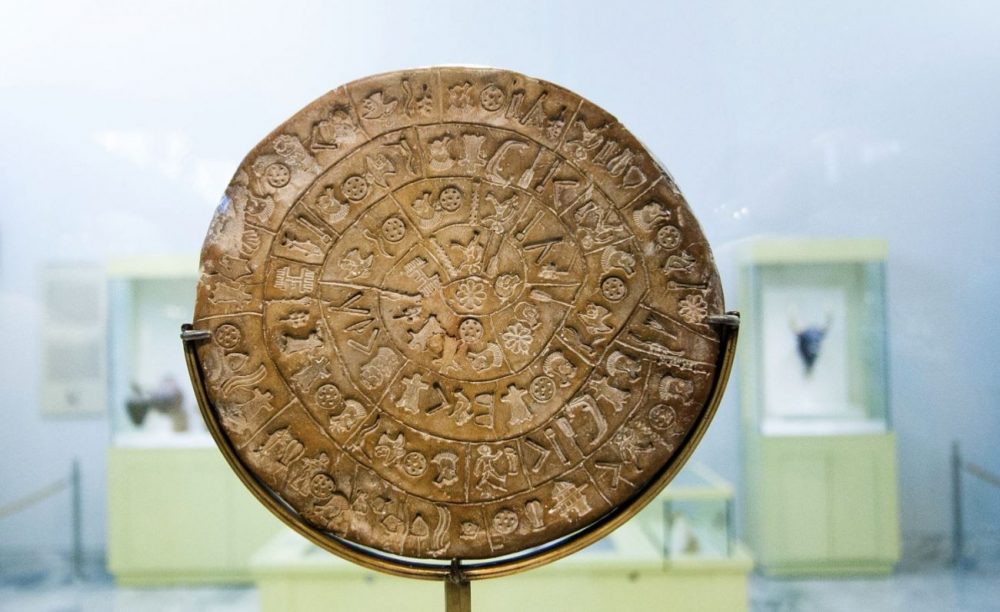 The so-called Phaistos disc is a circular clay artifact recovered from the Minoan palace of Phaistos on the island of Crete in 1908, by archaeologist Luigi Pernier.

Most scholars agree that the disc dates to the middle or late Minoan Bronze Age (second millennium BC).

It features 241 tokens, made of 45 distinct signs, which were made by pressing hieroglyphic “seals” into a disc of soft clay, in a clockwise sequence spiraling toward the center of the disc.

As noted by researchers, there is evidence of ‘corrections’ made on the surface of the disc.

The Phaistos dis is imprinted on both sides. The disc measures 15 centimeters in diameter.

The exact purpose, meanings as well as its original geographical place of manufacture, remain a mystery, reason why the Phaistos disc is one of the most famous archeological mysteries on Earth.

The artifact is housed at archaeological museum of Heraklion, and most scholars argue that given its indecipherable message, it was crafted by a mysterious people, written in a lost language.

Professional archaeologists and code breakers have attempted to solve the mystery behind it by deciphering its message. And while many attempts were made to reveal its message, the Phaistos Disc has still not given up its secrets.

In fact, many scholars aren’t even sure where the strange symbols etched on its surface are even a script.

Nonetheless, most attempted decipherments have come to the conclusion it probably is either a syllabary, an alphabet or logography.

Most experts lean towards a syllabary, based on the proportion of 45 symbols in a text of 241 tokens typical for that type of script.

Because of the countless mysteries surrounding the artifact, many scholars have proposed in the past that the disc is a forgery and a hoax.

Despite these suggestions, archeologists generally accept the disc as a genuine, archaeological artifact.

This assumption has been supported by the discovery of another artifact, the so-called Arkalochori Axe which bears similar but not identical glyphs on its surface.

Jared Diamond, author of ‘Guns, Germs, and Steel’ argues that the Phaistos Disc is an example of a technological advancement that didn’t become widespread in ancient time, because it was produced at the wrong time in history, and contrasts with the Gutenberg’s printing press.

Several researchers including German typesetter and linguist Herbert Brekle as well as Benjamin Schwartz believe the Phaistos Disc is an early document of movable type printing as it meets the essential criterion of typographic printing.

Yves Duhoux a Belgian classical philologist, linguist, and mycologist dates the disc to between 1850 BC and 1600 BC, based on Luigi Pernier’s report, which suggests that the Phaistos Disc was in a Middle Minoan undisturbed context.

Louis Godart argues that in an archaeological context, the Phaistos Disc may be anywhere in Middle or Late Minoan times

Most scholars argue that in order to understand the secrets of the Phaistos Disk, “a thermoluminescence test for the Phaistos Disc is imperative. It will either confirm that new finds are worth hunting for, or it will stop scholars from wasting their effort.”