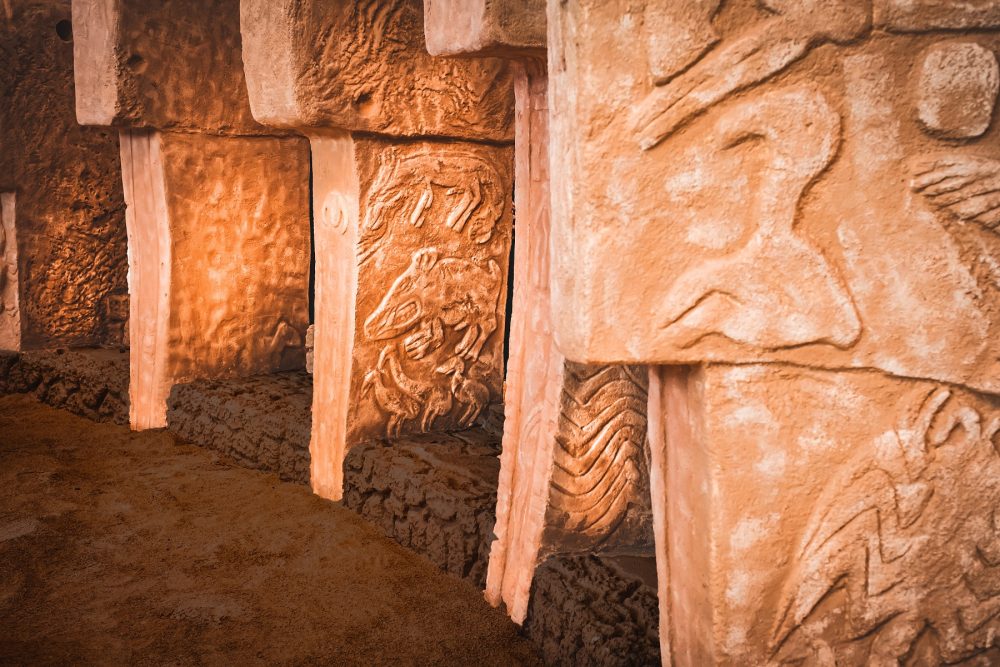 The ancient monument which was built more than 12,000 years ago was erected by an unknown culture which may have witnessed (and probably survived) a cataclysmic cosmic event around 10,000 BC.

Around 12,000 Years ago, a mysterious people in what is now Turkey erected multi-ton stones into intricate circles forming what is now considered the oldest temple on the planet’s surface. Its not just old, its ancient. In fact, the ancient temple known as Göbekli Tepe—which means Potbelly Hill—was built around the 10th millennium BC; this means that it predates the oldest of Egyptian pyramids by at least 7,300 years.

The archaeological site of Göbekli Tepe is located in what is now Turkey’s Southeastern Anatolia region. Located some 12 kilometers (7 miles) from Sanliurfa, the most ancient temple remains hidden beneath the surface, covered by an artificial mound rising now more than 15 meters into the air.

Precisely there, at a time when history was not recorded, an ancient group of people—unknown to history—erected more than 200 intricate pillars in 20 circles that have so far been identified through geophysical surveys.

Each of the pillars at the site is massive, rising at least six meters (some 20 feet) into the air. However, the most curious characteristic is the pillars’ weight; experts have revealed that each pillar weighs up to 10 tons.

How exactly an ancient group of people quarried, transported, and put into position such massive stones more than 12,000 years ago remains a profound mystery. According to historians, the even greater mystery is that no more than local hunter-gatherers built a site of such complexity. However, the complexity, design, and size of Göbekli Tepe point to the possibility that the site was built by a civilization that may have disappeared during the last global cataclysm.

The site itself is extraordinary, but even more is the mysterious aura in which the entire site is shrouded. Each of the megalithic pillars at Göbekli Tepe was fitted into sockets that were apparently hewn out of the bedrock.

The second phase, which experts say belongs to the Pre-Pottery Neolithic B (PPNB), is where the builders erected pillars that stood in rectangular rooms with polished lime floors.

For reasons we still don’t know, the entire site was abandoned and buried after the Pre-Pottery Neolithic B (PPNB). Younger structures date to classical times. As revealed by carbon dating, for reasons that continue to elude experts, the site’s enclosures were purposely backfilled sometime during the Stone Age.

Although the entire site is acknowledged as a kind of ancient temple where different religious and ritualistic activities were performed, we can’t say for certain what the structure’s exact function was since there are no written records found anywhere that refer to the site. Nonetheless, we know Göbekli Tepe was of great importance thanks to its vast size and much smaller, although similar, temples found 9in the vicinity, which seems to point to the possibility that Göbekli Tepe served as a kind of “central temple.”

Göbekli Tepe is a treasure trove of history. Its imposing stratigraphy attests to countless centuries of activity, the earliest of which dates back more than 12,000 years.

The site is divided into three layers according to the age of the structures. Layer three denotes the earliest parts of the history of Göbekli Tepe, and it is when we see the appearance of circular compounds at the site ranging anywhere from 10 to 30 meters in diameter. The most notable feature of Layer III is the massive T-shaped limestone pillars, which were accurately set within massive interior walls.

So far, archeological excavations have revealed four such structures, although surveys of the site indicate at least 16 other similar structures still beneath the surface. Each of the structures is believed to feature around eight pillars, which would suggest a total of 200 pillars at Göbekli Tepe alone.

Most of the massive rocks were transported from nearby quarries, some of which are no more than a few hundred meters away from the hilltop to where the stones now stand. The builders constructed two taller pillars facing one another at the center of each of the circles at Göbekli Tepe. Some experts have suggested that the circles were once roofed. Evidence of stone-made benches has been found inside the circles, which suggests that inside the structures is where people gathered.

In addition to the size of the pillars, which is fascinating, their decorative motifs are among the most unique on Earth. So far, experts have found that the stone pillars were decorated with abstract symbols, pictograms, and carved animal reliefs.

The pictograms are thought to represent sacred symbols, and many of them bear a resemblance to those found in Neolithic cave paintings around the world.

The most notorious reliefs at Göbekli Tepe depict lions, bulls, bears, foxes, gazelles, and donkeys; snakes and other reptiles. Göbekli Tepe’s builders also decorated their stones with symbols of arthropods such as insects and arachnids; and birds, particularly vultures.

Although the site where Göbekli Tepe now stands is a barren landscape, when the monument was built–some 12,000 years ago–the area most likely looked very different than today. It is believed that the surrounding area was home to lush forests and vegetation capable of sustaining a great variety of wildlife before millennia of human settlement and cultivation led to the conditions that prevail today.

In addition to the various symbols and animal motifs, a few humanoid figures are also present among the site’s symbolism. For example, some of the T-Shaped pillars have human arms carved on their lower half.

According to  Klaus Schmidt of the German Archaeological Institute, the arms represent the bodies of stylized humans (or even perhaps deities that the ancient people worshiped at the site).

Loincloths appear on the lower half of a few pillars. Schmidt believes the horizontal stone slab on top expresses shoulders, which implies that the figures were left headless. However, their exact representation and purpose have still not been understood.

Layer II has revealed that the builders crafted smaller rectangular rooms during this time period, which is traced back to around 9,000 and 8,000 BC. According to researchers, the rectangular buildings are an evolution in the buildings of Gobekli Tepe as they make use of space in more efficient ways.

Layer I, the uppermost part of the tell, bears evidence for the longest history of the site. This layer consists of loose sediments caused by erosion and the use of the hill for agricultural purposes, which can be traced back to a period when the site was no longer used as a ceremonial center. As revealed by Schmidt in a 2010 paper, Göbekli Tepe was backfilled sometime after 8000 BC. The site was buried under debris, mostly flint gravel, stone tools, and animal bones. The exact reason why people worked so hard to bury such a massive site remains one of the greatest mysteries surrounding Göbekli Tepe.

In addition to the intricate stone pillars, circles, and symbols at Göbekli Tepe, one of the most staggering discoveries made beneath the surface is a stone pillar resembling totem pole designs. It was found buried inside Layer II in 2010. Analysis of the artifact revealed its measures 1.,92 meters in height, and its eerily reminiscent of totem poles that have been discovered in North America.

The pole features three figures, the uppermost of which represents a predator, probably a bear, and a humanoid figurine below it.

Since the statue is damaged, the interpretation is not completely clear. But, interestingly, experts have recovered fragments of a similar artifact in another Turkey site at Nevalı Çori.