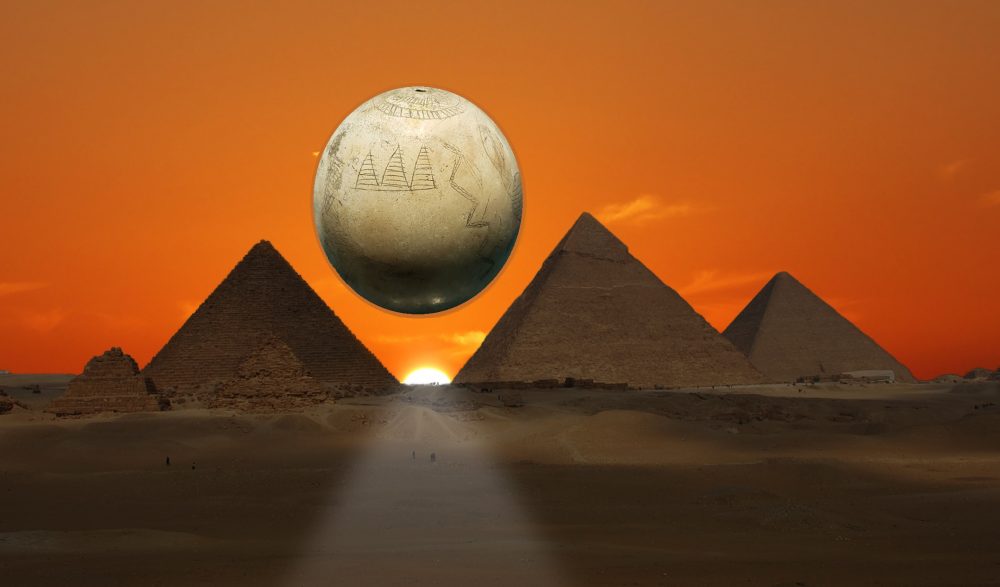 An ostrich egg, dating back around 7,000 years, allegedly depicts the three pyramids at Giza and the Nile River next to them. But how can this be? According to mainstream Egyptologists, the pyramids at Giza date back to around 4,500 years ago.

There’s a fascinating ostrich eggshell held at the Nubian Museum in Aswan, Egypt, that depicts, among its various illustration, three pointy triangles that some experts say depict the most prominent ancient Egyptian pyramids, those at the Giza plateau. The eggshell is believed to date back to around 5,000 BC, which means that the illustration is at least 7,000 years old.

This is an issue because, according to mainstream Egyptologists, the oldest Egyptian pyramid is that of Djoser, built at the Royal Necropolis of Saqqara around 4,700′ years ago. The Egyptian pyramids at Giza, on the other hand, are believed to date back to around 4,500 years ago.

So, what if the Egyptian pyramids are much older than initially thought?

The ancient Egyptians hunted ostriches from pre-dynastic times. Their eggs were widely used during this period for various purposes; the content of the eggs served as a nutritional powerhouse and helped feed the population, and their empty eggshells served as containers once emptied.

One peculiar ostrich egg was discovered in Nubia and is thought to date back to the Naqada I culture, and the contents of the tomb where the egg was found suggest that the artifacts from inside the tomb date back around 7,000 years.

But there’s a mystery surrounding the eggshell: etched on its surface are various illustrations, the most prominent of which are three pyramid-like structures. Several authors have proposed that the triangle-shaped objects etched on the eggshell’s surface are, in fact, depictions of the ancient Egyptian pyramids at Giza, the pyramids of Khafre, Khufu, and Menkaure.

But how could this be? If Giza’s pyramids are no older than 4,500 years, how are they illustrated on an eggshell that is believed to be at least 7,000 years old?

Either the eggshell does not depict Giza’s pyramids, or the pyramids of Giza date back much later than currently accepted by mainstream experts.

Although there are hundreds of pyramids in Egypt, those at Giza are the most famous and prominent. That’s perhaps because the Great Pyramid of Giza is the largest and tallest in Egypt—it is also the tallest in the world, although not the largest—and the pyramid of Khafre is the second-largest.

The third-largest pyramid at Giza is believed to belong to Menkaure. Together, the three pyramids are often illustrated as an example of Egypt, or the pyramids in General.

Modern representations of pyramids in Egypt will result in an image where all three pyramids are present.

If this is so in the 21st century, is it possible that the three pyramids served as the very same symbol thousands of years ago?

A detailed look at the ostrich eggshell reveals additional symbols. One such symbol painted right next to the tree triangles seems to represent the Nile River.

Skeptical views argue that in terms of size and design, the three triangles etched on the eggshell bear little similarities to the Egyptian pyramids; they don’t seem to match the proportions of the pyramids since all the triangles on the egg are nearly the same size. The three pyramids at Giza are clearly not the same size.

Instead, the three triangles on the eggshell seem to be more accurate representations of the so-called Nubian pyramids, structures reminiscent of the Egyptian pyramids but created much later, during a period when pyramids building in Egypt had already ceased for centuries.

If the triangles that decorate the egg do not represent the Nubian pyramids, and neither the Egyptian pyramids, what do they represent?

Another theory is that the triangles on the eggshells do not represent humanmade structures; they represent mountains, which, when looking at other illustrations from the Naqada I culture, were a popular artistic element.

Therefore, it is more likely that the triangles depicted on the eggshell are illustrations of mountains and the desert landscape, instead of the Giza pyramids. That doesn’t mean, however, that we have necessarily dated the pyramids of Egypt correctly.