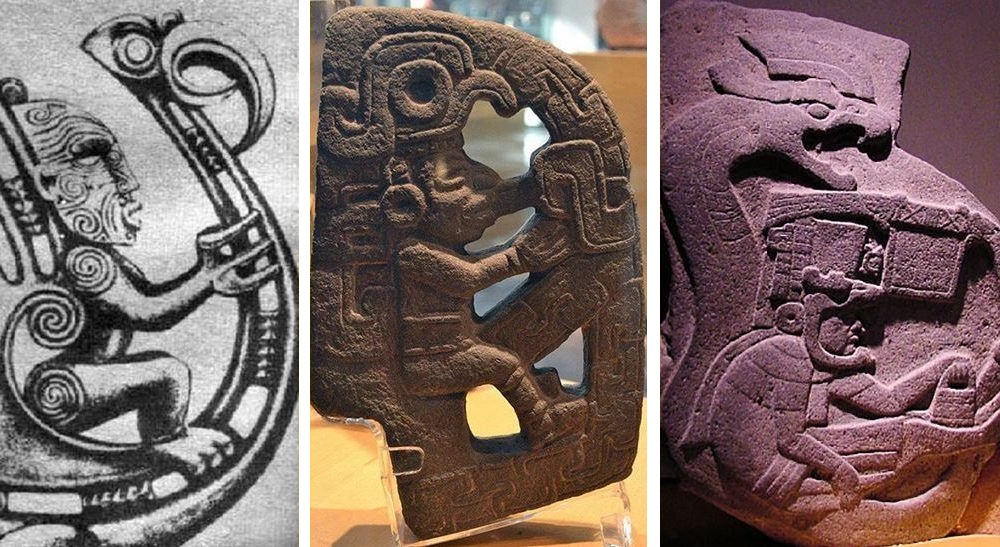 How is it possible that the ancient Olmec, Aztecs, Egyptians, and cultures as those in New Zealand share depictions of their gods—who came down from heaven—with mind-boggling similarities?

The history of the development of civilization on Earth is far from understood. There are missing links wherever we look.

History books have been rewritten in the past and will continue to do so with each discovery on Earth that pushes are understanding of humankind and its origins further into the shadows of doubt.

History is complex, and civilizations on Earth are even so. Evidence of complex societies existing on Earth thousands of years ago is nothing short of extraordinary, and evidence of their level of development speaks for themself.

We don’t need to invoke aliens and extraterrestrial visitations when trying to explain how ancient cultures worldwide achieved the unimaginable thousands of years ago.

Humankind is more than capable. Humankind has no limits. And it is because of this; we have still not fully understood our ancestors.

Many experts in the past have given inadequate credit to ancient civilizations. For example, until a few years ago, it was thought impossible for ancient cultures existing around 13,000 years ago to have built megalithic temples, quarried multi-ton stones, and erected some of the most sophisticated structures in the history of humankind.

This all changed, for example, when experts stumbled across the ruins of Gobekli Tepe in the 1990s and realized that already between 12,000 and 13,000 years ago, there were complex societies on Earth.

What if I told you that all ancient cultures were somehow connected thousands of years ago?

Have you ever wondered why there are so many similarities among ancient cultures around the globe?

Mainstream scholars maintain how cultures in Africa, America, Europe, and Asia weren’t interconnected in ancient times and couldn’t have made contact.

Take, for example, ancient monuments scattered across the globe.

Numerous ancient sites in South America display incredible similarities in design and construction to monuments erected halfway globally, in Africa and even Asia.

Are these similarities a mere coincidence? Or is there a possibility that all of these ancient cultures were interconnected somehow?

How is it possible that the ancient Olmecs, Aztecs, Egyptians, and cultures, as those in New Zealand, share depictions of their gods—who came down from heaven—with mindboggling similarity?

Is this just another example of random cultural spread? Or is it possible there is more to it than we are willing to accept? 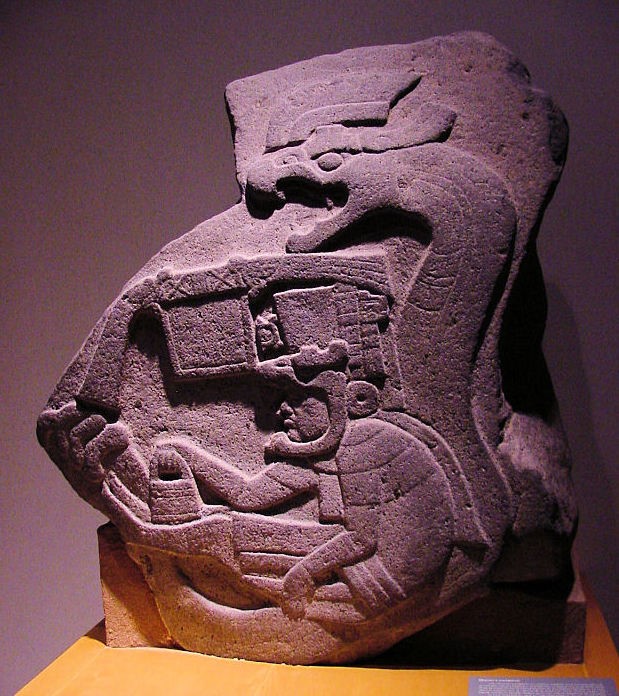 ‘La Venta’ stele 19 offers the earliest known representation of the Feathered Serpent in Mesoamerica. The feathered serpent was known across ancient cultures in Mexico as either Kukulkan or Quetzalcoatl. This ancient deity is said to have arrived from the heavens bringing great knowledge to ancient civilizations.

La Venta is an ancient archaeological site that belonged to the ancient Olmec civilization. Curiously, the Olmecs were one of the first civilizations to develop in the Americas. 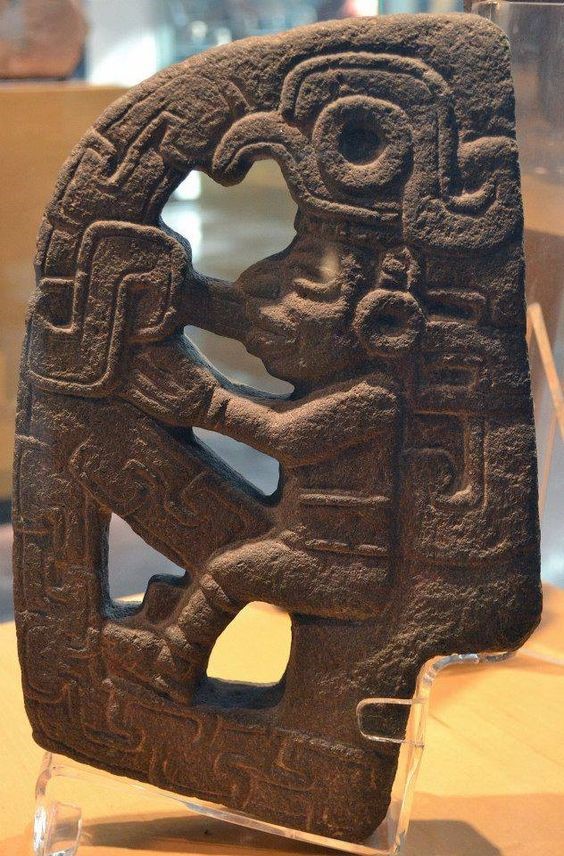 Another depiction of a deity inside what appears to be a kind of machine? Image credit: Museo Nacional de Antropología – INAH

‘La Venta’ stele 19 offers a curious representation of the feathered serpent. However, interpretations of what we are looking at can vary. An interesting alternative explanation could be a humanoid figure sitting in some ‘vehicle’ or ‘chair,’ manipulating some device.

At first, this may not sound extraordinary or weird.

However, it becomes strange when you find nearly identical representations of gods halfway around the world in New Zealand.

The Maori legend and the God Pourangahua 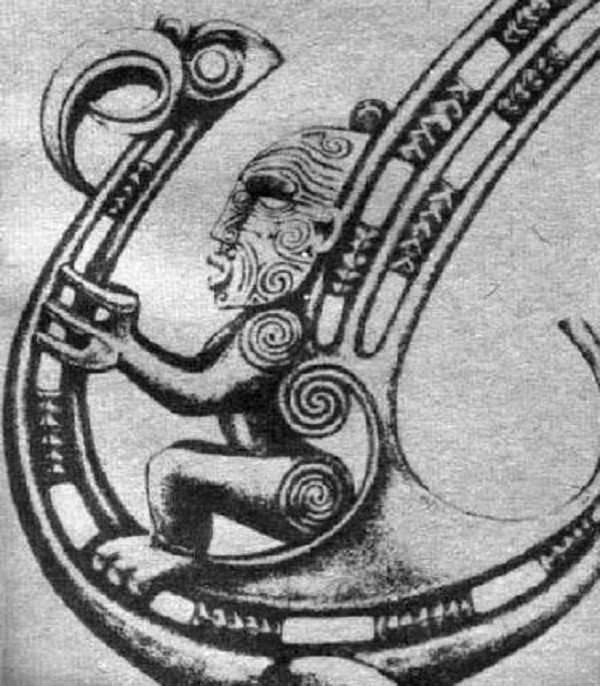 According to the Maori legend, the God Pourangahua flew on his magic’ bird’ from his legendary dwelling Hawaiki to New Zealand.

Curiously, according to legend, this ancient God came from heaven, riding a ‘silver bird.’

If we take a look at one of the oldest Maori prayers, we will find its attribution to the deity Pourangahua.

“I come, and unknown Earth lies below my feet. I come, and new heaven turns above me. I come onto this Earth, and it is a peaceful resting place for me. O spirit of the planets! The stranger humbly offers you his heart as nourishment.”

If we compare the depiction of the feathered serpent in ancient Mesoamerica folklore to the God Pourangahua, we find a mysterious connection: both are represented nearly identically.

How is this possible? A mere coincidence? But there are more fascinating examples that are too great a coincidence.

Let’s travel from ancient Maori legends to the lands of ancient Egypt. 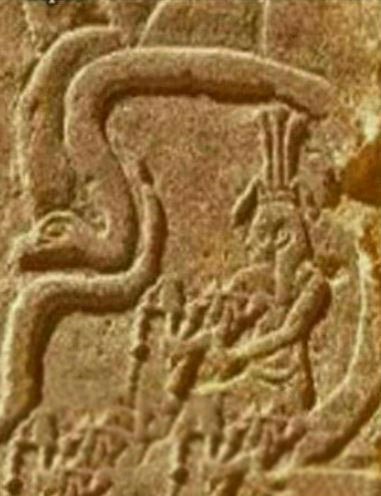 Another ancient God is depicted as a sort of flying snake. Image Credit: Pinterest.

Ancient Egypt is a treasure trove whose history has been written down in stone. There, we find a mysterious representation of the ancient Egyptian God Hapi. When I say mysterious, that’s because of the uncanny similarities to other deities around the globe.

Take a look at how he is sometimes depicted; Once again, we have a strange similarity to the feathered serpent in Mesoamerica and the God Pourangahua from ancient Maori folklore.

Another interesting depiction is that of ancient Maya King K’inich Janaab’ Pakal.

Carved lid of the tomb of Kʼinich Janaab Pakal, I am curious. If we look at an alternative explanation to what the lid depicts, we can say that the ancient Maya King appears to be sitting in some “device,” manipulating some controls.

The carved lid of King Pakal is one of the most talked-about subjects when it comes to the ancient alien theory.

Ancient alien theorists propose that it depicts King Pakal in some spaceship during takeoff, and they argue that his hands appear to be manipulating some machinery. His foot is located on a pedal while he is breathing through some breathing apparatus. Erich von Däniken first proposed the theory about Pakal’s spaceship in his book Chariots of the Gods. Once again, we see a depiction of a figure inside of some machine.

Even though some invoke extraterrestrial explanations when trying to understand the odd depictions of King Pakal, his large stone sarcophagus lid is a unique piece of Classic Maya Art iconography whose central idea is wrapped around the symbolism of the world trees, the sun, the moon, and stars. The central image on the sarcophagus lid is said to depict a cruciform world tree, and beneath the King is an illustration of a two-headed serpent.