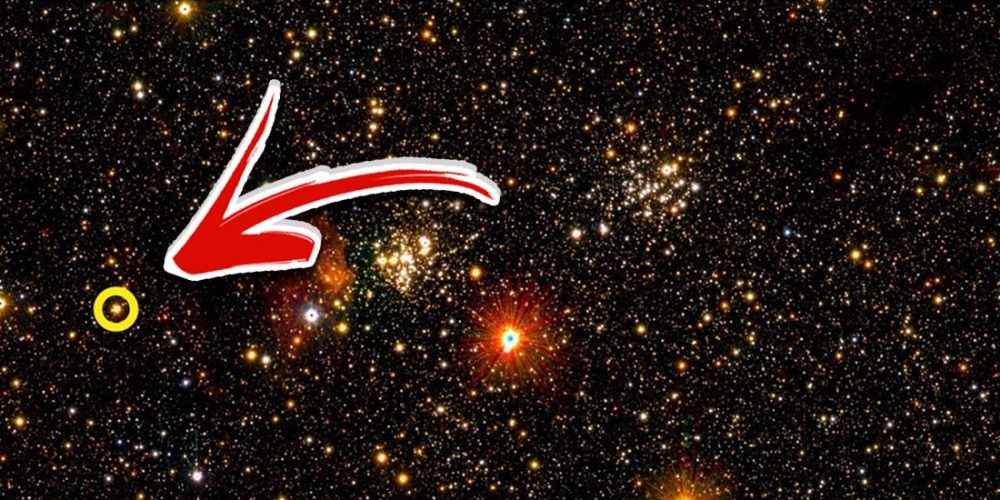 I firmly believe Earth is not the only planet in the universe where life exists.

“Look again at that dot. That’s here. That’s home. That’s us. On it everyone you love, everyone you know, everyone you ever heard of, every human being who ever was, lived out their lives. The aggregate of our joy and suffering, thousands of confident religions, ideologies, and economic doctrines, every hunter and forager, every hero and coward, every creator and destroyer of civilization, every king and peasant, every young couple in love, every mother and father, hopeful child, inventor, and explorer, every teacher of morals, every corrupt politician, every “superstar,” every “supreme leader,” every saint and sinner in the history of our species lived there-on a mote of dust suspended in a sunbeam.”

The above is Carl Sagan’s quote as he described the pale blue dot, a photograph of planet Earth taken on February 14, 1990, by the Voyager 1 space probe from a record distance of about 6 billion kilometers (3.7 billion miles, 40.5 AU), as part of that day’s Family Portrait series of images of the Solar System. 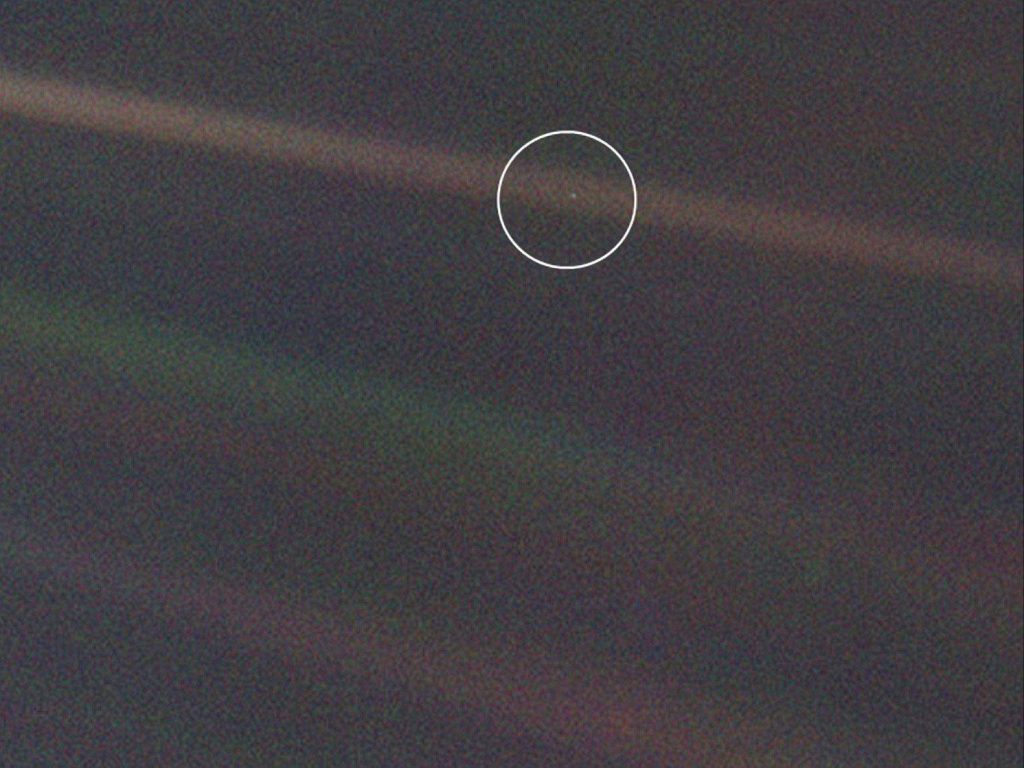 The photograph perhaps describes how little we are in the universe. We, every person on Earth, every nation and region, all living beings are part of one, large, but insignificantly small ‘cosmic island’ traveling the cosmos.

And while many believe we are the center of everything, the most important part of the cosmos, the truth is that we can’t really grasp how little and small we are.

The universe is a massive pace. It’s so freakishly huge that despite our best calculations and theories, we can’t fully understand its size, or why it even exists.

And all of the above is in constant motion.

Our planet revolves around its own axis as it makes its way around the sun.

This means that not only do we reside in an expanding, massive unexplored universe, but as you are reading through this, everything around us, including planets, moons, stars, and even galaxies hurtle through space at incredible speeds.

And to understand all of the above, here are a few images that will help you understand where we are in space and just how significant we are.

Here’s the scaled distance between Earth and the moon.

Below we see that all planets in our solar system fit perfectly between the Earth and the moon. 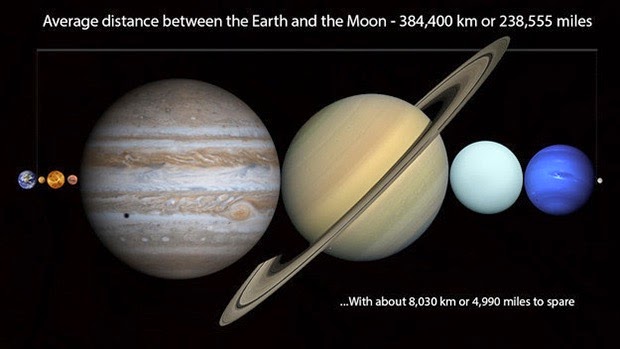 This is our sun compared to all the planets in our solar system. Earth is barely visible. 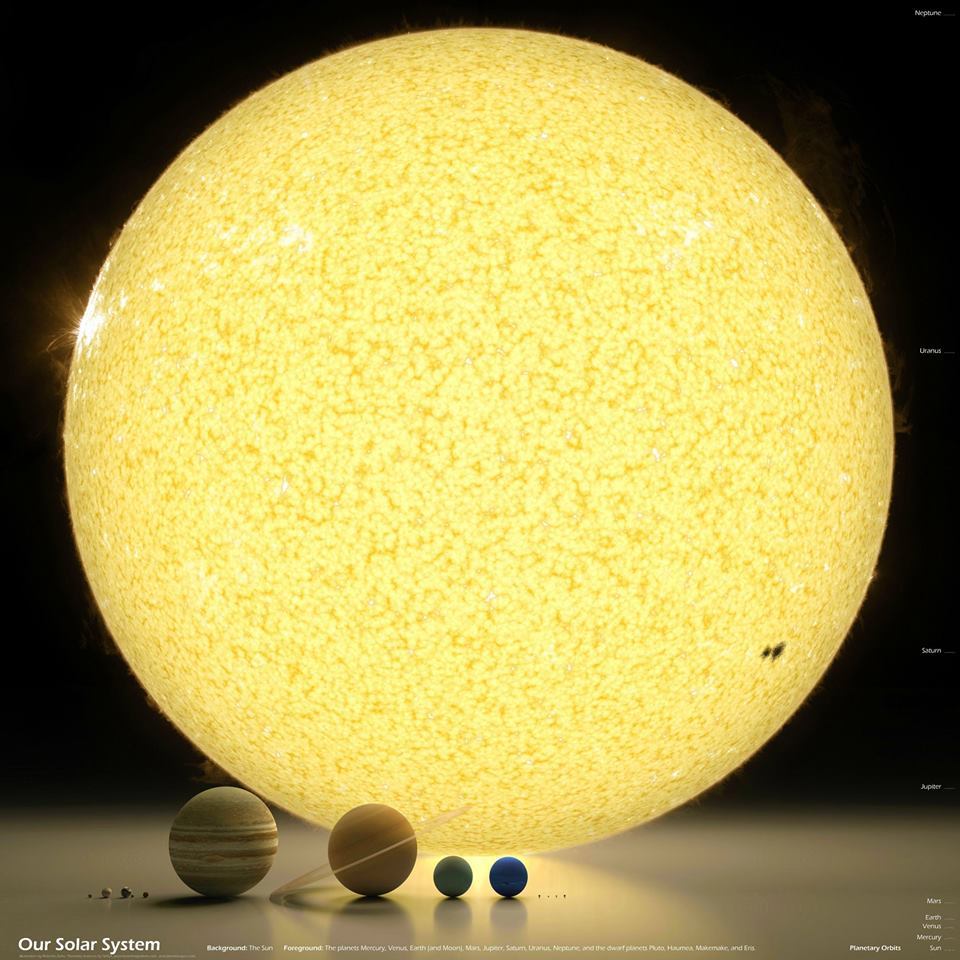 Earth compared to our sun. 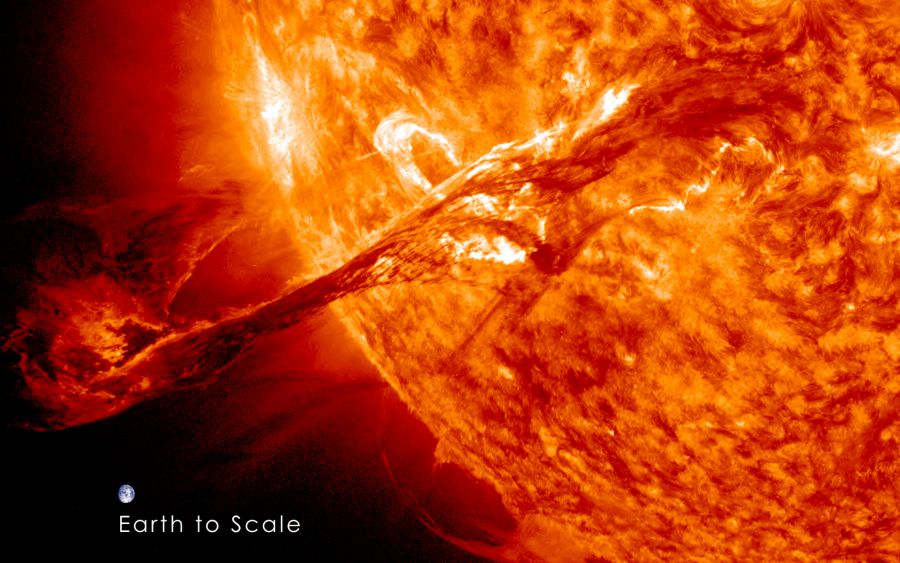 But even the sun is small compared to other stars in the universe. 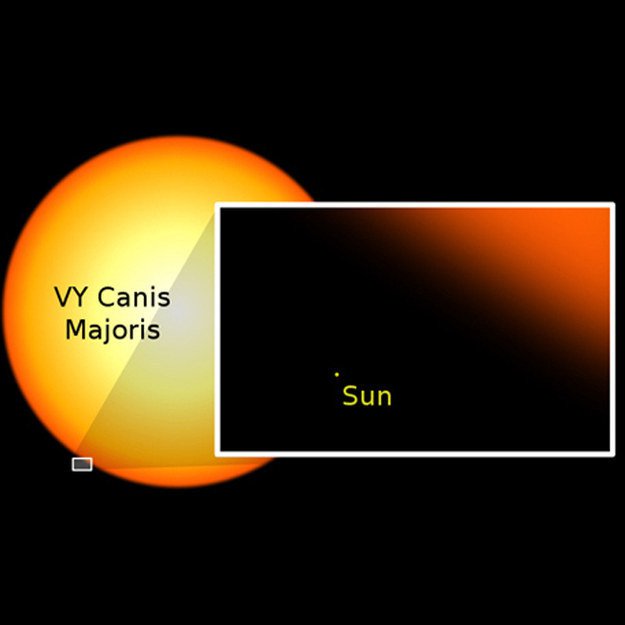 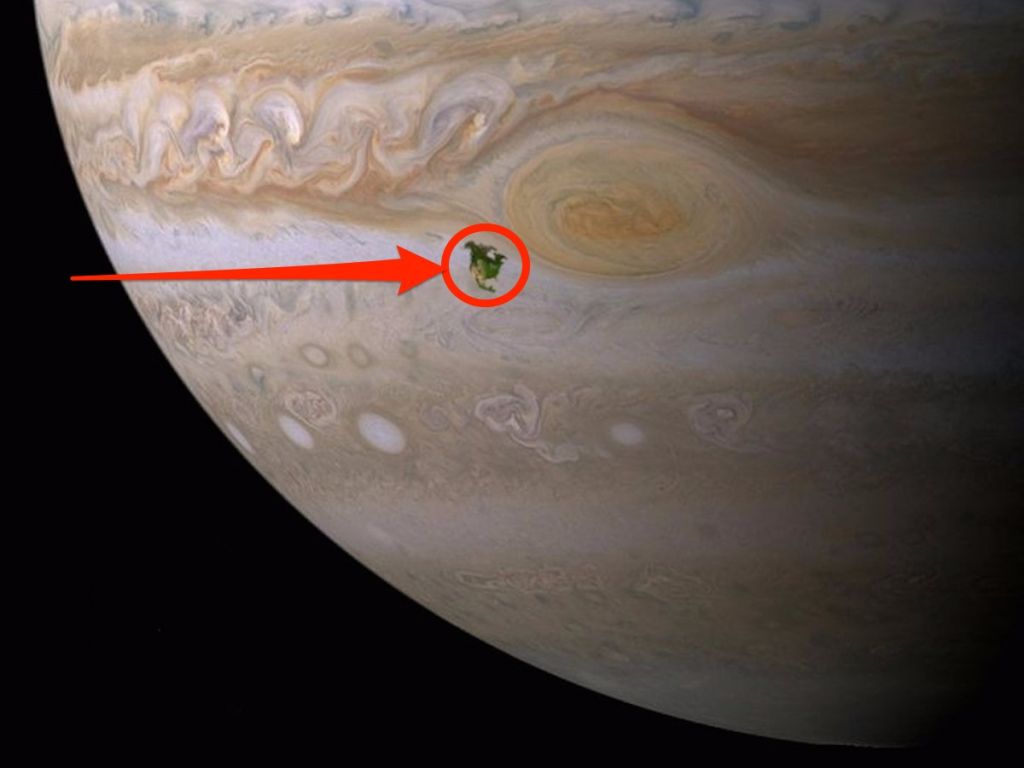 And here’s a view of Earth, next to Jupiter, the solar system’s biggest planet. 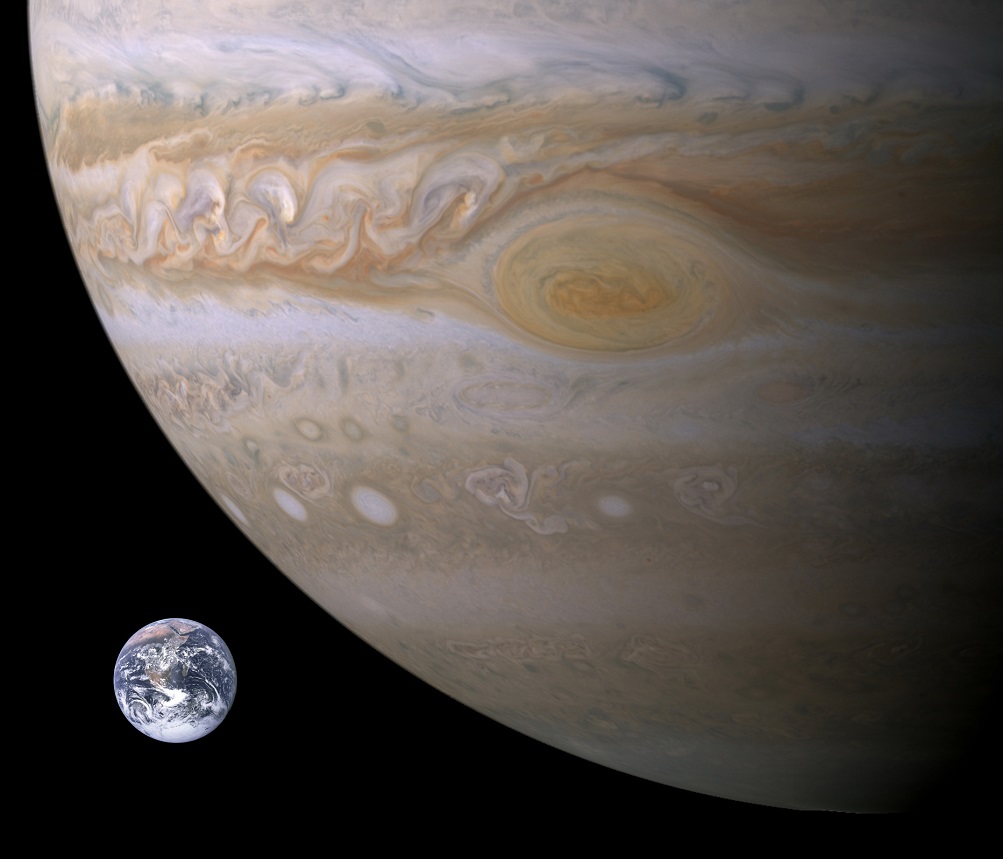 One day we will set foot on Mars, and this is what future astronauts will see, as they look towards Earth.

This is Earth as seen from Mars: 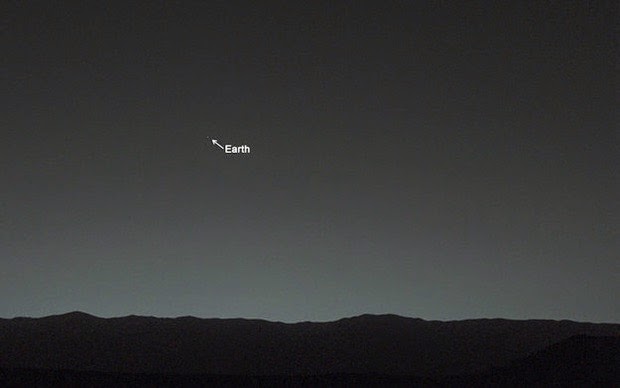 The Pale Blue Dot. Earth as seen from the Voyager 1 space probe from a record distance of about 6 billion kilometers (3.7 billion miles, 40.5 AU). 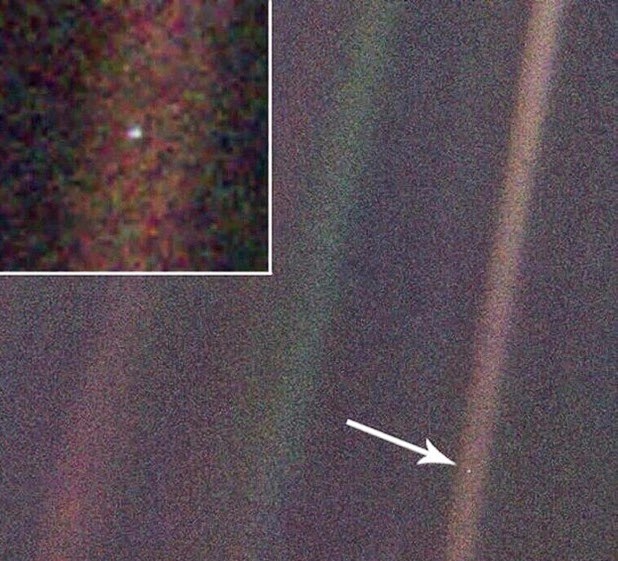 Here’s where we are in the Milky Way Galaxy. 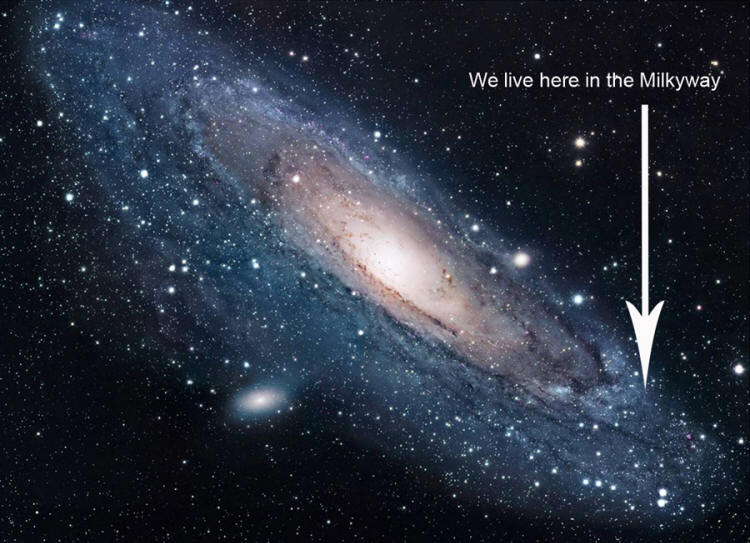 Yes, the Milky Way is a huge galaxy, but it is extremely small compared to some of the largest galaxies discovered in the universe. 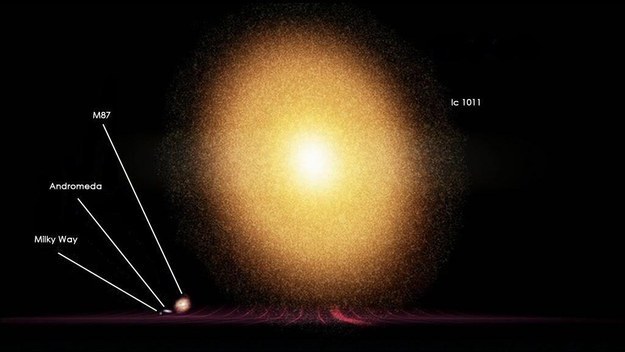 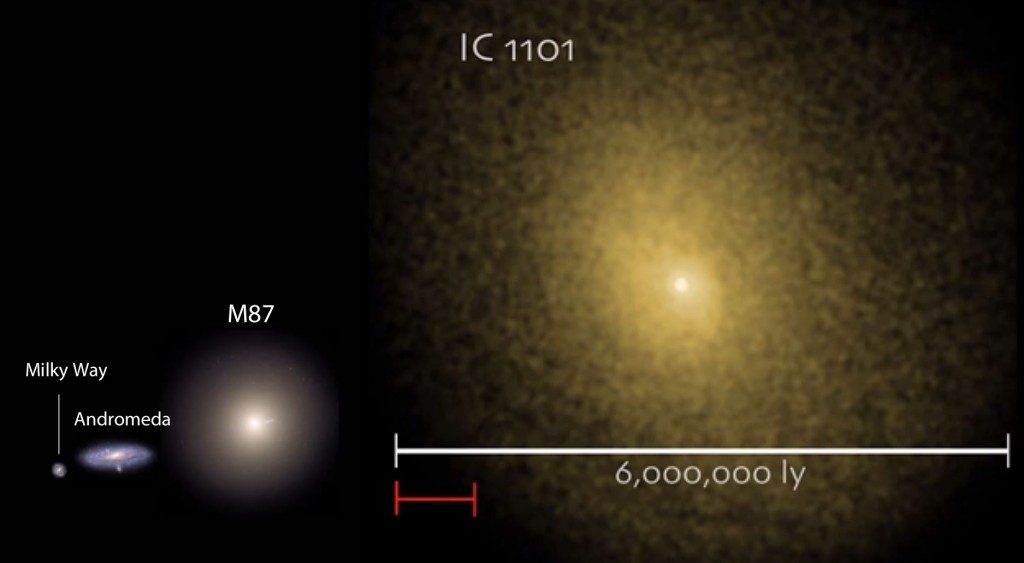 Here’s a  9 Gigapixel image of the Milky Way. The below image is just a small part of the entire picture. All of those dots are stars, and most of them are orbited by planets.

Seen below is a computer simulated image of an area of space more than 50 million light-years across, presenting a possible large-scale distribution of light sources in the universe—precise relative contributions of galaxies and quasars are unclear.

This view below shows us our solar system’s neighborhood. 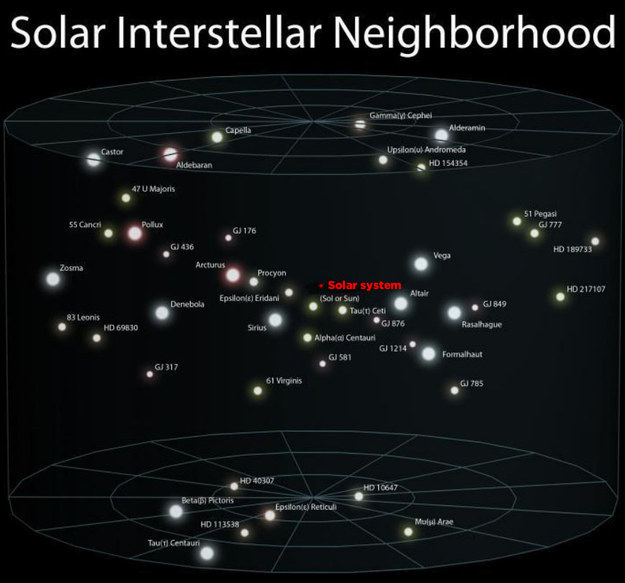 And here’s our Local Galactic Group. 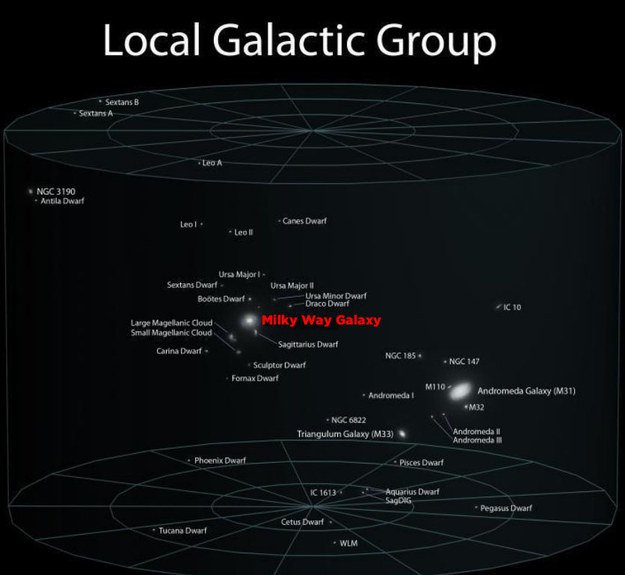 Here’s a different view of the Local Group. 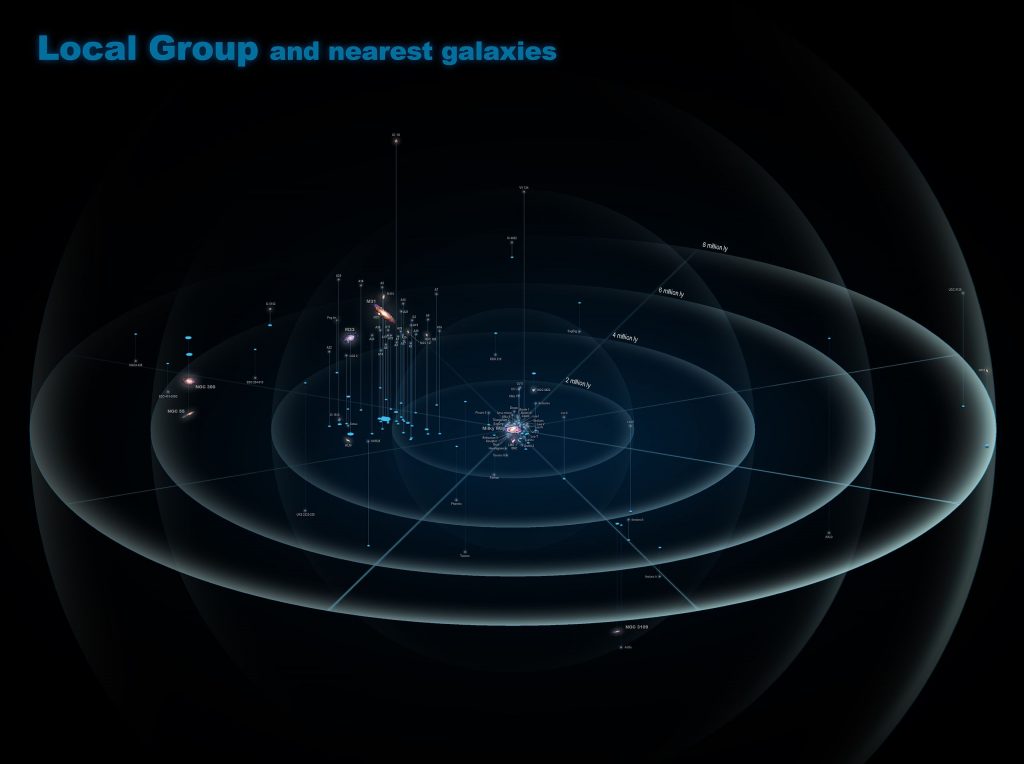 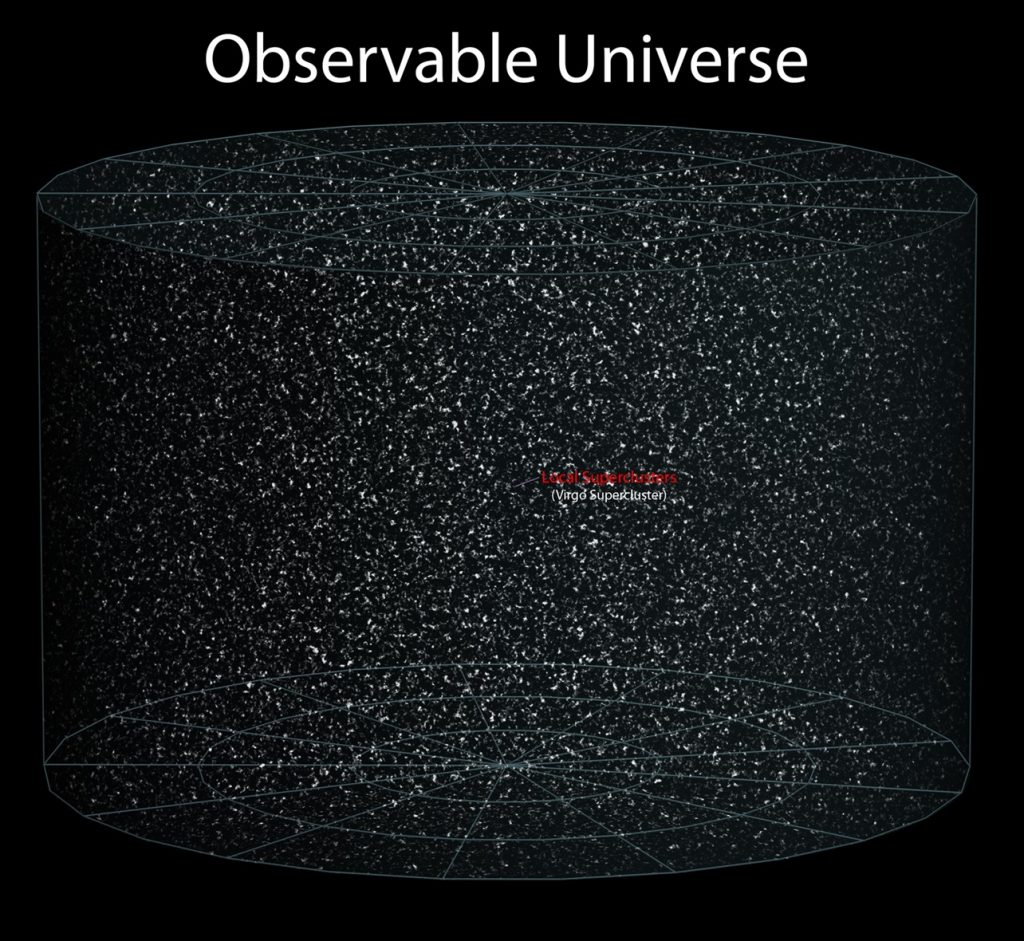 A simulated view of the entire observable universe, approximately 93 billion light-years (or 28.5 billion parsecs) in diameter. The scale is such that the fine grains represent collections of large numbers of superclusters. The Virgo Supercluster—home of Milky Way—is marked at the center, but is too small to be seen in the image. 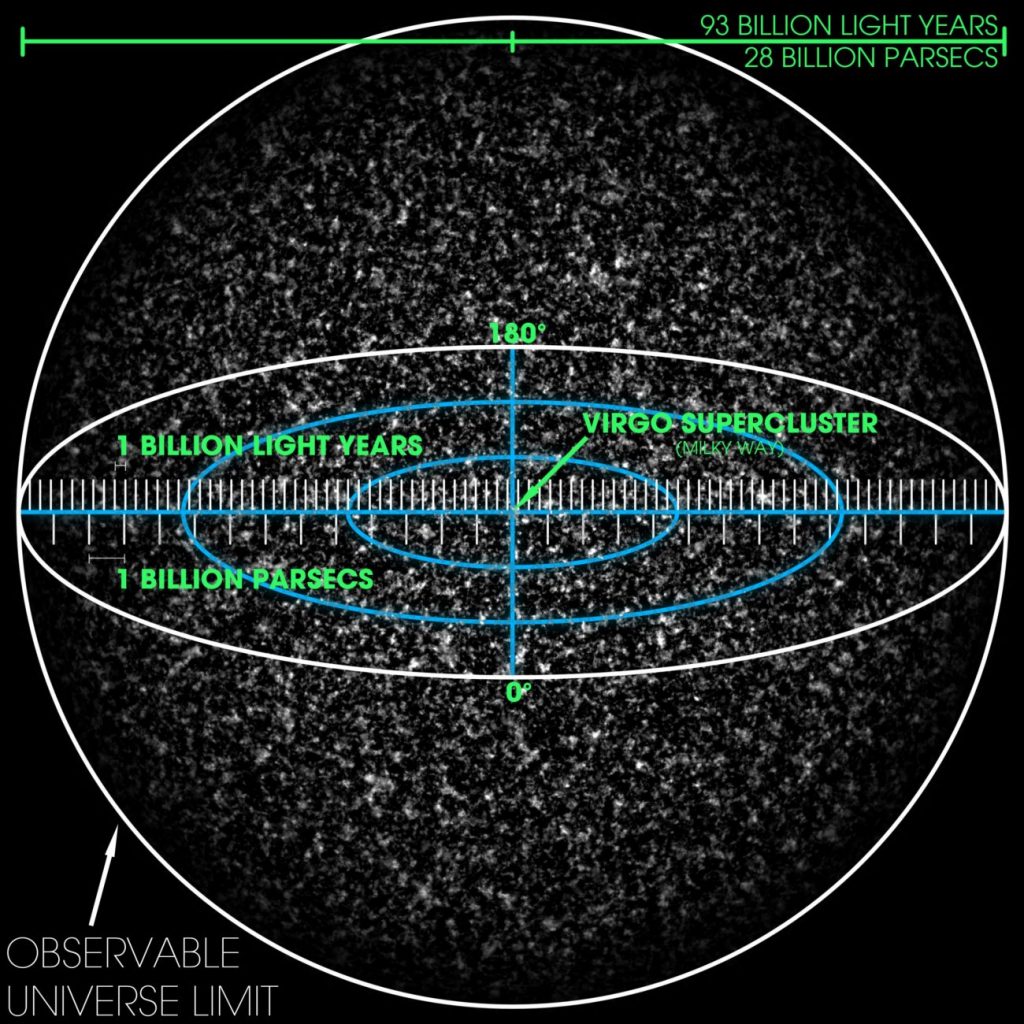 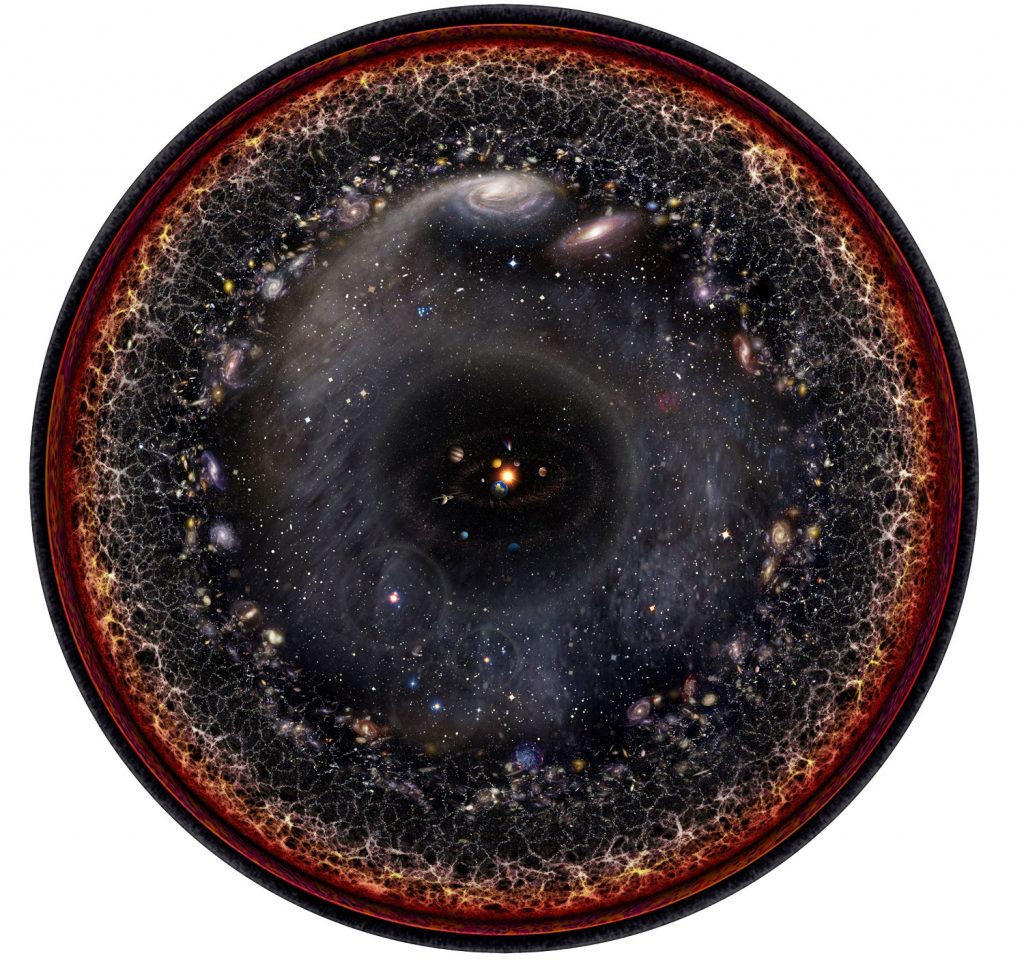 This is the estimated size of the universe: 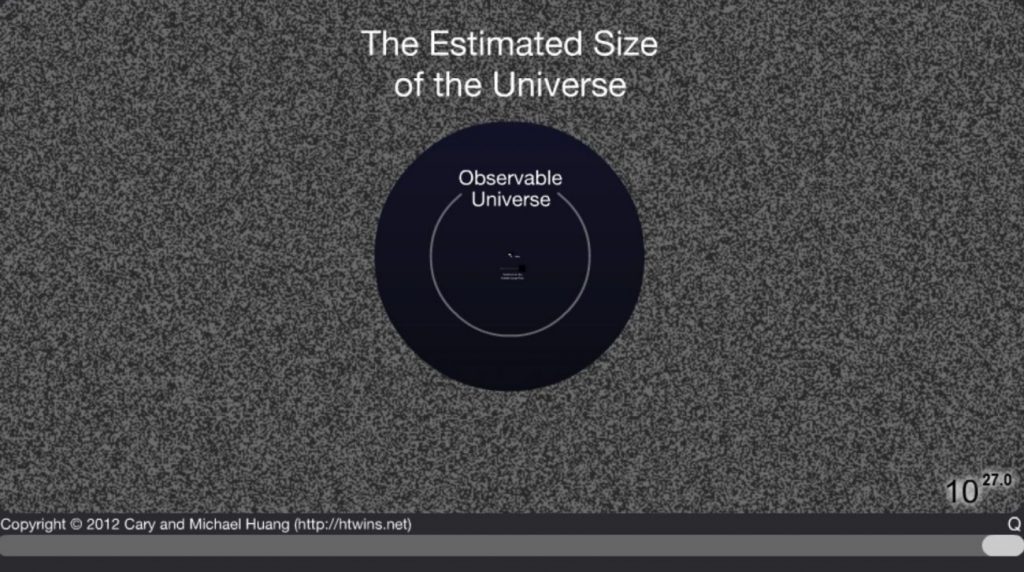