U.F.O.s are a hotly debated topic, or a least they’ve become one in a society that is eager to find out if we’ve ever been visited by beings not from Earth.

Countless declassified documents have revealed that governments have kept a close eye on unidentified aerial phenomena for decades and spent millions of dollars while studying strange lights in the sky.

In this article, we bring you twenty compelling facts about Unidentified Flying Objects that will immerse you into ufology like never before.

Declassified U.F.O. Documents. Even though governments around the world have ignored studying or even believe in U.F.O.s, a plethora of recently declassified documents tell an entirely different story.

We now know that the American Government (for example) has spent millions of dollars on studying flying objects that defy our very understanding of physics.

You can find examples of UFO-related declassified documents here, here, and here.

Not long ago, the U.S. State Department declassified a video recording filmed by a Boeing warplane F/A-18F Super Hornet. In the video, we see a U.F.O. flying at high speed, to the pilot’s disbelief.

Video Footage, the best evidence. The above video filmed by the F/A-18F Super Hornet isn’t the only video where we can see a U.F.O. In fact, there are quite a few videos out there that challenge our very understanding of the subject.

The so-called STS-75 Tether Incident is perhaps one of the best videos out there. 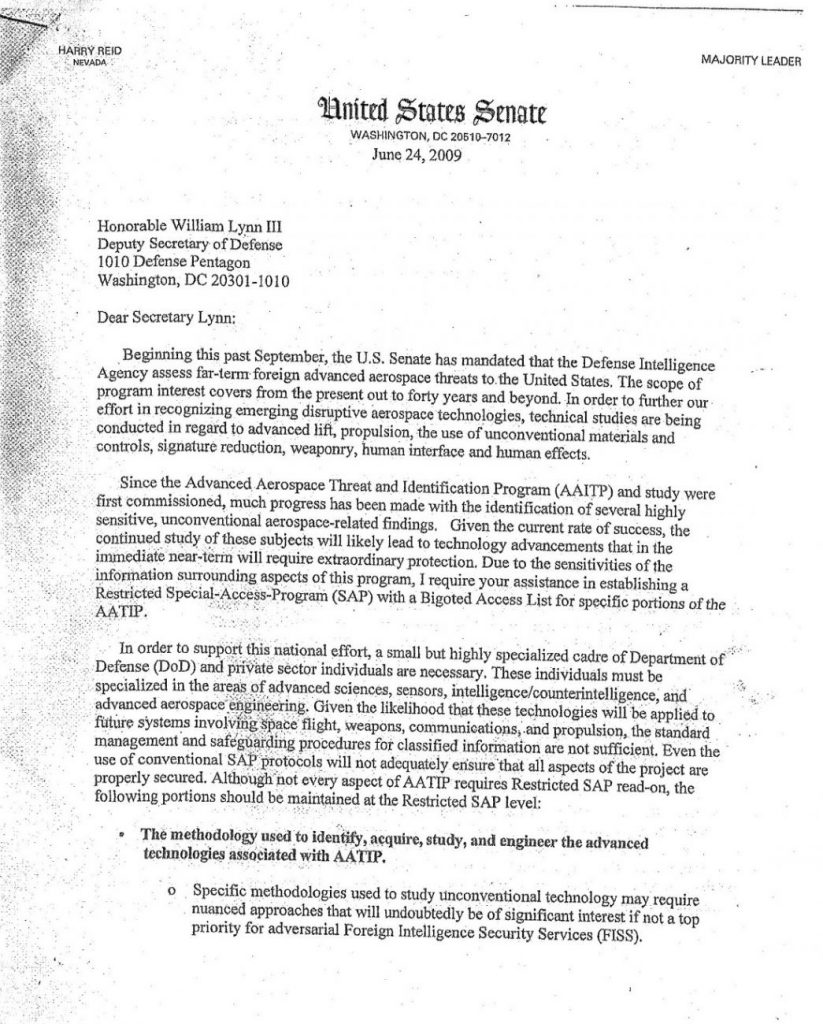 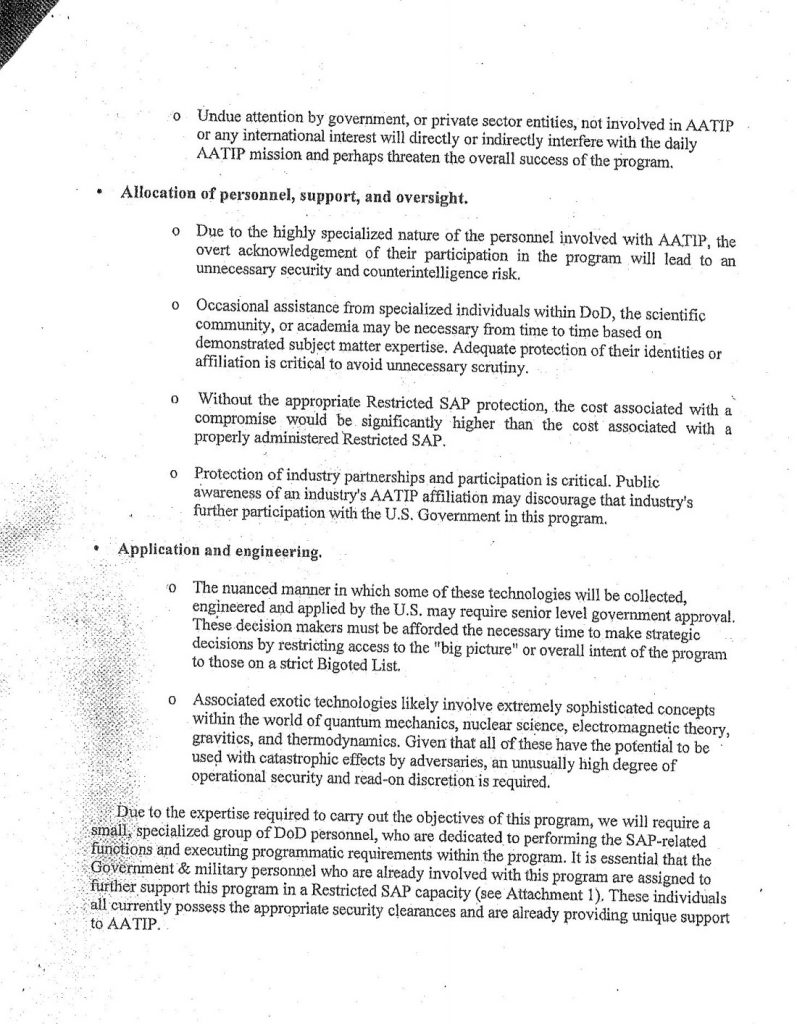 The documents relating to the Advanced Aerospace Threat Identification Program (AATIP) investigation clearly state that the United States has carried out secretive studies of ‘technologies’ that could allow them greater military control over other nations.

And while certain conspiracy theories may be nothing more than just that, there are several strange details about mysterious encounters that took place in Antarctica.

In 1965, scientists from three different Antarctic research stations reported seeing U.F.O.s in the region. Numerous official reports were published about the encounter: two from the FACh (Chilean Air Force) and two others released by the Argentine Navy. The British Antarctic Survey (B.A.S.) also published a report.

“Argentine base (on Deception Island observed a moving colored light on June 7th, 20th, and July 3. Chilean base (also on Deception) made similar observations on the latter two dates. Flickering red-green-yellow light observed from British Base 2300 Z July 2 die north; it had moved in two waves quickly from the west then reversed along the course for a short distance before returning again to the north where it remained stationary for about 20 minutes.” 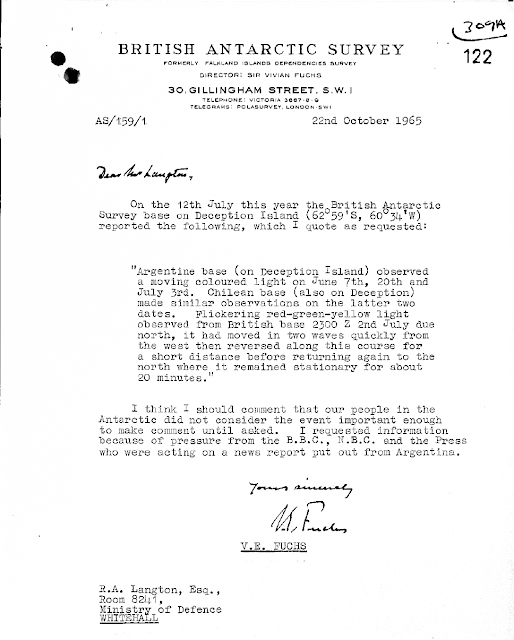 I should comment that our people in the Antarctic did not consider the important event enough to comment until asked. I requested information because of pressure from the B.B.C., N.B.C, and the Press, who acted on a news report put out from Argentina.

According to the C.I.A.’s library:

This collection catalogs C.I.A. information on this subject from the 1940s through the early 1990s. 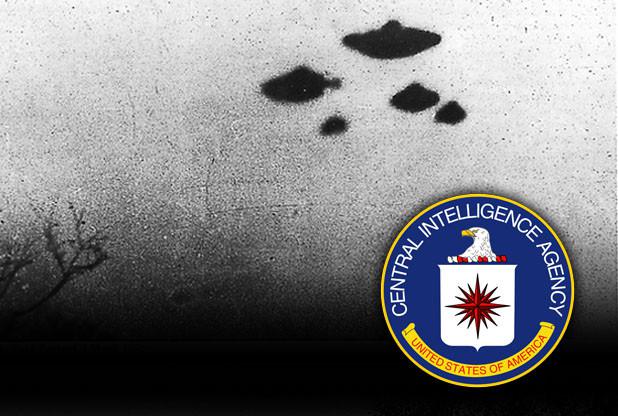 Most of the documents concern C.I.A. cables reporting unsubstantiated U.F.O. sightings in the foreign Press and intra-agency memos about how the Agency handled public inquiries about U.F.O. sightings. For the most recent C.I.A. information on U.F.O.s, see the article “C.I.A.’s Role in the Study of U.F.O.s, 1947-90” at the Center for the Study of Intelligence website (https://www.cia.gov/library/center-for-the-study-of-intelligence/index.html). See On-line Publications / the “Studies in Intelligence” section, specifically semi-annual Edition #1, 1997.

The event was so significant that the local newspaper gave the following description of the events over the city: 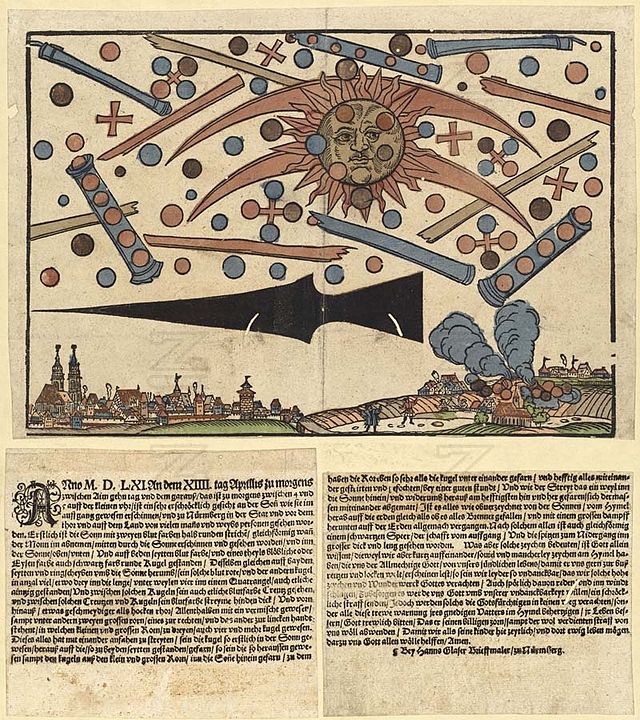 “In the morning of April 14, 1561, at daybreak, between 4 and 5 a.m., a dreadful apparition occurred on the sun, and then this was seen in Nuremberg in the city, before the gates, and in the country – by many men and women. At first, there appeared in the middle of the sun, two blood-red semi-circular arcs, just like the moon in its last quarter. And in the sun, above and below and on both sides, the color was blood, there stood a round ball of partly dull, partly black ferrous color. Likewise, there stood on both sides and as a torus about the sun such blood-red ones and other balls in large number, about three in a line and four in a square, also some alone. In between these globes, there were visible a few blood-red crosses, between which there were blood-red strips, becoming thicker to the rear and in the front malleable like the rods of reed-grass, which were intermingled, among them two big rods, one on the right, the other to the left, and within the small and big rods there were three, also four and more globes. These all started to fight among themselves so that the globes, which were first in the sun, flew out to the ones standing on both sides; thereafter, the globes standing outside the sun, in the small and large rods, flew into the sun. Besides, the globes flew back and forth among themselves and fought vehemently with each other for over an hour. And when the conflict in and again out of the sun was most intense, they became fatigued to such an extent that they all, as said above, fell from the sun down upon the earth ‘as if they all burned’ and they then wasted away on the Earth with immense smoke. After all this, something like a black spear, very long and thick, sighted; the shaft pointed to the east, the point pointed west. Whatever such signs mean, God alone knows. Although we have seen, shortly one after another, many kinds of signs on the heaven, which are sent to us by the almighty God, to bring us to repentance, we still are, unfortunately, so ungrateful that we despise such high signs and miracles of God. Or we speak of them with ridicule and discard them to the wind so that God may send us a frightening punishment on account of our ungratefulness. After all, the God-fearing will by no means discard these signs, but will take it to heart as a warning of their merciful Father in heaven, will mend their lives and faithfully beg God, that He may avert His wrath, including the well-deserved punishment, on us, so that we may temporarily here and perpetually there, live as his children. For it, may God grant us his help, Amen. By Hanns Glaser, letter-painter of Nurnberg”. (Source: Colman S. Von Kevicsky, “The Ufo Sighting Over Nuremberg in 1561” Official Ufo January 1976, pp. 36-8, 68. The translation is by Ilse Von Jacobi.)

One of the first U.F.O. reports in America. The first ‘official’ mention of Unidentified flying objects in North America can be traced back to 1639. The event took place near the city of Boston. John Winthrop, governor of the Massachusetts colony, wrote in his personal diary that inexplicable lights filled the sky in March of that year. Several people reported losing track of time.

The letter reveals that “Examination revealed the exhibit had likely formed part of a vehicle that traveled in outer space.”

The letter explains how in October of 1968, a J. Hodges, regional representative of the Associate Committee on Meteorites of the National Research Council of Canada, was handed a miniature metal fragment that had been discovered by an unnamed pilot of the CDL (Crime Detection Laboratory.) 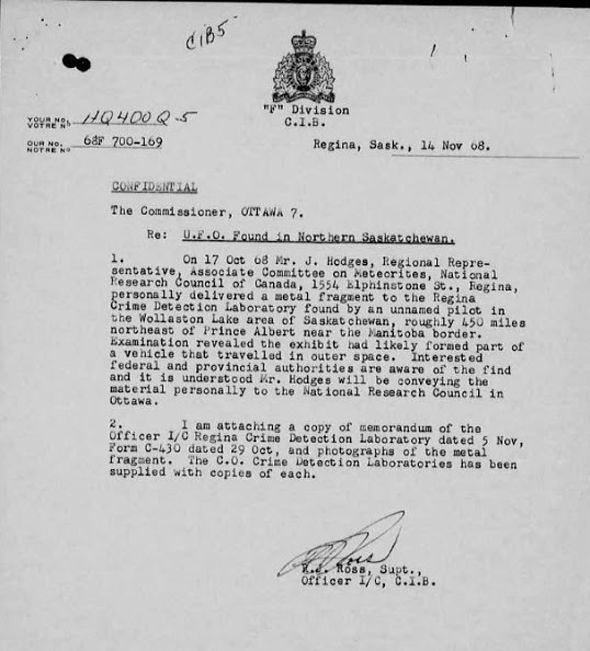 The strange metallic object was discovered in the Wollaston Lake area, around 450 miles from Prince Albert, near the Manitoba border.

Oppenheimer and Einstein wrote about U.F.O.’s. A now unclassified document written by Robert Oppenheimer, an American theoretical physicist, and Albert Einstein, a German theoretical physicist, details the “Relationship with Inhabitants of Celestial Bodies.”
The fascinating six-page document is one of the first to speak about Extraterrestrial Biological Entities. It indicates that the presence of U.F.O.s is accepted by the military and has been for a long time. You can read the entire document by clicking here.
Winston Churchill wrote about Alien life. “I, for one, am not so immensely impressed by the success we are making of our civilization here that I am prepared to think we are the only spot in this immense universe which contains living, thinking creatures, or that we are the highest type of mental and physical development which has ever appeared in the vast compass of space and time…”—Winston Churchill.
The document, written in 2939 and titled “Are We Alone in the Universe?“ accurately predicted the existence of large numbers of stars and how they could have numbers of planets.
California is a U.F.O. Hot Spot. As noted by the National U.F.O. Reporting Center, there have been more U.F.O. sightings in California than in any other state in the United States. Even more interesting is perhaps the fact that Los Angeles has experienced the most U.F.O. sightings, especially between 2001 and 2015.
Oh and, L.A. was home of one of the most famous U.F.O. sightings in History. Dubbed the ‘Battle of L.A. in February of 1942, people witnessed a strange saucer-shaped object above the city. A massive object was picked up on the radar on the morning of February 25 before quickly disappearing again. 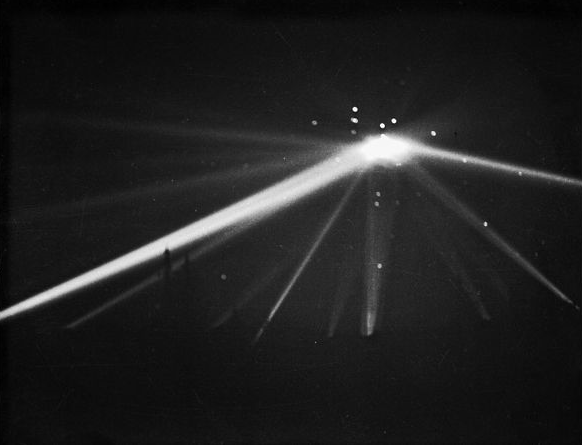 The city went completely dark as Air Raid sirens started going off. Massive searchlights searched the sky for potential threats. Eventually, the anti-aircraft fire started going off, and in the middle of the ‘battle,’ a photograph of the enigmatic object was taken.
One of the lesser-known but still interesting sightings. On July 19, 1952, air traffic controllers at Washington National Airport spotted the presence on the radar of an unidentified flying vehicle moving at mind-bending speeds. In the following weeks, members of the armed forces and air force reported seeing strange flashes of light in the sky. The United States Air Force set up a major press conference to calm the public. And while several explanations were given, the object spotted on radar remains a mystery.
Rendlesham Forest Incident. One of the most mysterious U.F.O. sights took place in December of 1980 when members of the United States Air Force stationed at R.A.F. Woodbridge and Bentwaters reported seeing a mysterious craft in the sky.
Allegedly, the U.F.O. irradiated several different colors. The craft landed, and soldiers went out to investigate.
They supposedly found the spaceship. The following day, radiation levels where the alleged U.F.O. landed were off the charts, and there were reports of damaged trees in the vicinity. 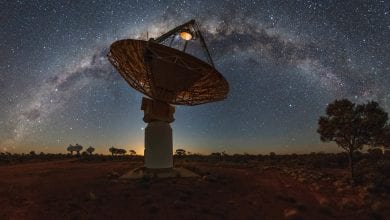