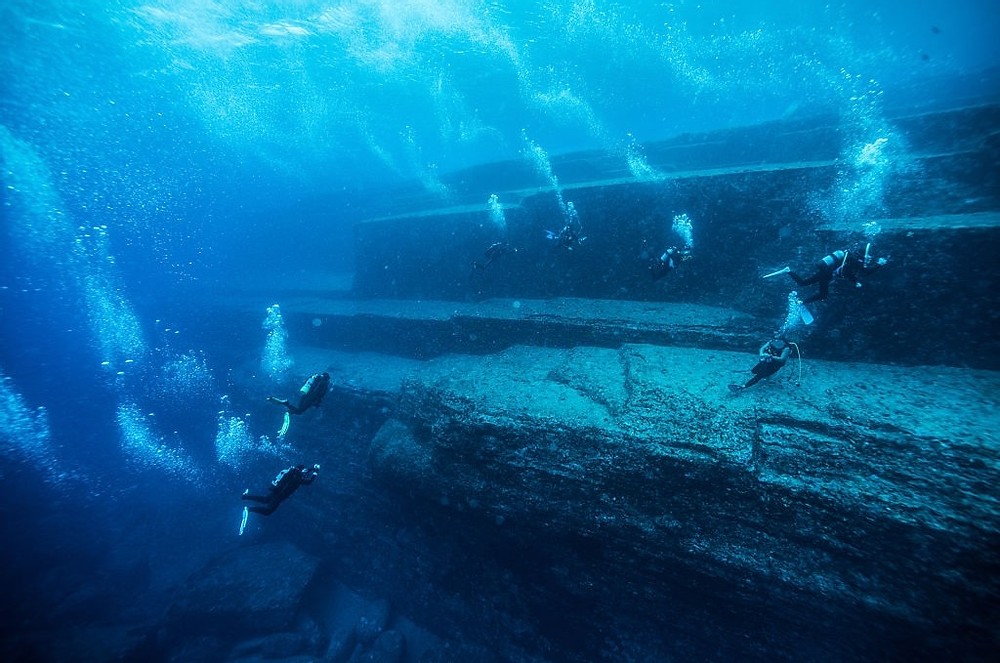 Although it remains unconfirmed, the Submerged Yonaguni Monument could potentially be one of the world's oldest cities.

At a depth of 25 meters off the coast of the western Japanese island of Yonaguni are mysterious underwater pyramids and the remains of an ancient city, nowadays known as the submerged Yonaguni monument.

The unusual formations were discovered in 1987 by a local diver. They resemble an architectural complex, including pyramids similar to the Inca pyramids, flat terraces, and massive steps.

The underwater city quickly became a sensation. Even after numerous studies that do not stop today, researchers have not reached a consensus on the origin of the underwater structure. According to some, they were formed naturally and were additionally shaped by ancient people. Others are convinced that the monument is entirely the work of human hands.

Here are 10 Things you should know about the submerged Yonaguni Monument.

1. Archaeologists have agreed that the monument is more than 10 000 years old

I mentioned that experts disagree about the origin of the pyramid and the surrounding ruins. However, there is a general agreement about the site’s age, and it is estimated to be between 10 000 and 16 000 years old, which would make it the oldest human-made ruins in the world if it is ever confirmed by more promising evidence.

2. Some experts believe that it is a natural formation

I mentioned this in the introduction, but now I want to express my disagreement with this theory. Based on the pictures of the monument and the words of researchers, there are too many factors that prove human influence.

3. Apart from the famous pyramid, there are ruins of columns, roads, and walls

Nature is the greatest artist, but it cannot create everything. There is no way that the ruins of the Yonaguni monument can be natural. The addition of columns, pillars, platforms, roads, and walls are enough evidence for human influence. Who and how made it, however, will likely remain a forever mystery.

4. The Yonaguni monument was obviously not submerged when it was made

If we assume that the site originates from around 10 000 years, this would mean that it was entirely above sea level. At that time, the world’s oceans’ level was 40 meters lower than it is now.

A Japanese professor named Masaaki Kimura has spent the past two decades measuring and mapping the Yonaguni monument. He, like many others, believes that the largest structure is a stepped pyramid.

6. The size of ​​its base is almost the same as the area of ​​the Pyramid of Cheops, and its height is about 30 meters

This should give you a pretty good idea of the size of the alleged submerged pyramid.

7. The highest point of the monument is only 5 meters below sea level

This simple fact is what surprises me the most. How was it not discovered ages ago when the top area of the monument is so close to sea level, and the island of Yonaguni is a popular diving destination.

8. Some experts believe that the monument closely resembles the work of Mesoamerican cultures

Those of the researchers who believe that the complex was the work of human hands provided more and more photos showing the obvious resemblance of the underwater terraces with the high mountain temple complexes in South America and more precisely with the ancient facilities in Sacsayhuaman and Kenko, completely carved in the rocks of the Peruvian Andes.

9. The Yonaguni monument could be the legendary lost land of Mu

A 19th-century British archaeologist called Augustus Le Plongeon introduced the legend of the lost continent of Mu. This was a new name for the mythical Atlantis, while others consider it a completely new mystery.

Furthermore, there are several other alternatives suggested by researchers. Kimura, the Japanese professor, also theorized that it could be the lost ancient Chinese country of Yamatai.

10. a powerful ancient tsunami may have submerged the Yonaguni monument

Researchers generally agree that a natural cataclysm may have caused the fate of the site. In general, Japan and the surrounding area are extremely seismic, and powerful earthquakes and tsunamis occur literally every decade.

We know a terrible tsunami hit the region around the end of the 18th century. Therefore, it is absolutely possible and highly likely that numerous tsunamis hit the area earlier in history.

Treasures of the Deep: 7 Underwater Discoveries That Left Experts Amazed