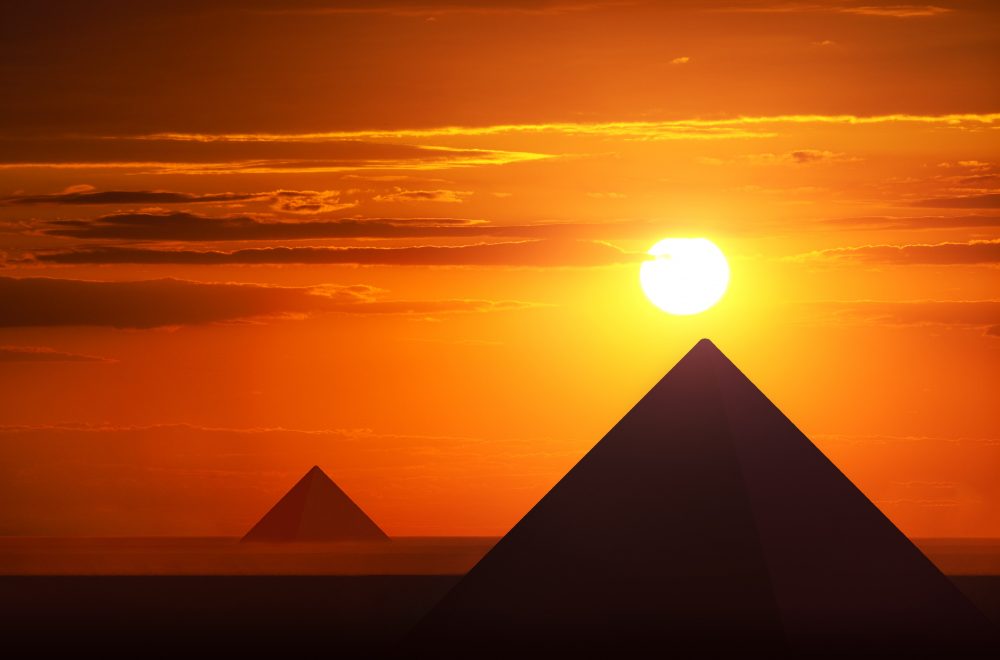 According to History.com, King Djoser, in the 2630 B.C, constructed the oldest known pyramid, the Step Pyramid

The ancient Egyptian pyramids were some of the greatest fascinations in human history. One of the primary reasons for building the pyramids was to provide security to the sepulcher. The most fantastic pyramids were built during the 5th and 6th dynasties of the Ancient Egyptian kingdom between 2500 and 2100 BC.

During this period that Pharaoh had absolute power, Egypt was defensible. It was separated from major powers by desert on both sides and the ocean to the north. This means there was little or no threat. At the period, the geography of Egypt was fundamental to pyramids constructions because the annual flooding of the larger parts of the Nile and part of the country made farming almost impossible.

This often lasted for over a month, and because farmers could not work, they were available as corvee labor for building pyramids. The power to build a pyramid rested on the king, who summoned all the resources for such epic projects.

According to History.com, King Djoser, in the 2630 B.C, constructed the oldest known pyramid, the Step Pyramid. This culture continued for hundreds of years before the last of the monumental pyramids built by Pepy II petered out. Below, you will discover the three main reasons the Ancient Egyptians stopped building pyramids.

Dilution of Power and Scare Resources

Before the end of the Old Kingdom, the political space of Egypt began to break down and the split into administrative divisions known as nomes headed by a nomarch as governor. In the earlier dynasties, nomarchs were descents of royal families, and as the political space evolved, nomarchs became hereditary and were monopolized by the influential noble families. This dilution of political power made it impossible to muster the needed physical resources and manpower to built pyramids.

As this culture became commonplace, the pyramids, especially during the 5th and 6th dynasties, continued to get smaller because of shortcuts arising primarily due to the high cost of constructions. As the emphasis on sun templates became rampant during the 4th dynasty and the economic cost of monumental projects and lessening central power became pronounced, the phasing out of pyramids constructions in Ancient Egypt became a commonplace.

Hundreds of centuries afterward, since the change in funerary customs, a few kings harnessed resources to build pyramids in a bid to help their souls reach the afterlife in the 12th dynasty. The efforts yielded small and less impressive pyramids; thus, leading to the complete stopping of pyramid construction.

The Adventures of Thieves

The decentralization of power no doubt comes with its demerits. During the First peak of the disunity and political chaos popular referred to as the Intermediate Period in the history of Ancient Egypt, the pyramids were ransacked as the trappings of the state diminished.

Note that not only was there the need to build pyramids and associated complexes, but altars in the mortuary temples of the kings also had to be perpetually replenished with food and offerings. The kings’ generosity extended to his cherished courtiers with the eternal supply of food for associated chapels to make sure the satisfaction of their souls. The richness of pyramids, housing wonderful treasures, became easy targets of adventurous thieves.

Not only did pyramids fell out of favor with the New Kingdom pharaohs, the worsening desire to conceal the tombs of the noble kings from grave robbers lead to the total abandonment of pyramids construction.

The Land Grants of Priests

The accumulation of power and wealth at the expense of kings was not the sole characteristics of provincial governors, priests also amass colossal wealth, especially land-holdings and power.

Every monumental pyramid has an associated mortuary temple staffed by priests who maintained rites of remembrance for the dead. These priests were supported with land grants to cater to their needs and maintenance of the tomb and temple complex.

Noteworthy is that as the Egyptian pyramids were huge, the temple complexes and associated land grants were equally huge. This trend continued until it became evident that the productive lands of Egypt fell under the control of temple priests, leaving future kings with little resources to cater for their funeral lavishness. This was further worsened by the inability of kings to appropriate lands from his predecessor’s mortuary cults without threat to the perpetuity of his cults.

Finally, the magnificence of Egyptian pyramids would still have remained a captivation of the world had the trend continued. Sadly, worsening resources’ scarcities, adventures of thieves, and land grants of priests became the last straw that broke the camel’s back.