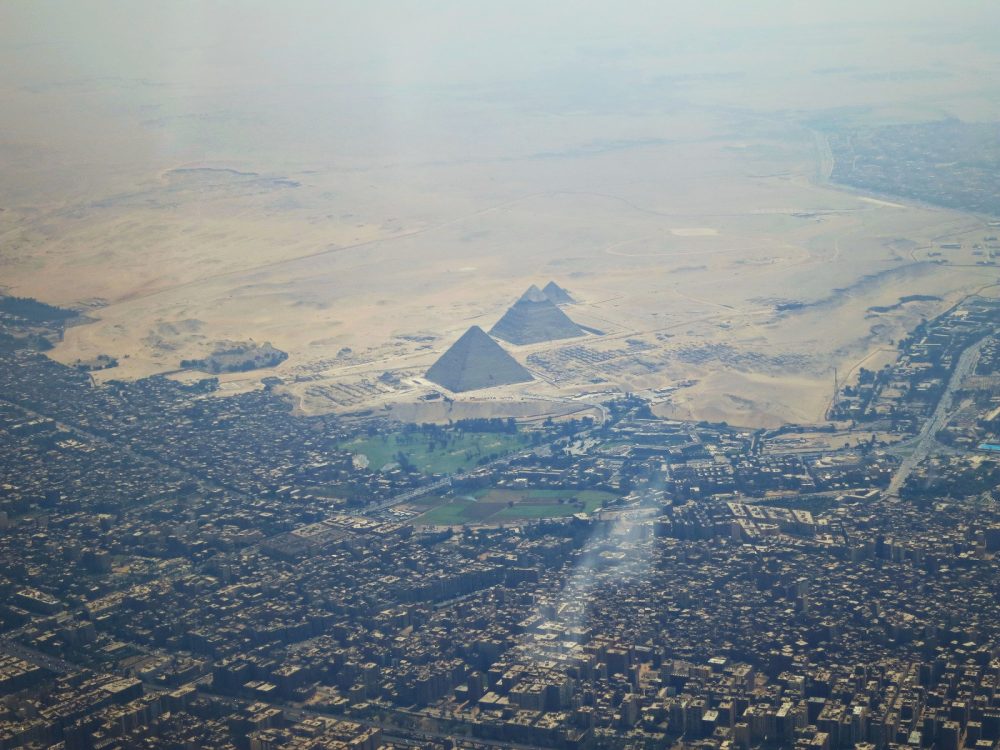 The Great Pyramid of Giza does not have four sides.

The Great Pyramid of Giza is one of the most fascinating ancient structures ever built on the planet, and it is not just because of its tremendous size or incredible design.

The Great Pyramid, which has been identified as the tomb of Pharaoh Khufu–perhaps wrongly–is unique for a number of reasons.

Standing proud at the Giza plateau not far from modern-day Cairo, the Great Pyramid was the first smooth-sided Pyramid built on the plateau.

However, it was not the first of Egypt. In fact, before the construction of the Great Pyramid of Giza, a number of pyramids were erected in the land of Pharaohs.

As noted by Mark Lehner, one of the most famous Egyptologists to have researchers pyramids, and one of the scholars who argue the Pyramids of Egypt were used as royal tombs, it is hard to overemphasize the dramatic leap in the architectural size and sophistication represented by Egypt’s first royal stone complex, the Step Pyramid Complex of Djoser at Saqqara.

Rising from the desert at a 54-degree inclination, the Bent Pyramid was redesigned several times during construction. It was finished with a much shallower angle of 43 degrees, precisely what gives it its very obvious bent shape.

But it is this Pyramid at Dahshur that represents a clear transitional form between Djoser’s Step Pyramid and smooth-sided pyramids, which would be perfected by the time the Great Pyramid of Giza was completed. In addition to that, the Bent Pyramid of Sneferu is also unique among the more than 100 pyramids of Egypt, and that’s due to its original polished limestone outer casing, which remains largely intact.

No other pyramid in Egypt still bears so many of its outer casing stones. The precisely placed, well-polished limestone gives justice to its ancient name; the Bent Pyramid is generally translated as (The)-Southern-Shining-Pyramid, or Sneferu-(is)-Shining-in-the-South. When the Pyramid was completed, it would most likely have shone with extreme brightness and would have been visible from miles away as it reflected the shining sun.

After the Bent Pyramid, Sneferu would not refrain from Pyramid building. On the contrary, he built one that was even more stunning than the Bent Pyramid. Also, at Dahshur, Pharaoh Sneferu commissioned the construction of what is now recognized as the first true smooth-sided Pyramid of Egypt; the Red Pyramid.

In fact, Sneferu built the third-largest Pyramid of Egypt, and during his reign, it was Egypt’s largest, most sophisticated smooth-sided Pyramid.  The Red Pyramid, also known as the North Pyramid, was built with a shallow 43-degree angle, just as the upper parts of the Bent Pyramid of Dashur, signalizing a normative in terms of pyramid building.

Experts argue that the Red Pyramid was built in no more than 17 years, in which the builders successfully completed a massive structure with a total volume of 1,694,000 cubic meters (59,823,045 cu ft). The design of the Red Pyramid is most likely the direct result of the development of pyramid building at Dahshur and Saqqara. Long before the Red Pyramid was built, there were numerous failed attempts of pyramids in Egypt. One such example is the Pyramid at Meidum, one of the first pyramids attempted by Sneferu.

Eventually, Sneferu passed his throne to Khufu, his son, and Pyramid building in Egypt reached its peak.

Many people would agree that no mere description can do the Great Pyramid justice or even convey an idea of true size. Scholars have worked out a number of meticulous calculations to relate the structure’s height and bulk with other monuments built across the planet.

As noted by some measurements, the area of the base would contain the cathedrals of Florence and Milan, St. Peter’s in Rome, and St Paul’s Cathedral, and Westminster Abbey in London. If all the stone in the Pyramid were sewed into blocks one-foot square, and these blocks were laid and to end, they would stretch two-thirds of the way around our planet at its equator. The Great Pyramid of Giza was built with around 2.3 million blocks of stone, many of which weigh more than 3 tons. It has been calculated that the total weight of the Great Pyramid of Giza is around 6 million tons.

But the Great Pyramid at Giza has been leaving people stunned since time immemorial. In fact, during his campaign in Egypt, Napoleon calculated that the Great Pyramid and its neighboring structures contain enough stone to construct a wall 3 meters high and 1-meter thick, which would enclose all of France. Napoleon’s calculations were corroborated by a mathematician who was among the savants that accompanied his expedition to Egypt.

In addition to its tremendous size and the amount of stone used in the construction of the Pyramid, the relationship that exists between the Pyramid and the Earth is unsettling for some: Taking the Great Pyramid’s height and multiplying it by 43.200, you obtain 3938.685 miles, which is short of just 11 miles of the actual measurements for the polar radius of our planet.

Taking the perimeter at the base of the Pyramid and multiplying it by 43,200, we get 24,734.94 miles—a result short of 170 miles of the true equatorial circumference of our planet.

Misconceptions about the Great Pyramid of Giza

Since the Great Pyramid of Giza is like a rockstar of the ancient world, many misconceptions about it are found in books and the internet.

The Great Pyramid of Giza was not built by slaves as some people may have read on the internet and even history books going back a few decades. This rumor was started by the Greek writer Herodotus who visited the Great Pyramid around 400 BC. Herodotus heard stories from alleged priests, which he eventually used as facts in his writing. Today, we know that the Pyramid was not built by slaves but by well-paid workers.

The interior of the Great Pyramid still remains unexplored. Yes, people can enter the Pyramid and visit the Grand Gallery, the King’s Chamber, and the Queen’s Chamber, but there are still rooms inside the Pyramid that have not been discovered. Evidence of that fact is a discovery made by the ScanPyramids project, which discovered a previously unknown chamber in the middle of the Pyramid. We have still not accessed it, but it leads us to believe there many more similar cavities within the Pyramid.

The Pyramids were built with ramps and primitive tools. Although the most acceptable theory concerning the construction of the Great Pyramid is that it was built by people dragging massive blocks of stone through the desert, using nothing but primitive tools made of stone or copper, making use of ramps, the truth is that we still don’t know for certain. There isn’t a single ancient text that mentions the exact construction method of the Great Pyramid of Giza.