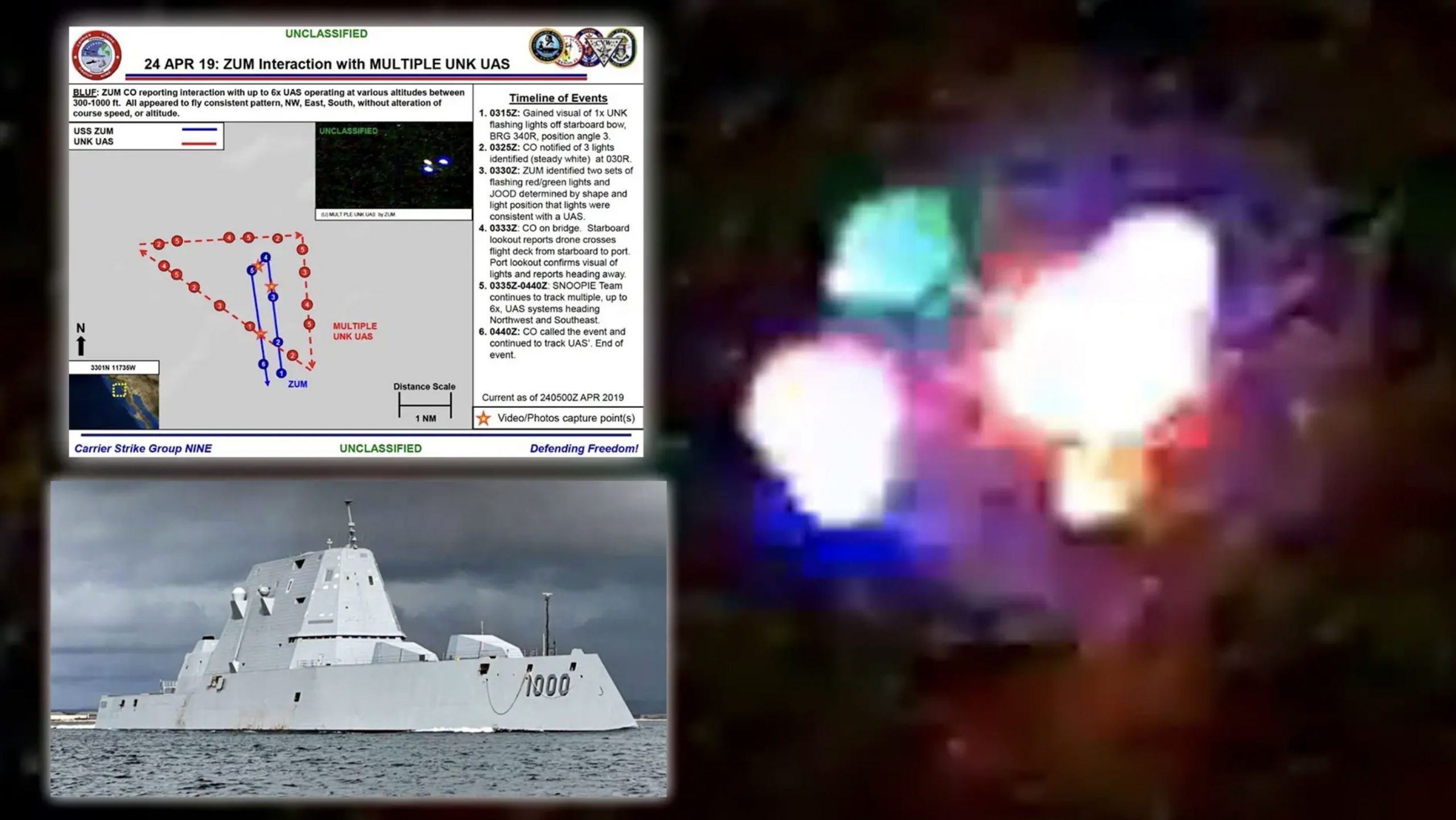 An unclassified video has been released by the Navy showing how its most advanced destroyer, the USS Zumwalt, was swarmed by at least six unidentified "drones."

A new video has been released by the U.S. Navy showing six unidentified drones flying over the USS Zumwalt, one of its most advanced surface combatants. This incident occurred in April 2019 off the coast of Southern California. Due to its position at the head of a prestigious class of controversial stealth surface combatants, the USS Zumwalt (DDG-1000) has a very unique role. During certain operations, the ship’s stealth technology enables it to operate closer to enemy territory than other destroyers, enhancing its survivability.

This video was released under Freedom of Information Act requests as part of a probe into reports of drone swarm incidents near Navy vessels throughout 2019 off southern California. Earlier updates on the investigation provided detailed information about these bizarre events, including unclassified videos and photographs. Though most drone swarms occurred in July 2019, War Zone has been informed of several new incidents earlier in the year. One of these incidents involved the USS Zumwalt. Approximately 17 nautical miles from Camp Pendleton, the incident occurred on April 24, 2019, at approximately 8:30 pm Pacific Time.

A USS Zumwalt crew observed up to six unmanned aerial systems (UAS) flying between 300 and 1,000 feet above the surface of the water during the event. It is reported that the UAS crossed the deck of the USS Zumwalt at one point in the incident. SNOOPIE, the Nautical or Photographic Boat Interpretation and Exploitation team, documented the drones once again, as it did during previous similar incidents. By using a variety of commercial cameras, these sailors document dangers, uncertainties, and unusual situations. Listen to a sailor’s account of the incident, and view newly obtained footage here:

Due to the fact that the video was captured at night, it is difficult to analyze it thoroughly. The USS Zumwalt likely had access to a wide range of sophisticated sensors during the incident, although unclassified records release to the public tend to be disappointing. An array of various lights in a rectangular formation is the only clear feature in the video. White and green light is visible, and a red light flashes intermittently in the center.

As opposed to other cases where Navy personnel, including fighter pilots, reported and recorded objects that behaved like no human-made aircraft, this time, it would seem was not the case. Therefore, it might be questioned if the Navy readily releases these videos as a response to their precisely explainable and well-known nature, something that, according to the War Zone in an exercise of debunkism, could be applied to true unidentified aerial phenomena. David Kovar, CEO of URSA Inc., a firm that specializes in drone safety issues, said he could not determine the aircraft’s configuration, but it appears to be a multirotor drone, probably a quad, with four regularly spaced running or navigation lights.

Nevertheless, in accordance with new rules established for the Pentagon office dedicated to UFO investigations, these types of incidents must now be discarded as rapidly as possible in favor of those that are not man-made objects and can be referred to as UAPs, meaning unidentified aerospace-submarine phenomena.

Further reading can be done here.