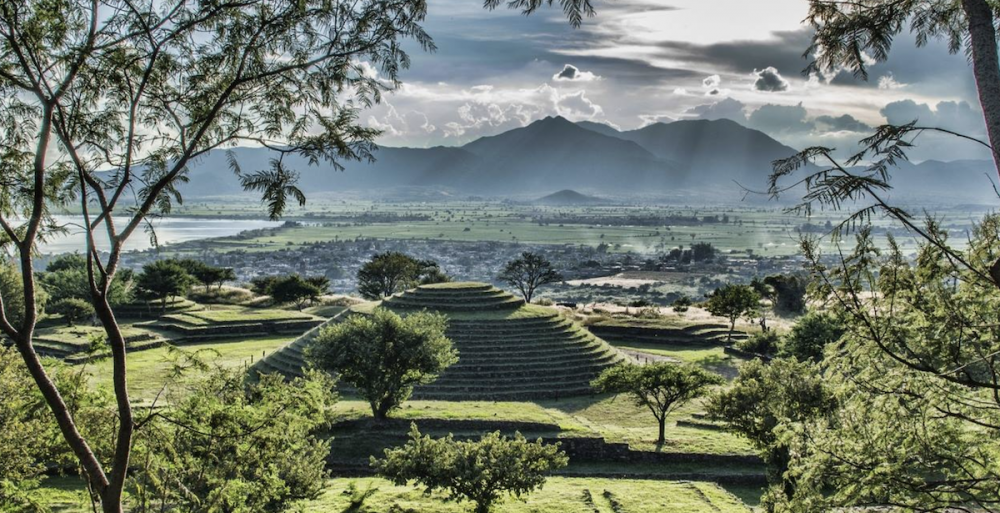 There are a series of ancient circular pyramids in Mexico, and these are a unique wonder not many know about.

Many pyramids exist in present-day Mexico. The most famous are perhaps the structures located in the ancient city of Teotihuacan, or the Pyramid of the feathered serpent—El Castillo—at the city of Chichen Itza in the state of Yucatan.

But many other similarly wonderful pyramids exist across Mexico, built by different ancient civilizations across millennia.

Mexico is a country with a vibrant history. Throughout thousands of years, many great cultures called its lands home. They built imposing monuments, temples, and pyramids inside great cities, some of which were among the largest in ancient times.

There are pyramids of all shapes and sizes in Mexico. Some are massive, while others not so much. But each and every pyramid has a story to tell.

One of the strangest pyramids ever built is probably a circular structure known as “La Iguana” in the ancient city of Guachimontones.

Guachimontones and its circular pyramid

The so-called great circular pyramid of Guachimontones is, without a doubt, one of the most interesting enigmas of the country’s pre-Hispanic architecture. Located in the state of Jalisco, Guachimontones holds many secrets and mysteries that have never been answered.

Although the archaeological site and its pyramid are not anywhere near to being the most famous in the country, the peculiar design of the pyramids makes it one of the most interesting sites in all of Mesoamerica.

The peculiar pyramid is located within the so-called archaeological site of Teuchitlán, a few hours away from the city of Guadalajara. The site obtains its name from the Teuchitlán Tradition, a complex pre-Hispanic society that inhabited areas of present-day Jalisco as early as 300 BC.

This ancient society is most notable for its circular central plazas and conical stepped pyramids.

According to researcher Phil Weigand and his wife Acelia García, these unusual structures are “unique in the Mesoamerican architectural repertoire and fact, no similar structures have been found anywhere in the world.”

This makes Guachimontones and its pyramids unique sites anywhere in the world, different from all other pyramids we’ve discovered to date.

As noted by Phil C. Weigand in the book “The Architecture of the Teuchitlán Tradition of the Occidente of Mesoamerica,” the center of the ancient city was occupied by three circular plazas each with a multi-tiered circular pyramid in the center. There are a total of 10 “Circles” within Teuchitlán, four rectangular plazas, and two ball game courts, as well as other minor structures.

Ten things about the Pyramid of Guachimontones

The ancient pyramid dubbed “La Iguana” is one of several structures built by the so-called Teuchitlán culture during the Late Formative to Classic Period. There are several “guachimontones—circular pyramids” at the site.

Guachimontones is a word that is best translated as a circular hill or circular structure. Locally, the word is used to define the pyramid at the site.

The structure was built by the Teuchitlán Tradition, which was one of the first civilizations in Western Mesoamerica, flourishing around 300 BC. The Teuchitlán culture was worked with obsidian, copper, gold, silver. Their peculiar structures attest to their great legacy in the projection of urban layout.

The concentric circular structures of Teuchitlán have a strong ritual significance. They were likely used to worship their gods, mainly Ehécatl. In fact, it is thought that the entire community sat around the circular pyramids in a major ritual to celebrate their gods. These pre-Hispanic circular enclosures in the West are rare and probably reflect cosmological principles that the peoples of Mesoamerica understood and shared.

Like many other pyramids around the world, the circular pyramid of Guachimontones (La Iguana) was well-oriented. The structure has four stairways oriented towards the cardinal points. The platforms placed on the sides display arched structures similar to a house.

Unlike other pyramids that were topped by “temples” or structures resembling rooms, at the exact center of the pyramid’s highest point, there is a hole in which a pole was inserted. The priests used this pole to simulate the flight of a bird during rituals. Experts suggest that this might have been a version of the so-called “volador ceremony,” which is practiced in Mexico to this day. As an example, see this article about the so-called Voladores.

While the pole might have severed as a platform for the Voladores, another theory proposed by J. Charles Kelley proposes that an altar of a Guachimonton might be an allusion to an artificial hill or mountain, which Mesoamerican Cosmological beliefs would explain. Like with many other cultures around the globe, mountains were locations where it was believed that the gods dwelt and from where one could discover entrances to tunnels and caves leading into the underworld.

At Guachimontones, we find several circular pyramids, the best preserved of which is circle number two, also called La Iguana. Its base, including the lateral platforms, is about 115 meters in diameter. The altar in the center measures 38.5 meters in diameter and 10 meters high, which is formed by a base of 13 steps in concentric circles and an upper altar of 4 steps on which the pole of the “flyer” was raised.

La Iguana isn’t the largest pyramid at the site. This honor belongs to Circle number one, also known as “El Gran Guachi.” This is the largest structure of its type found in the entire Western area. However, although it is the largest, it is also the most damaged by large-scale looting. El Gran Guachi measures around 125 meters in diameter and has 12 platforms, of which only five have been excavated. The central altar measures just over 50 meters in diameter.

The pyramid of La Iguana is surrounded by 10 platforms built at uniform distances, three of which are grouped on a common base.