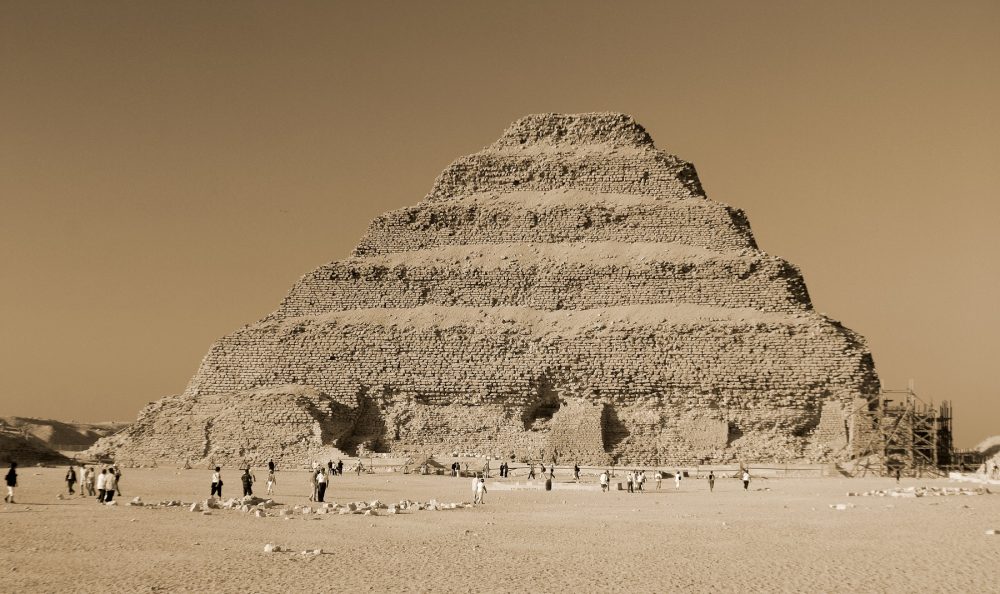 It is the oldest pyramid of Egypt, constructed generations before the Great Pyramid of Giza.

Thousands of years ago, our ancestors built pyramids across the entire planet. It’s as if for some reason, different cultures, separated by thousands of miles and without communication decided to erect massive structures randomly. Pyramids exist in North, Central and South America, they exist in Europe, and they are well documented in Asia and Africa.

For reasons we are yet unsure, pyramids were built thousands of years ago using various materials, and unknown construction techniques.

The oldest pyramids are believed to be those constructed in Brazil around 5,000 years ago dating back to around 3,000 BC.

Eventually, pyramids would appear in Central and North America. In fact, the largest pyramids in terms of volume are not those in Egypt, but those built by ancient civilizations in the American continent.

Although the ancient Egyptians did not build the largest pyramid in terms of volume, they made sure to construct the tallest and most intricately aligned pyramid in the history of humankind. The Great Pyramid of Giza is the oldest of the Seven Wonders of the Ancient World, and the only one still standing.

The pyramid is believed to have been completed around 4,500 years ago, after being commissioned (supposedly) by Pharaoh Khufu. It remained the tallest man-made building on the surface of the planet for more than 3,800 years.

Being the only pyramid in ancient Egypt with eight sides, the Great Pyramid of Giza is a wonder of ancient Egyptian architecture and engineering. Built with about 2.3 million blocks of stone Egyptologists estimate that the weight of the Great Pyramid of Giza surpasses 6.5 million tons. In terms of precision and alignment, the Great pyramid is unmatched. Its base is level to within just 2.1 centimeters (under one inch). The average deviation of the sides from the cardinal directions is 3′ 6” of arc, and the pyramid’s greatest difference in the length of its sides is 4.4 cm (around 1.73228 in).

However, building such a pyramid was no easy task and is believed to have required generations and generations of practices.

In fact, we can trace the origin of the Great Pyramid of Giza to ancient Egypt’s Third Dynasty reign of Pharaoh Djoser. When Djoser came to the throne of ancient Egypt, he ordered his royal Architect Imhotep to design a structure that would revolutionize ancient Egypt’s history forever.

Unparalleled. Unmatched. Never-before attempted. Imhotep planned, designed and built a structure that was seen as a magical stairway to heaven, a structure that the people of ancient Egypt had never before witnessed. A massive, shining, and imposing monument reaching for the sky, seen from miles away, reflecting the rays of the sun thanks to its intricately polished outer casing stones.

The Step Pyramid of Djoser appeared abruptly and rapidly. It was a complex structure and many Pharaohs after Djoser tried replicating its beauty and size. Many attempts were made but unsuccessful.

It wasn’t until Pharaoh Sneferu came to the throne of ancient Egypt that the land of the Pharaohs would see the birth of a new Pyramid.

With the arrival of King Sneferu, Egypt saw the construction of three striking pyramids: The Pyramid at Meidum and the two pyramids at Dahshur. The Bent Pyramid signalized the transition between step pyramids and smooth pyramids.

Although not perfect, the Bent Pyramid is one of the most unique pyramids in Egypt due to its obvious bet appearance which is the result of a change in the angle of inclination of the pyramid halfway through construction.

The Red Pyramid of Sneferu is heralded as the first successful smooth-sided pyramid in Egypt, and the structure that laid down the foundations for the construction of the Great Pyramid.

The birth of the Step Pyramid can be traced back to the reign of King Djoser to a period around 4,700 years ago. The completion of the step pyramid and its pyramid complex marked an abrupt yet revolutionary departure of lesser-forms of monument building in Egypt. Djoser’s Step Pyramid is the earliest colossal stone building in Egypt as well as the earliest large-scale cut stone construction.

Once completed the Step Pyramid was the tallest structure of its kind when completed, rising towards the sky with a height of 62.5 meters.

Its total volume for the time was unparalleled; the Step Pyramid was built having a total volume of 330,400 cubic meters (11,667,966 cu ft) and was built largely using limestone.

The Step Pyramid of Djoser was built in six different stages. Scholars say that the Step Pyramid started off as a kind of square mastaba which eventually evolved to a structure featuring six superimposed levels stacked one atop the other.

The completion of the Step pyramid suggests that the state and royal government of the time had an unprecedented level of control over both material and human resources.

Although the Step Pyramid and its pyramid complex are a massive feature on the Saqqara necropolis, that what lies beneath it is equally fascinating. Beneath the Step pyramid is a massive 5.7-kilometer-long underworld composed of hundreds of rooms, chambers, magazines, and tunnels. In fact, no other pyramid in Egypt features such an extensive underground world.

Just as with all other pyramids of ancient Egypt, there isn’t one historic text that mentions the construction of the Step Pyramid of Djoser. Not one ancient record details how the pyramid was built and using what types of tools.

Egyptologists theorize that the builders most likely used rollers for transport and ramps to move the heavy stones to their required height in order to build the pyramid. At the time the Step Pyramid was built, the ancient Egyptians did not possess technology such as the wheel or the pulley.

This is why the first ancient Egyptian pyramid is so fascinating. It is a complex and revolutionary structure, rightfully regarded as one of the most notable architectural advancements in the history of architecture.

After the completion of the Step Pyramid at Saqqara, no other Step Pyramid similar to it was ever successfully built in Egypt.