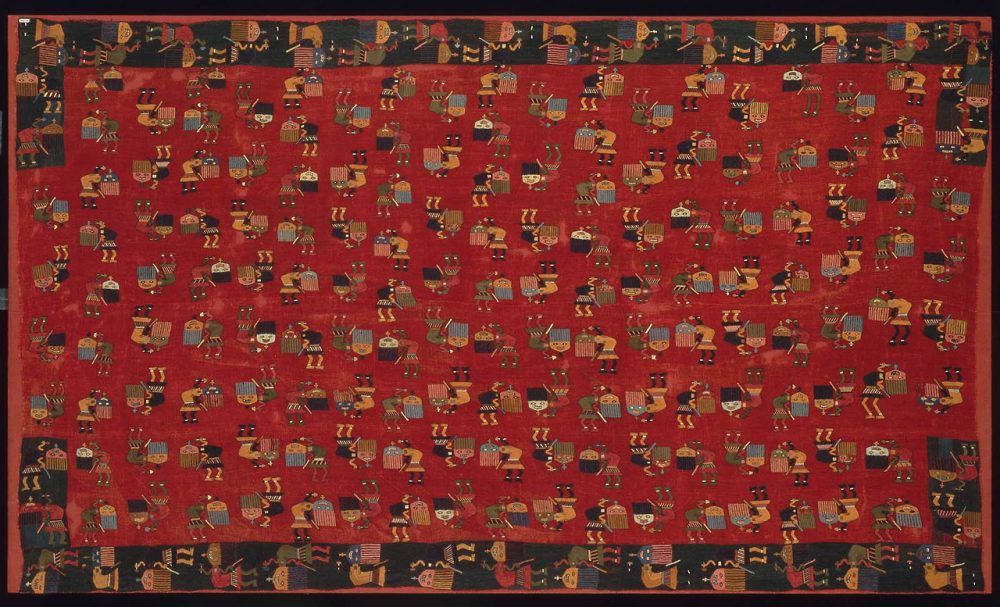 The Paracas Culture did not build massive temples and monuments. Their achievements and heritage are presented in their craftsmanship in textile and ceramics.

The Paracas Textile creations are among the most exquisite treasures found from the pre-Colombian period of South America. It is absolutely amazing how this ancient civilization created over 100 natural dyes and used them in the creation of outstanding textile pieces covered from top to bottom in quality embroidery.

The treated fabrics discovered so far include ponchos, shirts, scarves, which are not only beautifully woven but are additionally decorated with fine embroidery. A number of pictorial motifs are present on almost every known fabric. In most cases, they include a variety of human-like images, as well as those of animals, most often cats and birds.

The most impressive fact, in this case, is the quality of processing. Thanks to the numerous excavations we have a large number of Paracas textiles and it is surprising how standardized the quality is. No matter how much they were compared, no difference in quality was found.

Among the important discoveries is the variety of materials used in the Paracas texts. The most common among them are wool and cotton, but it is important to note the open mantles with gold threads and human hair.

It should be noted that cotton was the main material used for the large central pieces of the fabrics while wool was the main decorating material.

As I mentioned in the previous article, in which we discussed the Paracas culture in depth, the styles in Paracas textiles are two main – linear and block color. As you can see from the pictures in this article, most fabrics are covered in embroidery in the second style.

The Paracas culture did not bury its dead in a usual way. There is no doubt that most Paracas textiles were made for regular daily wear but it is a fact that most of the fragments archaeologists discovered had the role of funerary bundles.

What this means is that the Paracas used their beautiful textiles to cover the bodies of the dead in several layers until something explained as a funerary bundle was formed. Then, the dead were placed in 2-meter-deep holes in the ground with additional offerings like food or jewelry. No similar funerary practices have been found anywhere else around the world.

One of the greatest questions regarding Paracas textile is who actually produced it – was it a general effort or did they have special people that specialized in the production. Having seen the hundreds of bundles and the general size of most textiles, they must have had large alpaca farms for wool as well as great cotton production.

Furthermore, we need to mention the estimated time it must have taken to produce a single bundle. For example, the average funerary bundle would contain around 40 textile pieces. Each of those pieces is more than a meter long. Experts have estimated that a single bundle would take more than 10,000 working hours having that everything was handcrafted using ancient tools and not the modern convenient methods.